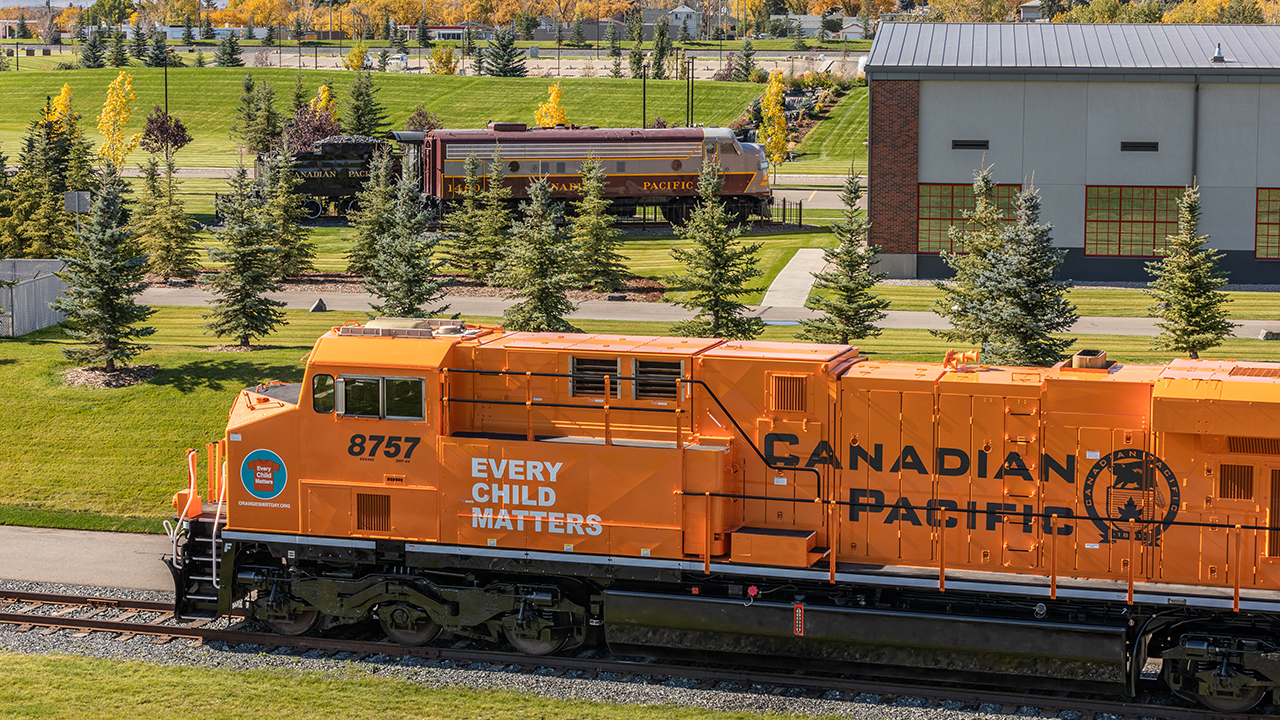 Sept. 30, 2021 is Canada’s first National Day for Truth and Reconciliation, also called “Orange Shirt Day,” an opportunity for Canadians to learn about and reflect on a dark chapter in the country’s history involving now-infamous Residential Schools, and to commemorate the victims and honor the survivors, their families and their communities, as called for by Canada’s Truth and Reconciliation Commission and Indigenous Peoples (First Nations) leaders. Canadian Pacific is participating by placing into service its “Every Child Matters” ES44AC 8757, painted in a bright orange livery with unique graphics.

“The locomotive will raise awareness as it operates across CP’s network for all of us who see it to continue on the path of learning about Indigenous Peoples and their rich history and culture,” CP President and CEO Keith Creel said. “This was truly our honor to participate. The attention and honor belongs to Canada’s First Nations and First Nations children. We are blessed to have been able to play a small role in making the tribute happen.”

The story behind CP 8757 began with 13-year-old Jacob Hoffer, an Indigenous youth who in the summer of 2021 wrote to CP asking the railroad to consider painting one of CP’s locomotives orange. CP responded positively, and sought guidance from the Orange Shirt Society, a non-profit organization that supports Residential School Reconciliation and creates awareness of the individual, family and community inter-generational impacts of Residential Schools, to develop the special livery.

The Orange Shirt Society was founded by Phyllis Jack Webstad, who told her story about having her orange shirt, a gift from her grandmother, taken away from her on her first day of Residential School in 1973, when she was six years old.  Webstad is Northern Secwpemc (Shuswap), from the Stswecem’c Xgat’tem First Nation (Canoe Creek Indian Band).

The result of Jacob’s outreach is that 8757 now proudly displays the Orange Shirt Society logo on the side of its nose; the locomotive will be commissioned onto the CP network on Sept. 30. On Sept. 27, Jacob and his mom, Darcy, went to CP headquarters in Calgary to participate in the unveiling of the locomotive he helped make a reality.

CP said it is “proud to support the efforts of the Orange Shirt Society to create meaningful discussion about the effects of Residential Schools and the legacy they have left behind. This locomotive will serve as a constant reminder of the work ahead, but also draw on the inspiration that connected Jacob, CP and the Orange Shirt Society, that ‘Every Child Matters.’ This, along with CP’s commitment to host the Orange Shirt Society logo on its corporate vehicles, including the locomotive, will go a long way to raise interest and awareness across Canada.”

“The orange locomotive is a symbol of CP’s commitment and willingness to participate in the reconciliation process with Indigenous Canadians,” said Orange Shirt Society President Jerome Beauchamp. “This is exciting, and provides CP, as a corporation, an opportunity to learn more and continue to act on its commitment to move reconciliation with Indigenous Canadians forward. We at the Orange Shirt Society are excited to partner with CP and would love to help CP along its journey. Movement along the reconciliation path involves three steps: Education about the impact of Residential Schools, becoming familiar with the Truth and Reconciliation Commission’s Calls to Action, and implementing those Calls to Action in your corporation.”

Editor’s Note: A Canadian colleague writes: “Truth and Reconciliation Day is our latest attempt to come to terms with the brutal history of Canadian First Nations people at the hands of government and other groups like the Catholic Church. While the history has many areas that could be discussed, the most sad and terrible is the legacy of Canadian Residential Schools. These government-sponsored and largely church-run schools were explicitly designed to “take the native out of the Indian.” This manifested in the Royal Canadian Mounted Police forcibly taking native children from their families and forcing their parents to live on reservations. Many brutal abuses—physical, sexual and emotional—were inflicted upon these innocent children by nuns and priests; the worst is that many thousands died in the “care” of these schools. Their deaths were treated very lightly, and the dead children were buried in unmarked graves on the back of school properties. Some notification would be sent to the reservations to let the parents know that their child had died. Occasionally, the school would demand that the parents ride from the reservation—with a permit—to reclaim their child’s body. This is our national shame. Canadian Pacific has had a long history of outreach to native groups. During my time at CP, I had many meetings and interactions with the native band councils and with employees who were First Nations. Under the leadership of CEOs Rob Ritchie and later Fred Green, CP made a deliberate push to advertise all job openings on reservations. This resulted in hundreds of First Nations people landing starting their first job with CP. It is with great pride to see CP, under Keith Creel’s stewardship, step up again as leader in the reconciliation of Canada’s terrible history with its First Nations.” – William C. Vantuono