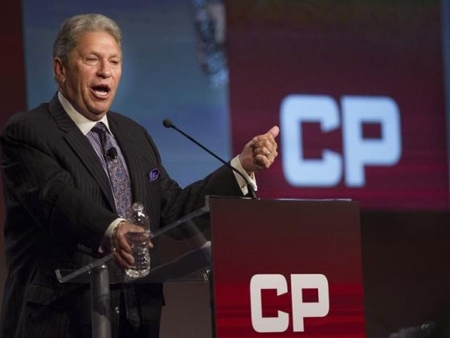 Despite revenues of $1.65 billion that were little-changed compared to the prior-year period, CP’s net income rose to a record quarterly high of $390 million, or $2.36 per diluted share, a 12% improvement. Adjusted earnings per share soared 16% to $2.45. Operating income climbed 10% to $646 million, and the operating ratio fell to a second-quarter record 60.9%, a 420-basis-point improvement.

“CP remains disciplined during this period of economic uncertainty in identifying opportunities to control costs and improve efficiency to offset near-term headwinds,” said CP CEO and Railway Age 2015 Railroader of the Year E. Hunter Harrison. ‘CP’s achievement on the bottom line came even as a sluggish North American recovery and stubborn global economic softness weighed on commodity prices, forcing producers to reduce output and cut shipments. Even in the face of this economic slowdown, CP’s commitment to providing the best service at the lowest cost will continue to serve us well moving forward. The positive CP story is based on a business model that allows for flexibility. We are nimble, efficient, and able to respond to the ever-changing economic climate.”

For 2015, CP said it now expects revenue growth of 2-3% percent, an operating ratio t below 62%, and annual adjusted diluted EPS of $10.00 to $10.40. Key assumptions for this updated full-year 2015 financial expectations include a Canadian to U.S. dollar average exchange rate of $1.25; an effective income tax rate (excluding discrete items) of 27.5%; defined benefit pension expense of approximately $35 million, compared with 2014 pension income of $52 million; capital expenditures of approximately $1.5 billion; and average OHD (On Highway Diesel) price of U.S. $2.80-$2.90. CP’s current share repurchase plan is expected to be completed by calendar year-end 2015.

“CP reported solid results, beating our estimates for EPS and operating income but missing consensus slightly,” said Cowen and Company Managing Director and Railway Age Wall Street Contributing Editor Jason Seidl. “The company’s updated 2015 guidance reflects tempered revenue growth, which should not come as a big surprise in the current environment, and an EPS range not inconsistent with our estimate but somewhat below street expectations.”

“CP reported Adjusted 2Q15 EPS of $2.45, up 16% year over year, above our $2.38 estimate, but just shy of the $2.46 consensus estimate,” Seidl noted. “The operating income grew 10% to $646 million, compared to our and street expectations of $630 million and $665 million, respectively. Revenue declined 2% to $1.65 billion and was largely in line with our estimate but slightly below the consensus estimate of $1.67 billion. The 60.9% operating ratio (OR) represented a 420 basis point year over year improvement and was 100 basis points better than our assumption and 60 basis points better than the implied consensus OR. This also represented the best second-quarter OR in company history.

While the company had a slight top-to-bottom miss to consensus and offered guidance somewhat below street expectations, we believe many investors will be fairly pleased that CP was able to post a strong OR, reflective of its ability to right-size its network in the face of sluggish traffic, albeit not as quickly as CN. We do not expect a big reaction from CP shares, but if they come under pressure we would view it as a unique buying opportunity.”

In related news, Andrew F. Reardon was unanimously elected Chairman of Canadian Pacific Railway Ltd. CP added that it will no longer be exempt from the regular U.S. Securities and Exchange Commission reporting requirements in 2016 because a majority of its board was comprised of U.S. citizens or residents as of June 30, 2015 (the relevant date for determining foreign private issuer status for U.S. SEC reporting purposes in 2016). This follows a determination that the resignation of Stephen Tobias from the board occurred on July 3, 2015.