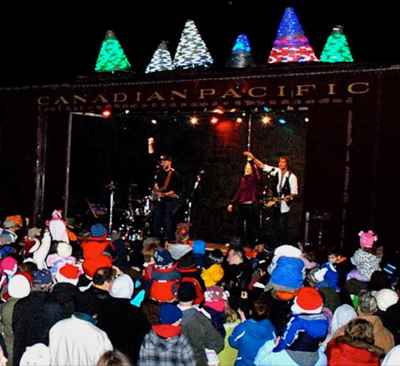 Canadian Pacific’s annual Holiday Train program, now in its 15th year, is one of the longest-running fundraising programs in North America. Each 1,000-foot Holiday Train—one operating in Canada, one in the U.S.— consists of 14 brightly decorated railcars, including a modified boxcar that has been turned into a traveling stage for performers.

The Holiday Train program collects money and food for local food banks, and raises awareness for food banks and hunger issues. The two trains visit more than 150 communities each year and travel a combined distance of approximately 6,000 miles. CP shop forces have updated the thousands of LED lights that adorn the sides of both trains with new holiday designs. Each train

“The Holiday Train Program began in 1999 with a handful of communities and a few lights on a freight train,” said CP spokesman Ed Greenberg. “Today, with its hundreds of thousands of festive lights and a live show featuring well known performers, it’s one of Canadian Pacific’s main ambassadors in working with communities in Canada and the United States and is the only fundraiser of its kind for food banks in North America.” In the past 15 years, the program has raised $7.4 million and collected three million pounds of food for local communities.

The 2013 CP Holiday Train program launches on Nov. 25 in Kahnawake, Quebec, formally kicking off a three-week journey, with a first U.S stop in Scranton, Pa. The Canadian train will wrap up its journey Dec. 16 in Port Coquitlam, B.C., while the U.S. train will journey across the U.S. Northeast and Midwest before its final show December 19 in Weyburn, Sask.

Musicians traveling aboard the trains will play more than 150 free concerts from their boxcar stage. This season, “An A-list of musicians will headline the CP Holiday Train events in Hamilton, Calgary, and Cottage Grove,” Greenberg said. “Sheryl Crow and Sarah McLachlan will be joined by Tom Cochrane with Red Rider, The Tenors, Great Big Sea, Matt Dusk, Natalie MacMaster, and Take 6 in celebrating our 15th anniversary. These stars will help CP raise further awareness for charities that help fight hunger in Canada and the U.S.”

“I thank these internationally-renowned artists for joining us in shining a bright spotlight on this important issue,” said CP chief executive E. Hunter Harrison.

The Hamilton, Ont., event takes place Nov. 30 at Gage Park with Tom Cochrane with Red Rider, Great Big Sea, and Natalie MacMaster. The Calgary event is scheduled for Dec. 7 at Anderson LRT Station with Sarah McLachlan, The Tenors, and Matt Dusk. The Cottage Grove, Minn., event takes place on Dec. 14 at CP Yard with Sheryl Crow and Take 6. Gates open at 4:00 p.m., the concert begins at 5:00 p.m. The Hamilton and Calgary events will be hosted by Peter Mansbridge, chief correspondent for CBC News and anchor of The National, CBC Television’s flagship nightly newscast.

“Prior to each concert, these communities will be able to experience The North Pole Station, a magical village that will feature family-oriented interactive activities, ice carving, hot chocolate, and a chance for the kids to visit Santa before making their way to the concert stage,” Greenberg said. “While the events are free, those attending are asked to make a cash donation or bring non-perishable food items. All donations stay with the food shelf in the community where they’re donated. Items like infant formula, canned meats, and spaghetti sauce are in particular demand for the millions of North Americans who turn to food banks each month.”

For additional information, photos, a route map, and downloadable pictures of the two trains, visit: www.cpr.ca. Supporters can also join the Holiday Train on Facebook and follow the two trains on Twitter @CPHolidaytrain #CPHolidayTrain.