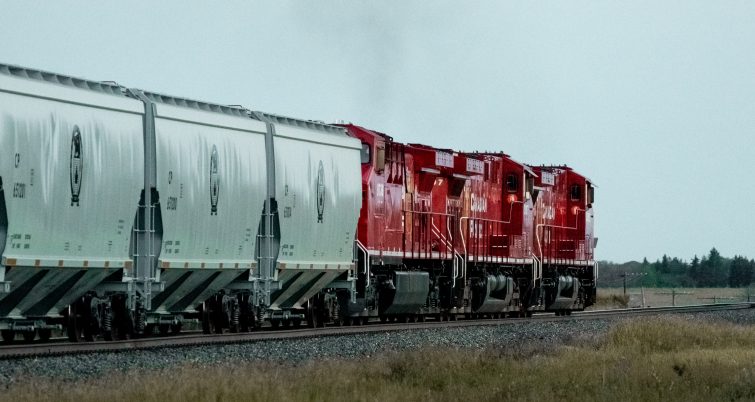 Canadian Pacific moved more grain in April 2020 than in any month during its 139-year history. Photo via CP.

“CP’s family of professional railroaders continues to deliver for our customers and the economy during this extremely challenging COVID-19 period,” said Joan Hardy, Vice President Sales and Marketing Grain and Fertilizers. “By working collaboratively with our customers from field to port, we have been able to find synergies and efficiencies to drive the grain supply chain forward. CP’s service excellence and best-in-class team have enabled us to move more grain steadily throughout this crop year, with an impressive surge in April as the Port of Thunder Bay opened for the spring shipping season.”

CP’s performance in April comes on the heels of CP announcing that January, March and Q1 2020 also saw record movements. At 21.4 MMT of grain and grain products shipped crop year to date, CP has moved 51% of the grain and grain products originating by rail in Canada, 6% more grain this year than at the same point last year, and 8% more than the previous three-year average. Based on metrics generated by the grain shipping community, CP has moved 54% of the whole grains moved by rail from the Canadian prairies this crop year. CP foresees strong grain shipping for the remainder of the 2019-2020 crop year now that the Port of Thunder Bay has reopened and is operating at maximum capacity and efficiency.

“CP has been moving significant amounts of grain throughout the year and will continue to do so as farmers deliver the balance of last year’s crop and begin planting for the 2020-2021 crop year,” said Hardy. “CP is proud to be working in lockstep with the entire supply chain in delivering for North Americans and beyond.”

The supply chain advancements by CP and its customers are yielding significant productivity gains from field to rail to port. CP’s investment in high-capacity hopper cars will see 5,900 new cars added to the railway’s grain shipping fleet. CP’s fleet of new grain cars, now at more than 2,500, is adding more than 1.1 tonnes of extra grain per railcar compared to the same period last year. The new hopper cars can carry 15% more volume and 10% more weight compared to the older cars they are replacing.