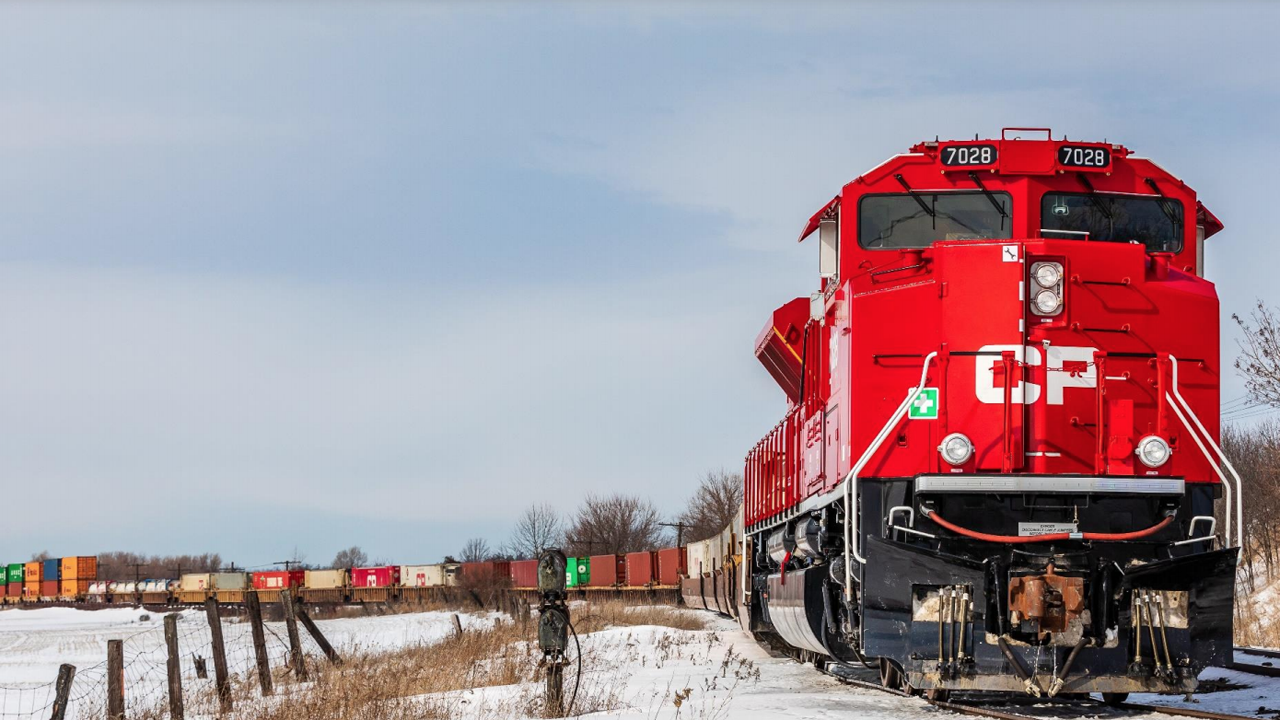 “The strong demand environment, particularly across bulk, merchandise and domestic intermodal, coupled with our commitment to the foundations of Precision Scheduled Railroading enabled our success in the first quarter,” Canadian Pacific (CP) President and CEO Keith Creel reported during the merger-bound railroad’s earnings announcement.

For the first three months of 2021, CP revenues were C$1.959 billion, down 4.1% compared with C$2.043 billion in the prior-year period, with revenue ton-miles (RTM) flat. According to the Class I railroad, the “decrease was primarily due to the unfavorable impact of the change in FX [foreign exchange], and lower fuel surcharge revenue as a result of the timing of recoveries.”

CP also reported diluted earnings per share of C$4.50, up 51% vs. first-quarter 2020, and net income of C$602 million, up 47.19% from first-quarter 2020. The increases were “primarily due to FX translation gains on debt and lease liabilities in 2021, compared to FX losses during the same period of 2020, partially offset by lower operating income,” the railroad said.

In first-quarter 2021, average train weight increased by 7% to 9,795 tons, and average train length increased by 8% to 7,972 feet, from the prior-year period. The railroad attributed the increases to “improvements in operating plan efficiency and continued improvements in operational efficiency for Grain and Potash trains, in each case compared to the same period in 2020.”

“The momentum we ended the first quarter with has enabled a strong start to the second quarter, and we remain committed to delivering for our customers, employees, shareholders and communities,” Creel said. “We are excited about the unique opportunities ahead in 2021 and the strong base demand environment.”

On the same day as the earnings announcement, April 21, Creel issued a letter to his counterpart and intended merger partner, KCS President and CEO Pat Ottensmeyer, stating that CP is fully committed to the CP/KCS transaction, that the two companies are “a perfect match,” and that while respecting KCS’s duty to its shareholders to evaluate CN’s rival offer, CN’s counter is “plainly inferior.”

Looking ahead, CP reported that it expects high single-digit volume (RTM) growth, and double-digit adjusted diluted EPS growth relative to 2020’s adjusted diluted EPS of C$17.67. In addition, it will continue to “invest in service, productivity and safety,” with capital expenditures slated to reach C$1.55 billion in 2021. The railroad noted that its “guidance does not include any potential impacts from the proposed Kansas City Southern acquisition.”

“Despite the outperformance in Q1 that came in above both our estimates and consensus, all eyes were on the proposed [merger] transaction,” reported Cowen and Company analysts Jason H. Seidl (Managing Director and Railway Age Wall Street Contributing Editor), Matt Elkott and Elliot Alper. “The gloves have been taken off, to say the least, but based on the call, it is clear to us that CP will not increase its offer for now as it is confident the STB would block CN’s proposed transaction. [We] [r]eiterate Outperform and $431 PT.”

• “To begin the call, CP CEO Keith Creel addressed the elephant in the room and laid out the company’s response to the offer that CN proposed on Tuesday [April 20]. CP was not surprised that CN stepped in, although was clearly taken back at the price at which CN came in at. The amount of leverage CN would plan to take (4.6x in 2021), clearly does not align with CP’s leverage management, and CP stated that taking on that kind of debt for a single transaction would likely be at the cost of growth.
• “After hearing Creel’s remarks, it is apparent to us that CP will not be making a counter offer (a move likely to put near-term pressure on KCS’s shares) and letting the KCS Board decide on next steps, given CP’s belief that the CN/KCS combination is anti-competitive. He did however keep the door open a bit when he talked about the fact that their prior estimates for revenues synergies were ‘absolutely understated,’ and there was a big
opportunity for CP/KSU to ‘over achieve.’ Hence, we could see CP sharpen the proverbial pencil on the IRR of the deal if their hands are forced by the KCS board and the STB [Surface Transportation Board].
• “CP cried foul to many of CN’s claims about overlap in customers, calling CN’s commentary that only 65 miles overlap in Louisiana as disingenuous. In fact, CP’s CEO stated there were more than 100 combinations in a CN/KCS potential merger that would be considered overlap. We believe that CN offers more overlap with customers than CP, but acknowledge that more due diligence is needed on our end to confirm this belief.”

• “Adjusted EPS of CAD $4.48 came in above our estimate and consensus expectations. Adjusted OR of 60.2% beat our estimate of 61.1%; CP did an impressive job at managing profitability in the quarter despite the macro-challenges associated with Q1.
• “Total revenues declined 4% in the quarter, negatively impacted by FX (-2%) and fuel (-2%). Automotive (+32%), Fertilizers & Sulphur (+15%), and Grain (+10%) were the outperformers in the quarter on an FX-adjusted basis.
• “CP continues to demonstrate outperformance among its railroad peers and the company’s ability to navigate through choppy macro waters is impressive to say the least. They have posted the strongest results out of the Class I’s, and management’s bullish tone for the rest of 2021 is encouraging, in our view. 2021 guidance remained intact which calls for double-digit adjusted EPS growth.
• “We are increasing our 2021 and 2022 EPS estimates to USD $16.60 from USD $16.40, and to USD $18.60 from USD $18.55, respectively. Recall, we introduced our 2023 EPS estimate of USD $20.50 following the announcement of the intended merger between KCS and CP, which remains intact.”