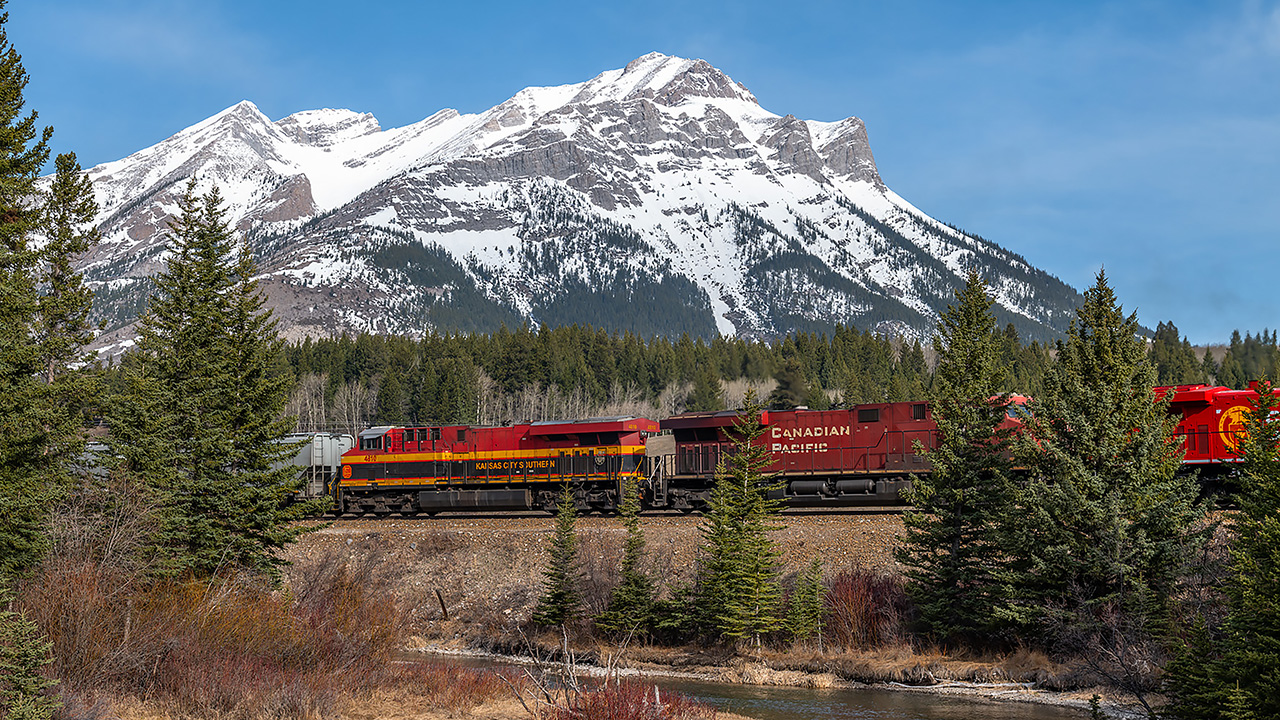 For those of you who don’t read or speak Latin (including the author), terminabitur translates to “terminated” or “discontinued.” Resumo translates to “resumed” or “picked up where we left off.” E duobus, unum translates to “from two, one.” In this case, it translates to “CPKC,” provided the shareholders and—most critical—the Surface Transportation Board give their approbatio (approval).

On Sept. 15, sooner than expected, Kansas City Southern’s Board of Directors unanimously determined that the acquisition proposal KCS received from Canadian Pacific on Sept. 12, 2021 continues to constitute a “Company Superior Proposal” as defined by KCS’s merger agreement with CN, and entered into a “waiver letter agreement” with CN under which CN agreed to waive a five-business-day-match period and KCS agreed to terminate the CN merger.

The CP-KCS deal is a stock and cash transaction representing an enterprise value of approximately US$31 billion, which includes the assumption of $3.8 billion of outstanding KCS debt. It values KCS at $300 per share, representing a 34% premium, based on the CP closing price on Aug. 9, 2021, the date prior to which CP submitted a revised offer to acquire KCS, and KCS’ unaffected closing price on March 19, 2021.

KCS has officially terminated the CN merger agreement and is re-entering into a merger agreement with CP. Upon closing of CP’s Surface Transportation Board-approved voting trust, each share of KCS common stock will be exchanged for $90 in cash and 2.884 shares of CP common stock. In addition, holders of KCS preferred stock will receive $37.50 in cash for each share of KCS preferred stock held. Closing will be subject to approval by the stockholders of CP and KCS, receipt of regulatory approvals and other customary closing conditions, including Mexican regulatory approvals.

Immediately following the closing into trust, KCS common shareholders are expected to own 28% of CP’s outstanding common shares, “providing the ability to participate in the upside of both companies’ growth opportunities,” CP and KCS said. “The combined company is expected to create annualized synergies of approximately $1 billion over three years, and is expected to be accretive to CP’s adjusted diluted EPS in the first full year following CP’s acquisition of control of KCS, and generate double-digit accretion upon the full realization of synergies thereafter.”

CP and KCS said expect the transaction to close and KCS shareholders to receive their consideration in first-quarter 2022. In August, the STB reaffirmed that its pre-2001 rules would govern its review of the CP-KCS transaction. STB review of CP’s proposed control of KCS “is expected to be completed in the second half of 2022. Upon obtaining approval, the two companies will be integrated fully over the ensuing three years, unlocking the benefits of the combination.”

To fund the stock consideration of the merger, CP will issue 262 million new shares. The cash portion will be funded through a combination of cash-on-hand and raising approximately $8.5 billion in debt, for which financing has been committed. CP will assume approximately $3.8 billion of KCS’ outstanding debt. Following the closing into trust, CP expects that its outstanding debt will be approximately $20 billion.

“Pro forma for the transaction, CP estimates its leverage ratio against 2021 estimated Street consensus EBITDA to be approximately 3.9x with the assumption of KCS debt and issuance of new acquisition-related debt,” CP noted. “In order to manage this leverage effectively, CP will continue to temporarily suspend its normal course issuer bid program, and expects to produce approximately $7 billion of levered free cash flow (after interest and taxes) over the next three years. CP estimates its long-term leverage target of approximately 2.5x to be achieved within 24 months after closing into trust. The combined company will remain committed to maintaining strong investment grade credit ratings while continuing to return capital for the benefit of shareholders.”

KCS is paying CN $1.4 billion, which includes a breakup fee of $700 million plus a $700 million refund of the money previously paid by CN to KCS to reimburse the termination fee KCS paid to CP in May. CP will reimburse KCS both payments; KCS will be obligated to refund CP’s reimbursement “under certain limited circumstances, including if KCS terminates the CP merger agreement to accept a superior proposal,” which for all intents and purposes is highly unlikely.

CN is not obligated to pay any termination fees, effectively snuffing out one of activist investor and “beneficial owner” TCI Fund Management Limited’s complaints that CN is “committing billions of dollars to an ill-conceived pursuit of an unattainable asset.”

“Our path to this historic agreement only reinforces our conviction in this once-in-a-lifetime partnership,” said CP President and CEO Keith Creel (Railway Age’s 2021 Railroader of the Year). “We are excited to get to work bringing these two railroads together. By combining, we will unlock the full potential of our networks and our people while providing industry-best service for our customers. This perfect end-to-end combination creates the first U.S.-Mexico-Canada rail network with new single-line offerings that will deliver dramatically expanded market reach for CP and KCS customers, provide new competitive transportation options, and support North American economic growth.”

“We are glad to be partnering with CP to create a railroad that is able to compete by providing the best value for the transportation dollar,” said KCS President and Chief Executive Officer Pat Ottensmeyer (Railway Age’s 2020 Railroader of the Year). “The CP-KCS combination will not only benefit customers, labor partners, and shareholders through new, single-line transportation services, attractive synergies and complementary routes, it will also benefit KCS and our employees by enabling us to become part of a growing and truly North American continental enterprise.”

“While we are disappointed that we will not be able to deliver the many compelling benefits of this transaction to our stakeholders, the decision to bid for KCS was a bold and strategic move that still resulted in positive outcomes for CN,” said CN President and CEO JJ Ruest (Railway Age’s 2019 Railroader of the Year). “We believe that the decision not to pursue our proposed merger with KCS any further is the right decision for CN as responsible fiduciaries of our shareholders’ interests. CN will continue to pursue profitable growth and opportunities for excellence as a leading Class I railroad, and we look forward to outlining more details on our strategic, operational and financial priorities in the near future.”

CN added that while it “continues to believe that a CN-KCS combination would have enhanced competition and delivered many other compelling benefits for stakeholders, there have been significant changes to the U.S. regulatory landscape since CN launched its initial proposal that have made completing any Class I merger much less certain, including an Executive Order focused on competition issued by President Biden in July.”

CN added that it “appreciates the broad array of stakeholders who wrote more than 1,750 letters of support for participating in this important engagement process with the STB. Throughout the proposed merger process with KCS, CN made numerous unprecedented pro-competitive commitments to provide all market participants, railroads and customers with enhanced route choices, pricing transparency and a fair chance to compete. Given comments made by the STB in its decision on the joint CN-KCS voting trust application, CN firmly believes that no Class I merger with KCS should be approved without those public interest and enhanced competition commitments. CN will continue to actively participate in this important dialogue to ensure that all regulatory rules are enforced fairly, and customers do not suffer anti-competitive effects arising from a combination between CP and KCS.”

The merged railroads, to be named CPKC (Canadian Pacific Kansas City) as originally planned, “will, while remaining the smallest of six U.S. Class I railroads by revenue, will operate approximately 20,000 miles of rail, employ close to 20,000 people, and generate total revenues of approximately $8.7 billion, based on 2020 actual revenues,” the two Class I’s noted. “The CP-KCS combination is expected to create jobs across the joined network. Additionally, the companies expect efficiency and service improvements to achieve meaningful environmental benefits.”

“Customers would not experience a reduction in independent railroad choices as a result of the transaction,” both carriers stressed. “ We have committed to keep all existing freight rail gateways open on commercially reasonable terms, while simultaneously competing aggressively to attract traffic via new single-line north-south lanes between Canada, the Upper Midwest and the Gulf Coast, Texas, and Mexico.”

As in the original CP-KCS merger agreement, Keith Creel will serve as CPKC CEO. Calgary will be the global headquarters of CPKC, and Kansas City, Mo., will be the U.S. headquarters. The Mexico headquarters will remain in Mexico City and Monterrey. CP’s current U.S. headquarters in Minneapolis-St. Paul “will remain an important base of operations,” and four KCS Directors will join CP’s expanded Board “at the appropriate time, bringing their experience and expertise in overseeing KCS’s multinational operations.”