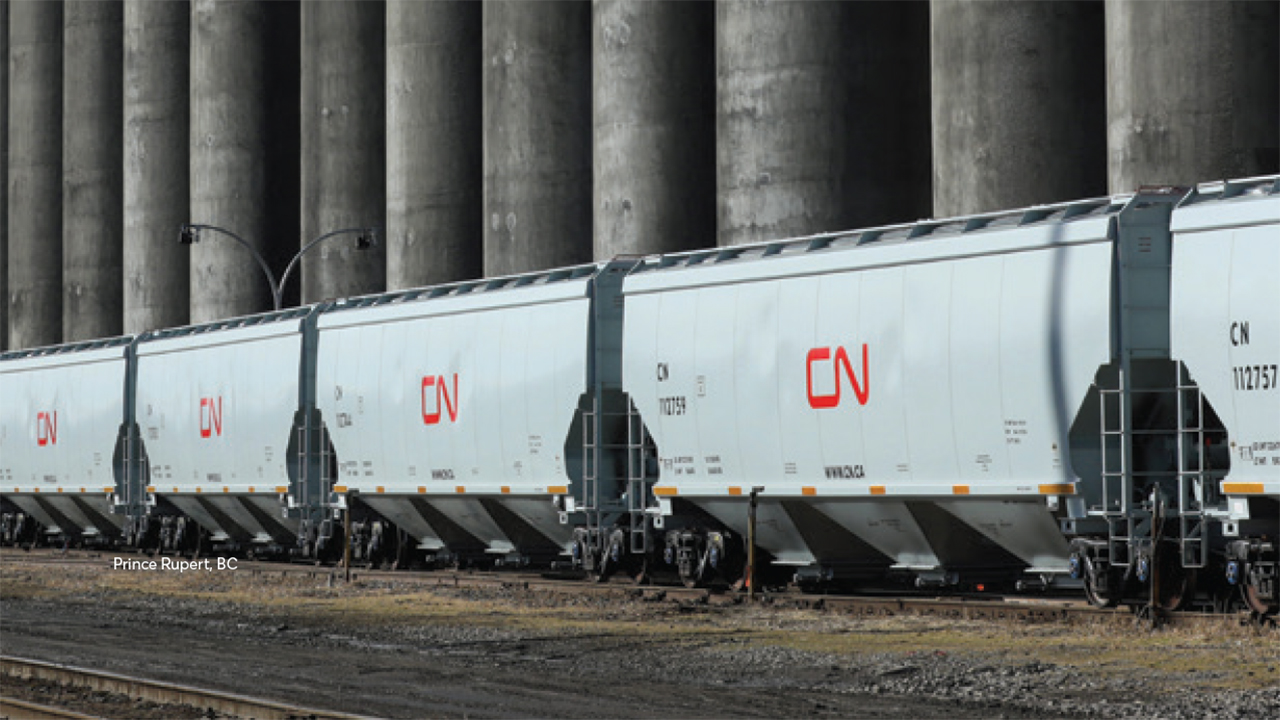 Since 2018, the Canadian government, through changes in the Canadian Transportation Modernization Act, has required Canada’s railroads to publish Grain Plans for the forthcoming crop year. Grain is crucial to Canada’s economy; as such, its transportation is heavily regulated—much more so than in the U.S. CN has just published its 2022-2023 Grain Plan, which “describes CN’s preparations for moving a western Canadian grain crop that is expected to rebound from last year’s drought-impacted levels,” the railroad said.

“Movement of Western Canadian grain via carload on CN in 2022–23 is forecast to rebound to 24.5–27.0 million metric tons (MMT), with grain shipped via container direct from Western Canada in addition to these volumes,” CN said. “We expect intense pressure on Canada’s transportation system during the 2022–23 crop year, especially with respect to rail movement to Canada’s West Coast ports. At this point, based on current demand forecasts and the best economic and market information available, we expect that total demand for rail capacity between Edmonton and the ports of Vancouver and Prince Rupert will exceed network capacity during some weeks in the fall of 2022 and in early 2023.”

CN’s Grain Plan (downloadable below), the railroad noted, “sets out the specific steps CN is taking to ensure it can meet the forecast demand from the grain sector in the new crop year. For example, the Plan provides details on workforce recruitment, adding 57 new high-horsepower locomotives and new rolling stock, all to support the delivery of grain and other commodities. Faced with growing demands from all sectors, the Plan also calls for greater balance across all rail corridors to reach the upper end of the maximum sustainable supply chain capacity range. That requires making better use of the eastern Canadian network, including Thunder Bay when the St. Lawrence Seaway System is open to navigation, and direct rail shipments to St. Lawrence River ports when the Seaway closes for winter.”

The Grain Plan also includes increasing CN’s active operating crew base in Western Canada and hiring more than 500 new employees, on top of the 850 it has already hired.

CN continues to add new high-capacity (5,431-plus-cubic-foot) covered grain hopper cars to its fleet to expand equipment capacity. The 55-foot cars, manufactured by National Steel Car and TrinityRail, can carry up to 15% more grain than their longer predecessor “legacy” cars, thus increasing volume but not train length, necessarily. CN is taking delivery of 500 of these cars this year, will add another 500 in early 2023, and another 750 through 2024. Since 2018, the railroad has acquired 3,000.

CN’ described the  Grain Plan as being prepared “through an extensive consultation process and input from key stakeholders. The plan reviews CN’s performance during the past crop year and assesses CN’s ability to move anticipated levels of grain during the upcoming crop year. It also explains specific steps CN is taking to ensure it has the capacity to move grain safely and efficiently on behalf of farmers, customers and supply chain partners, and to respond to the known and unknown challenges that North American winters bring.”

“We are ready,” CN Assistant Vice President Grain David Przednowek told Railway Age. “Last year was an exception year, with trade flows massively disrupted, on top of the drought conditions. This season, we are looking to help the entire grain supply chain, both domestic and export, deal with continued disruptions  caused by, among other factors, war overseas.” Przednowek, who hails from Winnipeg and has a grain farming heritage (his family is in the business), joined CN in 2014. “This is my ninth harvest,” he said. “I know this business inside and out. It’s challenging but exciting.”

“The strength of our agriculture sector is critical to Canada’s economy and to feeding the world,” said CN President and CEO Tracy Robinson. “Our team at CN is confident that the adjustments we have made to our operations and planning heading into this fall, combined with the investments made with an eye to future economic growth, will enable us to deliver strong results in 2022–23 for Western Canadian agriculture.

“Having grown up on a grain farm in Saskatchewan, I understand how important agriculture is to Canada’s economy. Agribusiness on the Prairies is continually evolving, and CN is evolving along with it. Farming and railroading are both very capital-intensive businesses, and the past decade has seen investment in all aspects of the end-to-end grain supply chain. Grain producers, grain companies, and railways have invested heavily in technology and infrastructure, with $27 billion of capital investment by CN. This combined effort led in part to CN’s record grain movement during the 2020–21 crop year, demonstrating that strategic investment and coordination can yield great results.”

Robinson described “the reality of weather impacts on farming and railroading. This past year served as a reminder about how extreme weather can impact the end‑to‑end supply chain Extreme heat and fires last summer in British Columbia had a devastating impact on many communities that CN operates in and severely disrupted rail movement. The worst drought in 20 years drastically reduced grain production across Western Canada. CN experienced an unprecedented three‑week disruption to our rail traffic in Southern British Columbia in November and early December due to flooding and track washouts, followed by one of the worst winters in recent memory.”

For the 2022-2023 crop year, “we know that there will be predictable events that CN can plan for and mitigate to the extent possible,” Robinson noted. “But last year reminded us that there is always the potential for unpredictable events that will impact the quality of service that CN can deliver. A lot can happen over an 18,000-plus-mile rail network over the course of 12 months. We must all keep that in mind when evaluating end‑to‑end supply chain performance.

“The pandemic has produced one of the most significant shocks ever to hit global supply chains, and COVID will continue to be a wild card in the months and years to come. Now, the war in Ukraine has fundamentally altered commodity trade flows for the foreseeable future and will put pressure on Canada’s transportation network. These events challenge long‑established assumptions about trade flows and confirm we must make our business plans and capital investment decisions in a global context. It is not business as usual.”

In addition to consulting with its grain customers and other stakeholders, CN engaged with its Agricultural Advisory Council, which it describes as “a cross‑section of industry leaders from across Western Canada to provide ongoing advice and feedback on grain transportation and CN’s interaction with producers. CN meets with its Agricultural Advisory Council quarterly on routine planning items, and at other times throughout the year as needed.”