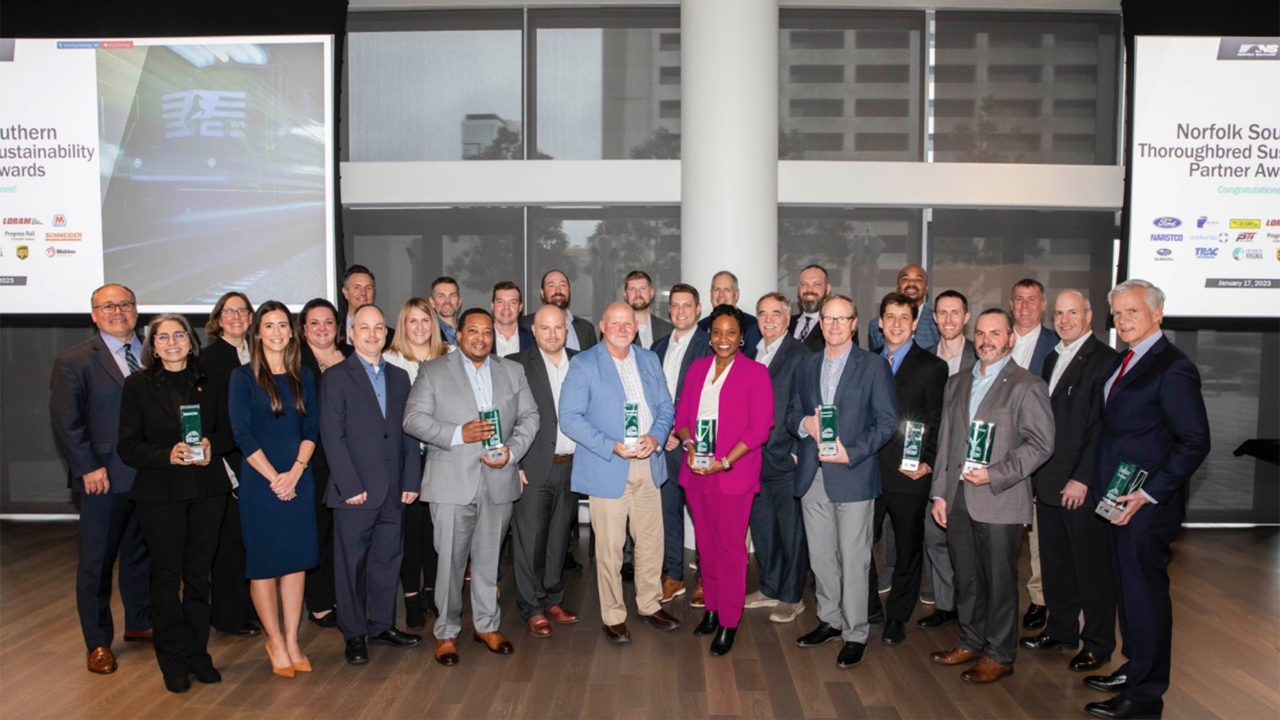 NS on Jan. 17 honored 15 customer and supplier recipients of its inaugural Thoroughbred Sustainability Partner Awards, which honor corporate programs in three categories: achieving “significant energy efficiency savings”; implementing “innovations that have significantly contributed to a more sustainable future”; and working to “promote stewardship of the environment.” (Photograph Courtesy of NS)

BNSF operating teams “are making progress in generating improved service performance following challenging weather conditions at the end of December,” the Class I railroad reported in a Jan. 20 online customer notification. Overall car velocity is up more than 8% for the week ending Jan. 17 vs. December and “remains relatively consistent” with the prior week, according to BNSF. Terminal dwell was up over the previous week, but the railroad said it was also improved from the previous month.

“Our local service compliance measure, which reflects our efficiency in handling carload freight, continues to improve,” BNSF reported. “We’ve sustained our highest local service scores over the past 90 days, currently averaging over 90%.”

BNSF also reported that the heavy rain in northern California recently triggered a rockslide, resulting in a Jan. 14 derailment on its trackage rights between Keddie and Sacrament. The railroad said it diverted traffic from the “busy corridor” until service was restored Jan. 19, and noted that customers with shipments moving between the Pacific Northwest and California “should expect lingering delays until traffic flows fully normalize early next week [week of Jan. 22].”

Additionally, BNSF operating teams responded to winter weather-service related challenges across its Northern Region. “Our ability to move train crews and other personnel was challenged, particularly in Nebraska, where freezing rain caused significant road closures,” the railroad said. “Winter Action Plans were activated to ensure the safety of our workforce and that resources were in place to address service disruptions caused by the weather. As warmer temperatures return to the region, we expect to generate significant velocity gains and improved fluidity this weekend [Jan. 21-22].”

According to BNSF, intermodal operations “continue to perform strongly,” with average velocity over the past seven weeks up nearly 15% over the average from June to November 2022. Hub operations, as well, “are fluid” through the key inland facilities in Chicago, Alliance, Memphis and Kansas City.

“As we move further into 2023, we continue to expect to deliver strong performance in the weeks and months ahead,” BNSF told its customers.

“Last week, CP 2816 [the Empress] was lifted off its drivers for work on its running gear: the first time a steam locomotive has been lifted at Ogden in 65 years,” CP reported via Twitter on Jan. 20. Steam locomotives were overhauled in CP’s Ogden shops in Calgary until 1957, before the shift to diesel-electric power, according to the Class I railroad.

Late last fall, CP’s hydrogen fuel cell-powered freight locomotive (now under test) pulled the Empress at the shop. “A century ago, 2816 entered service moving people and goods across Canada,” CP wrote in a Nov. 16 LinkedIn post. “Today, CP teams are prepping 2816 for a special cross-continental voyage from Calgary to Mexico City to celebrate completion of the proposed CP-KCS [Kansas City Southern] merger, pending regulatory approval, and the connecting of a continent through the creation of CPKC [Canadian Pacific Kansas City].”

CP President and CEO Keith Creel, Railway Age’s Co-Railroader of the Year for 2022, first announced the special voyage in September 2021, during an interview with Editor-in-Chief William C. Vantuono.

NS on Dec. 1 announced the 15 customer and supplier recipients of its inaugural Thoroughbred Sustainability Partner Awards, which honor corporate programs in three categories: achieving “significant energy efficiency savings”; implementing “innovations that have significantly contributed to a more sustainable future”; and working to “promote stewardship of the environment.”

The Class I railroad on Jan. 17 hosted its Thoroughbred Sustainability Partner Awards gala, welcoming the winners at its Atlanta headquarters.

“We congratulate our customers, suppliers and channel partner winners on their impressive sustainability achievements,” NS Executive Vice President and Chief Transformation Officer Annie Adams said during the event. “Norfolk Southern is proud to collaborate with each of these outstanding companies.”

“This award highlights the strategic role our locomotive modernization program plays in helping rail customers reach their ambitious emissions-reduction and sustainability goals,” said Pascal Schweitzer, President, Global Freight Services for Wabtec. “Norfolk Southern continues to be an industry leader in modernizing their locomotive fleet and was Wabtec’s first mods’ customer. I am proud of the partnership we have built together.”

The NS event will also marked the first meeting of the railroad’s Partner Council, whose members are also the Thoroughbred Sustainability Partner Award winners. The Council is slated to meet quarterly “to share resources and best practices to collectively move sustainability goals forward across the Norfolk Southern network,” according to NS, which noted that a new group of winners will join the council following next year’s Thoroughbred Sustainability Partner Awards.