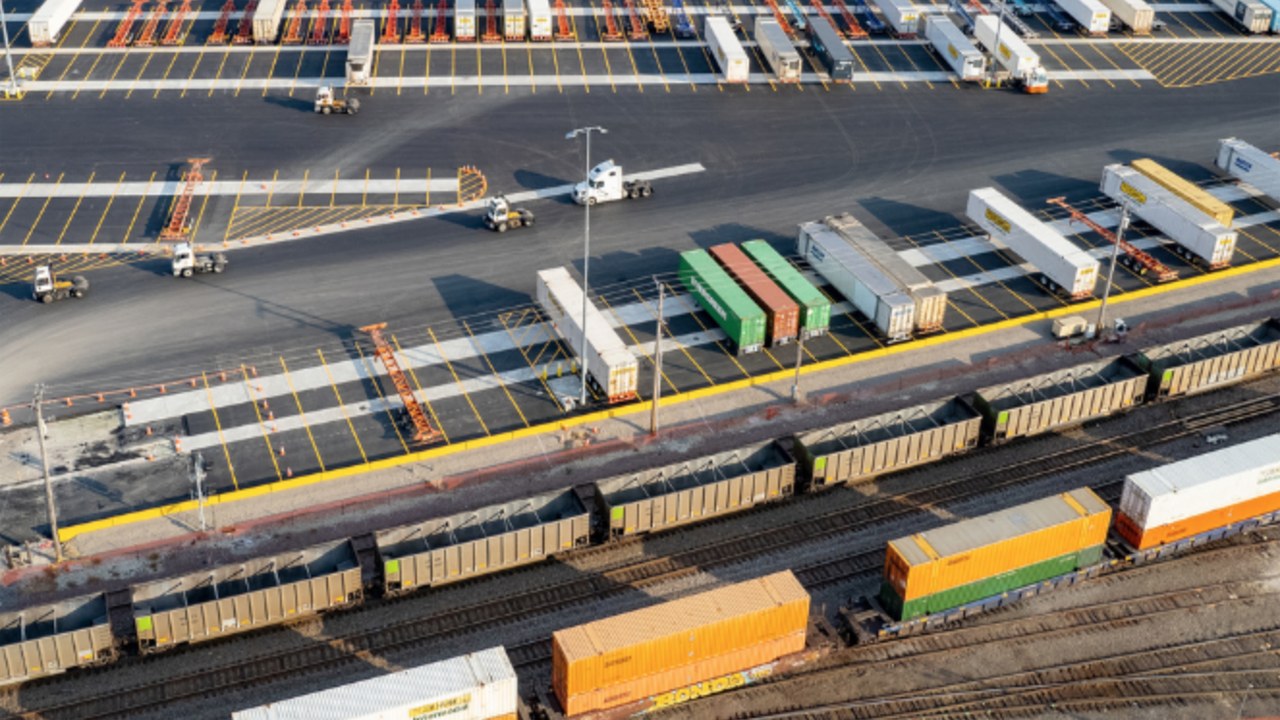 Of the $3.55 billion in BNSF’s 2022 capital expenditure plan, about $580 million went toward projects that support the growth of its Consumer, Agricultural and Industrial Products customers’ businesses. (Photograph Courtesy of BNSF)

Of the $3.55 billion in BNSF’s 2022 capital expenditure plan, about $580 million went toward several capacity- and efficiency-boosting projects and others that support the growth of its Consumer, Agricultural and Industrial Products customers’ businesses, the Class I railroad reported on Nov. 18.

For example, on BNSF’s Southern Transcon route between Southern California and the Midwest, the railroad said it is adding a new segment of triple track in California. In addition, it completed a multi-year bridge project near Sandpoint, Idaho, to improve network fluidity in the Pacific Northwest; wrapped up intermodal facility expansion projects in North Texas and Chicago; and in Southern California, completed initiatives to improve the efficiency of an intermodal facility.

“The timing of these projects coming online just as our peak shipping season gets into full swing will give us some additional capacity to get customers’ loads, especially holiday-related goods, where they need to be,” Executive Vice President and Chief Marketing Officer Steve Bobb said.

• Alliance Intermodal Facility, Texas: BNSF said its “fastest-growing” intermodal facility—located in an important connector between North Texas and California, the Midwest and Houston—was outgrowing its space. So over the past three years, the railroad has been working to add capacity. It has not only doubled parking spots, the last of which went into service earlier this year, but also added support tracks for locomotive storage and repairs.

Now, with 1,100 new parking stalls, BNSF has more room to load and unload trains and its trucking partners have faster access to units, according to the railroad, and having support tracks means work can be accomplished “to the side as opposed to taking up valuable on-track space.”

• Cicero Intermodal Facility, Illinois: Like Alliance, this facility needed more parking stalls, according to BNSF. About half were placed in service in October with the reminder slated to come on line this month. That means there will be 400 parking stalls just in time for peak shipping, BNSF said.

BNSF is also completing an in-yard overpass for trucks at the facility, as part of a multi-year yard-retrofitting project. The overpass will eliminate an existing main line grade crossing. Drivers will no longer have to cross three main line tracks in a yard that has as many as 145 trains per day, according to the railroad.

• Ash Fork siding, Arizona: BNSF has a 208-mile line off the Southern Transcon near Flagstaff at Ash Fork to Phoenix; it is used by about 12 trains daily. To ensure that trains headed to this line aren’t affecting Transcon traffic—that is on the way back to the Southern California ports or to the Midwest and points beyond—the railroad added a 16,000-foot siding at Ash Fork to hold trains and allow other trains to pass.

• Sandpoint Junction Connector bridge, Idaho: For the past few years, BNSF has been building the Sandpoint Junction Connector, a second railroad bridge over Lake Pend Oreille—Idaho’s largest lake—through Sandpoint, about 50 miles from the Canadian border. Expected to be in service by end of November, slightly ahead of schedule, it “will allow for more fluid rail traffic management through the Pacific Northwest corridor, and it will allow trains to continue to operate while BNSF performs regularly planned inspection and maintenance of the bridges,” according to the railroad.

Currently, an average of 60 trains per day move over the existing bridge. When both bridges are in full service, trains will be able to cross the lake in both directions simultaneously, according to BNSF, which noted that in addition to freight, the mile-long bridges serve the Amtrak Empire Builder route from Portland, Ore., and Seattle, Wash., to Chicago. (For more on the second bridge, read: “BNSF’s New Sandpoint Bridge Opens for Business.”)

• Third main track at Needles, Calif.: The BSNF Engineering group is adding 10 miles of new main line track near Needles, as part of a planned 30 miles of triple main line between West Needles and Goffs, Calif., in the Mojave Desert. “Originally the plan was to start the work in early January but getting 10 miles open before Thanksgiving will greatly enhance service on this portion of the Transcon,” BNSF reported. “It took a tremendous amount of coordination and effort, but our Engineering crews got it done!”

The 23rd edition of Canada’s Top 100 Employers has recognized CN and CP among the employers “with exceptional human resources programs and forward-thinking workplace policies,” reported employment periodical publisher Mediacorp Canada, which produces the annual list. Editors at Mediacorp grade employers on eight criteria: (1) physical workplace; (2) work atmosphere and social; (3) health, financial and family benefits; (4) vacation and time off; (5) employee communications; (6) performance management; (7) training and skills development; and (8) community involvement. Any employer with its head office or principal place of business in Canada may apply for the national competition, and private- or public-sector employers of any size are eligible, according to Mediacorp.

Among the reasons why Mediacorp selected CN:

Following are some of the reasons behind Mediacorp’s selection of CP:

Portland Community College (PCC) this month reported that the Union Pacific Mobile Welding Training and Trades Center is under construction at the Swan Island shipyard and due to be unveiled next spring. “Thanks to support from Union Pacific’s Regional Partnership Program, the mobile training center can be located in any PCC community to reach under-served populations and give them an opportunity to train for welding credentials and access other career and technical education programs at the college,” according to PCC, which on Nov. 10 hosted UP for a tour of the center.

“Many trades employ welding skills, and the employment prospects in Portland are strong as the Oregon Employment Department forecasts more than 250 welding job openings per year through 2027,” according to the college, which offers stackable certificates as well as associate degrees in welding at Swan Island and the Rock Creek Campus. “PCC’s welding faculty are dedicated teachers with real-world experience, helping students develop the hands-on skills employers seek. In addition, PCC’s welding classes offers flexible scheduling with an open-entry/open-exit, self-paced formats.”