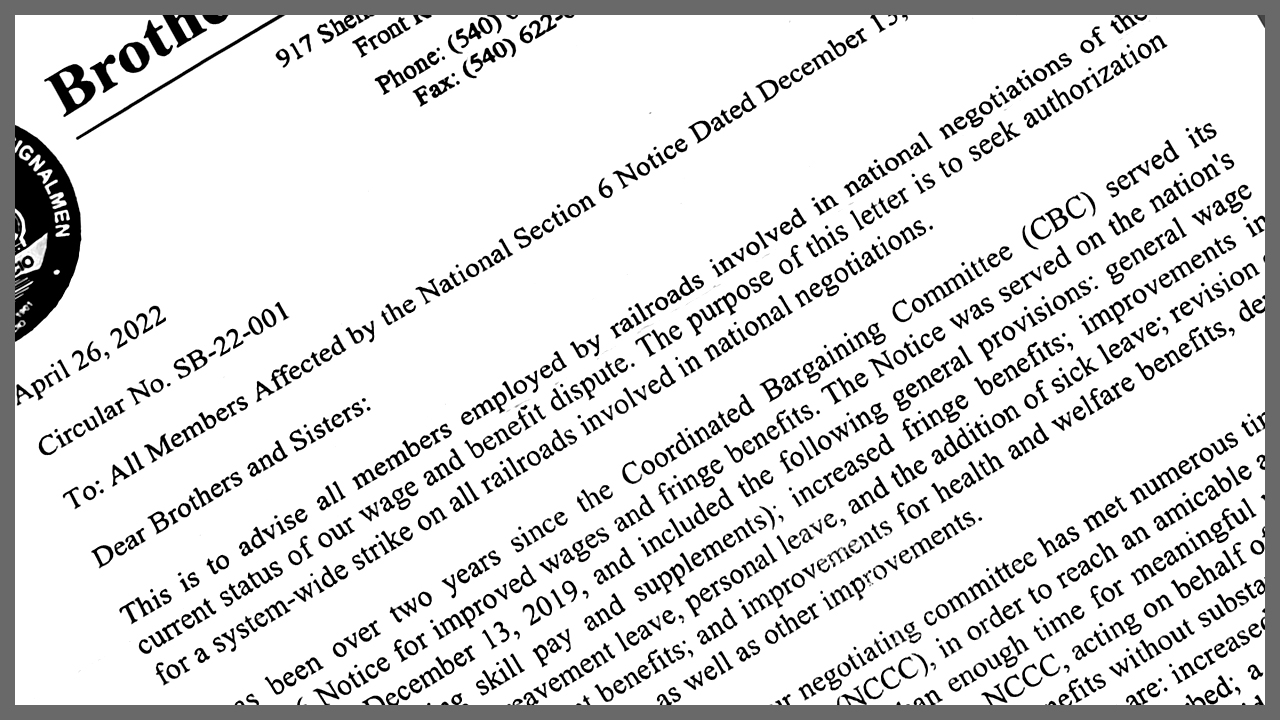 Railway Age on April 30 received an unsolicited copy of an April 26 letter from Brotherhood of Railroad Signalmen leadership mailed to the union’s general membership affected by the Dec. 13, 2019 Section 6 notice, advising them of a strike ballot. The source of the letter requested anonymity.

“The purpose of this letter (below) is to seek authorization for a system-wide strike on all railroads involved in national negotiations … We must send a loud, clear message to the railroads that we intend to secure a fair and equitable agreement that does not sacrifice our work rules for the decent standard of living that is rightfully ours,” the letter states. “The most effective and direct way for Signalmen to send that message is with an overwhelming vote to strike.”

The “loud, clear message” for which BRS leadership is calling is at best little more than saber-rattling, at worst illegal, according to Railway Age Capitol Hill Contributing Editor and former labor (UTU) official Frank N. Wilner.

“This is a political stunt on the part of BRS leadership, asking ‘member permission,’ explains Wilner. “The strike authorization does not mean a strike is imminent. Were BRS actually to strike during the pendency of National Mediation Board involvement in contract talks, it would be an illegal strike, subject not only to an immediate court injunction, but open BRS to financial damages that could shrink its treasury small enough to fit inside a single member’s lunch pail.

“That BRS—or any rail labor union—would even contemplate a work stoppage during a severe supply chain crisis and the need for military readiness in the face of unprovoked Russian military aggression and China’s ongoing Pacific Rim hegemony treads on an unpatriotic act. Even talk of a strike in the current environment would be an embarrassing slap in the face to the Democratic Party ahead of November elections, opening President Biden and congressional Democrats with labor leanings to effective attacks by Republican opponents.

“As the late Clinton J. Miller, a revered labor union attorney, often counseled hot-headed labor leaders, ‘Let me know how this turns out for you,’ the implication being, ‘Don’t call on me when it all goes totally south.’

“The National Mediation Board has made clear that there is no rationale at present to declare a bargaining impasse. In fact, the BRS, which is part of a 10-union bargaining coalition, only entered NMB guided mediation a few months ago.

“Surely BRS does not care to follow the Brotherhood of Maintenance of Way Employes down a previously trod destructive path. Not too many years ago, BMWE initiated so many unlawful strikes against BNSF that a frustrated federal court ordered the union to give two weeks’ notice in advance of any future intended work stoppage so as to give the railroad sufficient time to seek an injunction and courts time to consider the request so as to avert an economy-jolting illegal work stoppage.”