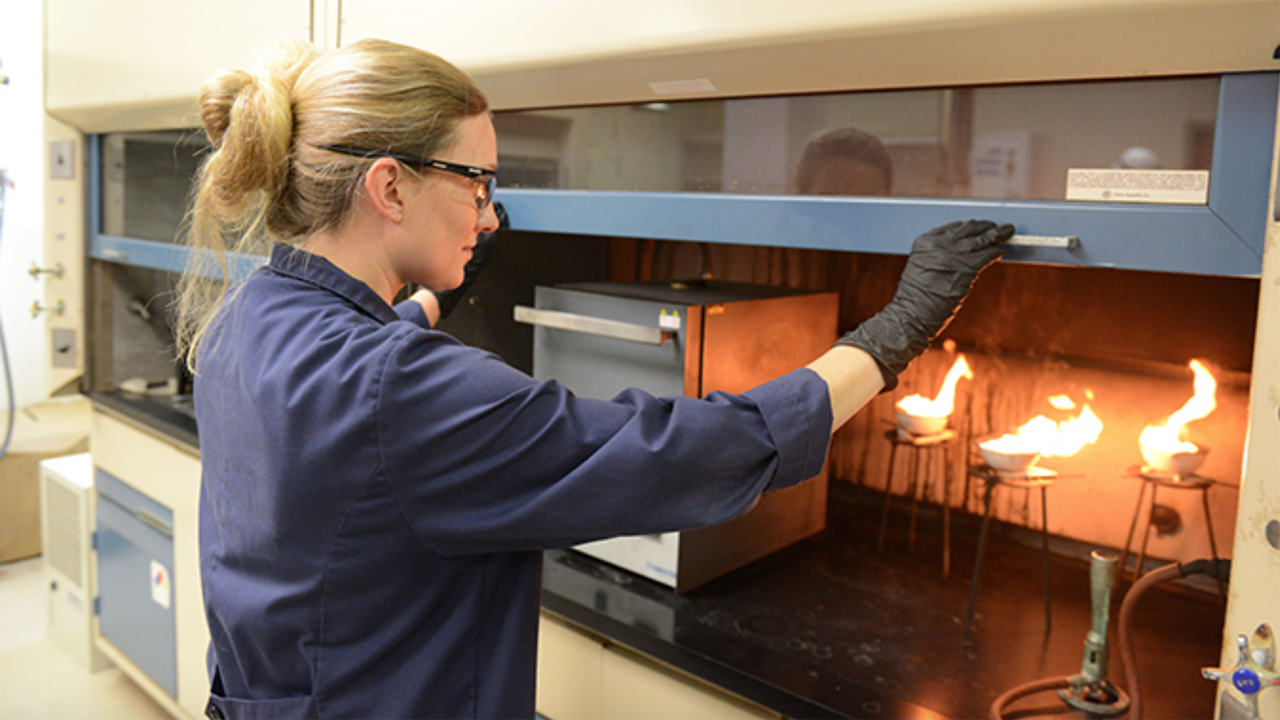 Senior Engineer I Rachel Flott analyzes diesel fuel to determine the ash content. The fuel is ignited to allow it to burn until only ash and carbon remain. (Photo and Caption: Courtesy of BNSF)

We all remember the beginning of COVID shutdowns and empty store shelves last year. Cleaning and disinfecting products were some of the hardest to find. Like most Americans, the team at BNSF had to change course quickly to secure an adequate supply of those elusive items.

Central to BNSF’s pivot was our Technical Research & Development (TR&D) group, which went from reviewing the safety and effectiveness of a few cleaning and disinfecting products each month to reviewing more than 500 in the span of three months.

“When cleaning and disinfecting supplies were running low everywhere, we had to quickly work with our Sourcing and Industrial Hygiene teams to come up with alternate viable solutions to keep our people safe,” TR&D Assistant Director Corey Ruch said. “At the beginning of the pandemic, we were reviewing new products non-stop to ensure they were safe and effective for employees.”

Testing the safety and efficacy of products is just one of the many hats worn by this group based in Topeka, Kans. The team’s main areas of focus include analysis and investigation of derailments and operational practices, new product approvals, and quality control, as well as testing of materials, fuels and chemicals.

The TR&D team’s work touches nearly every aspect of the railroad. For example, members of TR&D routinely test diesel fuel to make sure it is up to company standards. Soap for washing hands, which has become critically important during COVID, has to pass quality, environmental and industrial hygiene standards.

In addition, when unfortunate incidents such as derailments occur, members of the team are sometimes called to the scene or have components shipped to the lab to determine what went wrong and, if possible, how to prevent the incident from happening again.

The team is led by Manal Bishr, who started her career at BNSF as a summer intern in 2001 with the TR&D group. “I never imagined I would one day come back to lead this team of uniquely gifted problem-solvers,” Bishr said. “I worked at TR&D for five years before moving to various other corporate and field roles. It has been great to come back and be able to work with such talented people, many of whom helped shape my career.”

In a lot of ways, TR&D functions like BNSF’s very own Consumer Products Safety Commission. The team of 16 plays an important role in ensuring our railroad buys and uses the best materials available. They currently have more than 150 active projects working with many departments, including Engineering, Mechanical, Operations, Strategic Sourcing, Claims, Fuel Management and Industrial Hygiene.

“From locomotives and ties to cleaners, paints and chemicals, we’re involved in the decision-making process,” Ruch said.

TR&D Senior Engineer Darrell Krueger has the opportunity to work on many unique design projects and is part of the group that helped BNSF develop an industry-leading Track Health Optical Recognition innovation known as THOR. This optical track inspection technology uses sophisticated cameras that can detect and report rail defects while mounted on BNSF’s geometry cars moving at speeds up to 70 mph (see above).

“I really enjoy the fact that we get to roll up our sleeves and get hands-on with almost every aspect of railroading,” Krueger said. “That means connecting the dots with science and technology to help our field employees improve their safety and production. I like collaborating across departments and work groups and meeting people to solve problems for our business, together. There is incredible depth and breadth of all that we test in the lab and in the field.”

For Engineer II Alicia Lollar, working for a railroad never crossed her mind. Lollar has an anthropology degree from Kansas State University, and initially wanted to work in forensics for the Kansas Bureau of Investigation (KBI). After graduating, she worked at a local hardware store, waiting for her perfect job opportunity at the KBI, when a customer offered her a temporary role managing projects for BNSF’s TR&D group. That temporary role turned into a rewarding 22-year career where she tests components such as wheels and rails and puts together derailment investigation reports.

“It’s a little ironic how I probably do more actual investigating at BNSF than I ever would have at the KBI,” Lollar said. “No day is ever the same, and there is always something new to learn.”

The team is always evolving. With train simulation and computer modeling equipment, plus full chemistry, metallurgy and physical test labs at team members’ disposal, they are always open to taking on any challenge with an unbiased, fact-based approach.

TR&D Director Corey Pasta, who leads the team working on train simulations, operating practice rules and derailment analysis, said: “It is very satisfying to solve technical problems with my peers, knowing these solutions make an immediate impact in safely delivering goods to our customers.”

That impact is nothing new; historical records indicate there was a Santa Fe Railroad test lab in Topeka dating to the early 1900s. Through the years, the department expanded, with the addition of testing equipment, and in 1989, a new chemistry lab was opened adjacent to the physical test lab.

With nearly a dozen BNSF patents under their belt, ranging from technological advancements related to Liquefied Natural Gas to THOR, team members never stop learning and truly relish every minute.

“I enjoy having a finger on the pulse of the railroad and knowing many of the people and technologies that make this mode of transportation a vital artery in the health of the nation,” Pasta said.