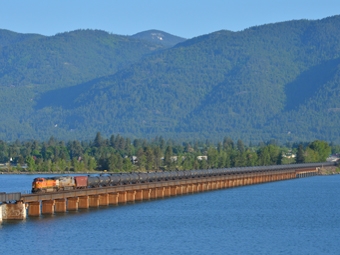 One of the more challenging capacity constraints affecting BNSF's Northern Corridor is the 4,769-foot long bridge across Lake Pend Oreille outside Sandpoint, Idaho, not far from where BNSF and Montana Rail Link (MRL) converge. BNSF is now looking into the bold concept of building a second bridge, nearly a mile long, adjacent to the existing one.

The bridge becomes a frequent choke point for BNSF and MRL because not only is it single-tracked, the surrounding area also has a 35 mph speed limit stretching several miles. During periods of heavy traffic, trains from all directions stack up as they wait their turn to cross the lake.

“We are in the preliminary engineering design phase,” BNSF spokesman Gus Melonas tells Railway Age. “We plan to construct a bridge 4800 feet or 3/4–mile long at some point in the future. The design would include concrete spans and steel pilings.”

Melonas adds that BNSF must obtain permits to build the bridge. That process could prove difficult, considering the opposition some Sandpoint residents, and others in the region, have aimed against BNSF’s growing oil and coal business. Disturbance of the lakebed and shoreline will likely attract oversight as well.

The current bridge over Lake Pend Oreille, completed in 1905 with steel decking on concrete piers, replaced a long wooden trestle which Northern Pacific Railroad had built as part of its original main line construction in the 1880s. In 2008, BNSF installed new steel piers and decking at the bridge’s west end, and more recently performed similar work on the bridge’s east end.

In constructing a second bridge, BNSF’s Melonas says, “Preliminary specs would include 50-foot track centers between the current bridge and the adjacent planned new structure. We would hope to complete it by 2018, however, that is speculative.”