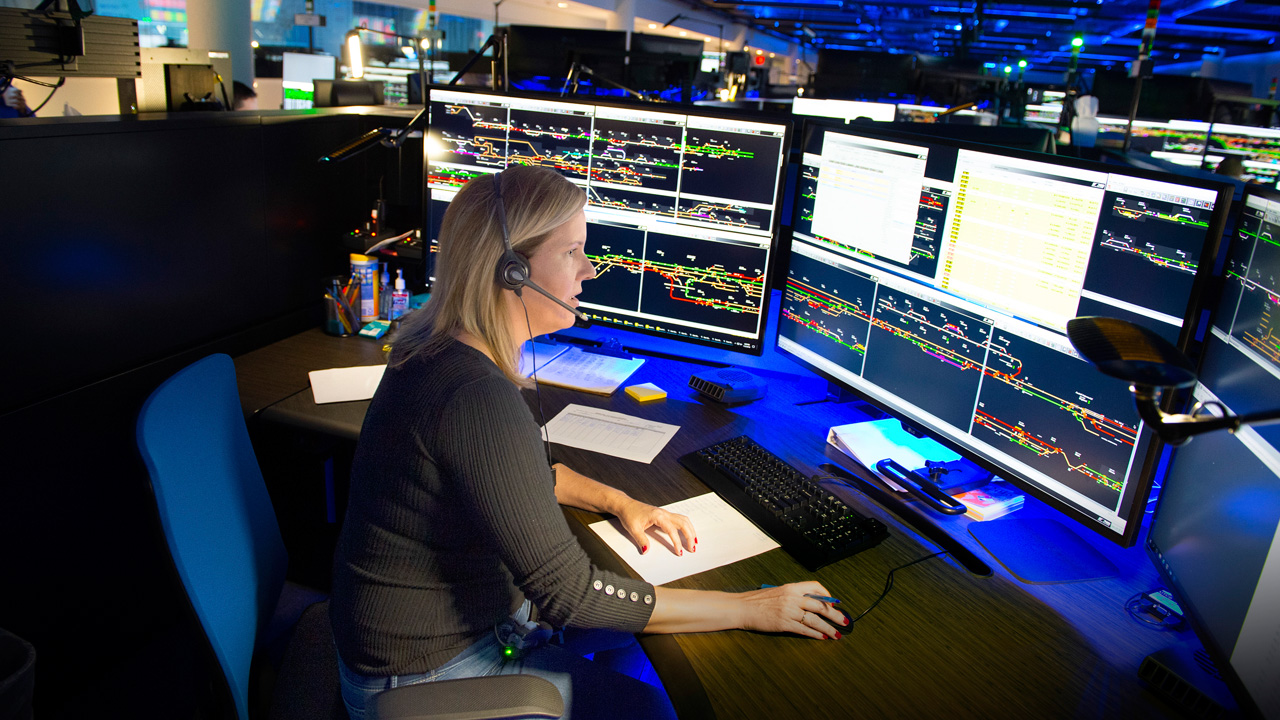 Nothing says fundamental transformation quite like Norfolk Southern’s new Network Operations Center, a murmuring, windowless bunker where the Class I has aggregated its dispatching in downtown Atlanta.

The NOC went live Oct. 26, and by late November, the longtime proponent of regional dispatching hubs expected to have all nine operating divisions on line.

The message is clear: The future is digital automation, driven by data analytics, applied to the broad scope of railroad operations from centralized control to signaling to locomotive fuel efficiency to crew calls.

The company’s data revolution was well under way before Norfolk Southern President and CEO Jim Squires in October announced plans to implement Precision Scheduled Railroading in 2019—the latest Class I to go the operational route loved by Wall Street and deployed by the late Hunter Harrison, most recently at eastern rival CSX.

In the darkened spaces of the NOC, dispatchers and supervisors in cubicle-like pods manage routes and communicate with train crews throughout the network via multiple screen displays. Larger screens are positioned around the room and display the condition of every active train on the network, refreshed every two minutes.

Centralized control isn’t new to railroading but NS, for years a proponent of regional dispatching, was designing from the ground up. Staff made visits to BNSF, CSX, CN, Canadian Pacific and Union Pacific to see how their Class I brethren made their own configurations. They ventured outside the tracks, to Home Depot among others, to examine analogous network practices. Talks with UPS, a major intermodal customer, are looking at real-time car visibility for customers.

But the NOC is just the most visible example of the company’s transformation, driven by Positive Train Control, the federally mandated—but not federally funded—safety system. 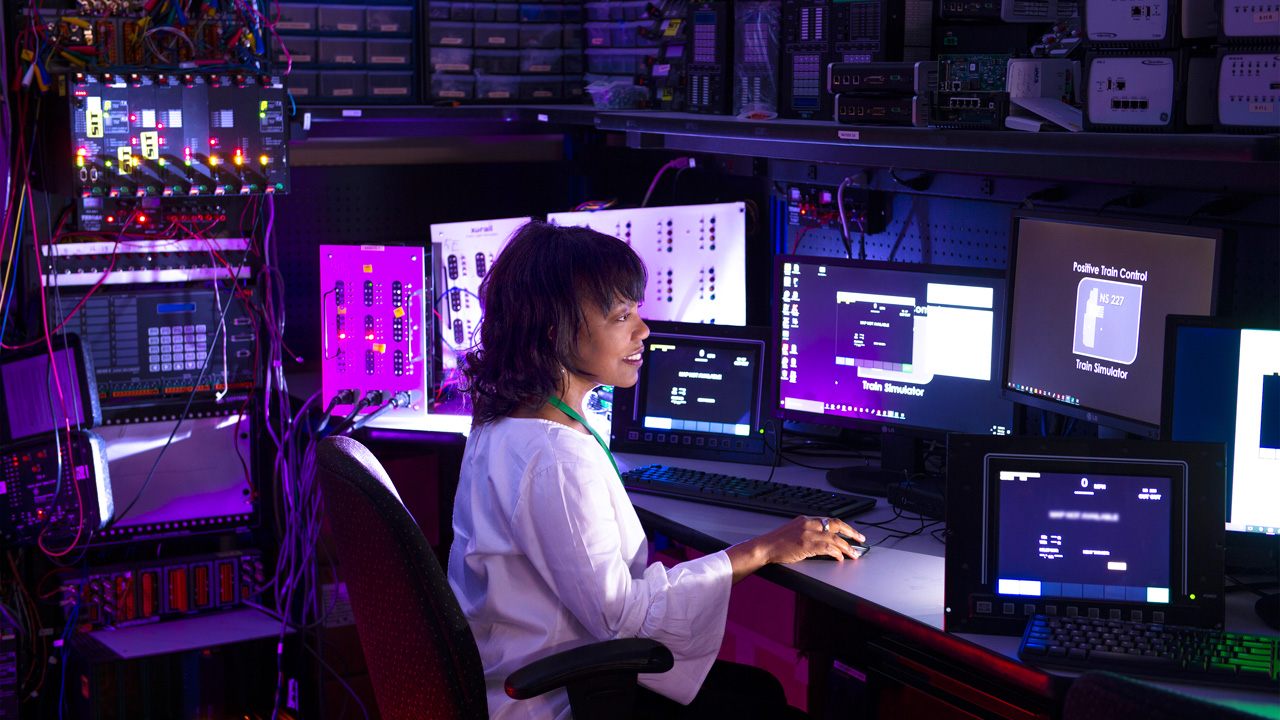 “What we are doing is leveraging the safety enhancements of PTC and the data generated by the Global Positioning System (GPS) for optimized operations,” says Warren Stubbs, Director of Information System Development. “We try to minimize human transactions. We want autonomous operations, not just autonomous trains.”

Norfolk Southern set its largest-ever capital spending for technology as part of its fiscal 2018 budget, says Stubbs, and tech is the fastest-growing employee segment.

The railroad has a four-point program for data analytics: Safety; Operating Efficiency; Customer Service, and Asset Utilization. That will mean, for example, using data to predict rail wear and schedule repairs before operations are disrupted; deploying machine learning to predict low coolant and battery problems in locomotives; monitoring the health of the thousands of wayside detectors, and, ultimately, moving much of that detection onboard trains.

“With 70,000 pieces of rail in the network, we want to specify the right rail [for replacement] at the right place, at the right time,” says Clark Cheng, Senior Director of Operations Research.

“In a network, any disruption is going to have a ripple effect, so the cost-benefit analysis makes analytics an attractive proposition,” says Djiby Faye, Manager Information Systems Development. “It’s all imputed into a plan. That way, we have a window for optimized supply and capacity planning, asset utilization and improved performance. Every day we see a clearer path to automation, it’s no longer theoretical. There’s a socialization aspect, of course, and the railroads are playing a leading role with that.” 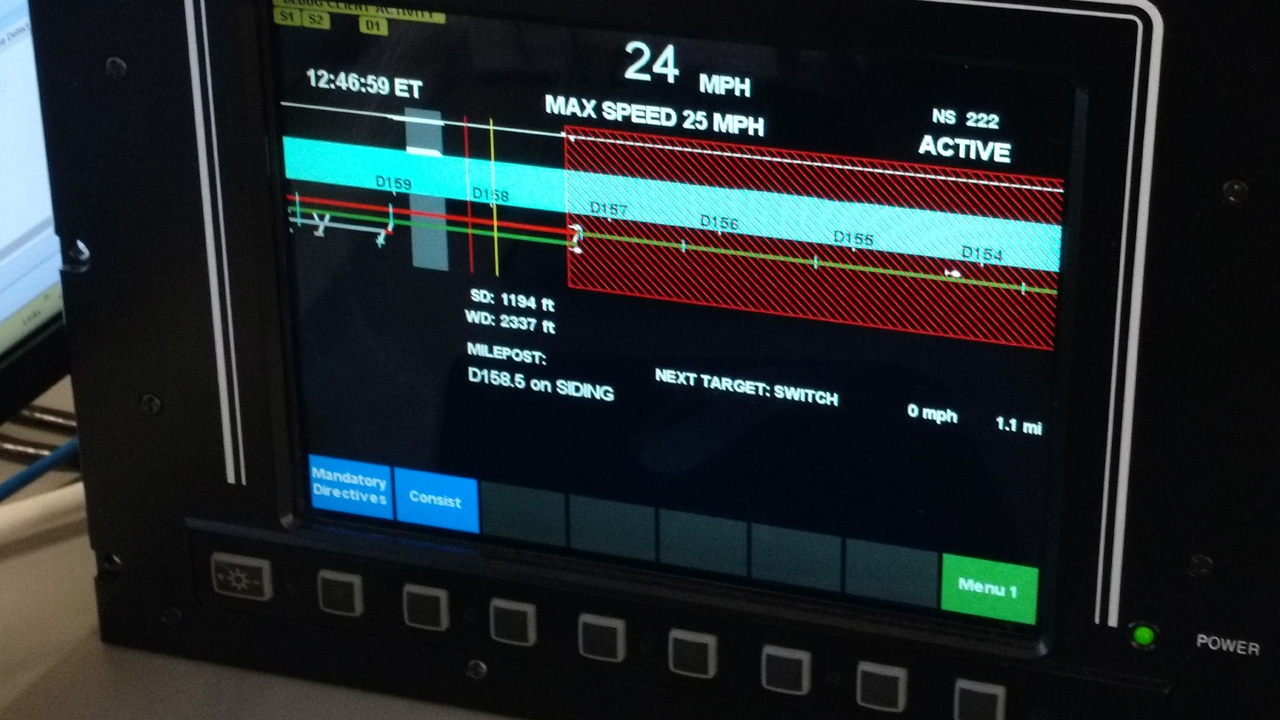 A PTC safety alert, or “red fence”, is displayed on an in-cab PTC screen at Norfolk Southern’s testing lab in Atlanta.

Movement Planner is now deployed on 60% of the NS network, and the railroad in the coming months is rolling out PTC and GPS location information. (About 40% of the network, mostly former Southern Railway lines, is unsignaled dark territory where local dispatchers issue track warrants. PTC provides a safety “umbrella” where the railroad still maintains some remote dispatching with track warrants on these lower-density lines. NS has also filed for a two-year extension on fully implementing PTC to meet federal requirements.)

All train schedules get fed into Movement Planner, which combines planned and existing trains to create a master operations plan. “Business rules are used to produce a series of solutions,” says Stubbs, “taking into account crews, train priority, dwell time and train type, to create the operational plan.”

A total of 2,700 NS locomotives are now equipped with computers with precise GPS data mapped to an onboard track database, Stubbs says. This information is communicated to the back office and Movement Planner, for a near-real-time view and optimization of a train’s run, for better meets and passes – and a more fluid network.

“Movement Planner says we are all going to be on the same operational page, not just what’s best for the Chicago-New York run, where 15-20 dispatchers are in their silos,” says Turnipseed.

Movement Planner’s Train Performance Calculator codifies data and algorithms account for grades, curves, restrictions, horsepower to tonnage, topography, crew on duty times, consist, and length of trains. Crew calls are targeted for automation, and MP’s two-minute cycles adjust plans for trains in a given area, to account for changes in a train’s estimated time of arrival and produce a projected run time.

“PTC has unleashed a torrent of information about operations and assets; that allows us to revise our timetable and recommended speeds, to run faster,” says Stubbs. “We have already started to raise speeds a little on PTC-deployed track, adding capacity with fewer locomotives and fewer crews. That’s better crew availability and asset utilization.”

Another GE product, Yard Planner, is currently in testing at NS terminals, and there’s an array of in-locomotive technology looking for analytical and predictive items, including energy management systems Trip Optimizer from GE and LEADER (Locomotive Engineer Assist/Display & Event Recorder) from New York Air Brake. An ongoing “day in the life” program is testing thousands of theoretical train scenarios, and the company recently observed a demonstration of Trip Optimizer by GE at the Transportation Technology Center, Inc. (TTCI), a subsidiary of the Association of American Railroads. “It was part of intelligence gathering in a process we see leading to one-person road crews,” says Dan Plonk, Director of Transportation Application Planning.

“With PTC integration, you can take everyone off the train. The development phase will take three to four years, including the sensor package and machine vision, and it will be 10 years to full integration” —until, he adds, public sentiment is firmly on the side of autonomous vehicle technology. “The last 10% of event-solving,” he admits, “is going to be a bear.”

Says Cheng, “We want to be a tech company that runs trains, using technology to solve problems in a traditional industry.”