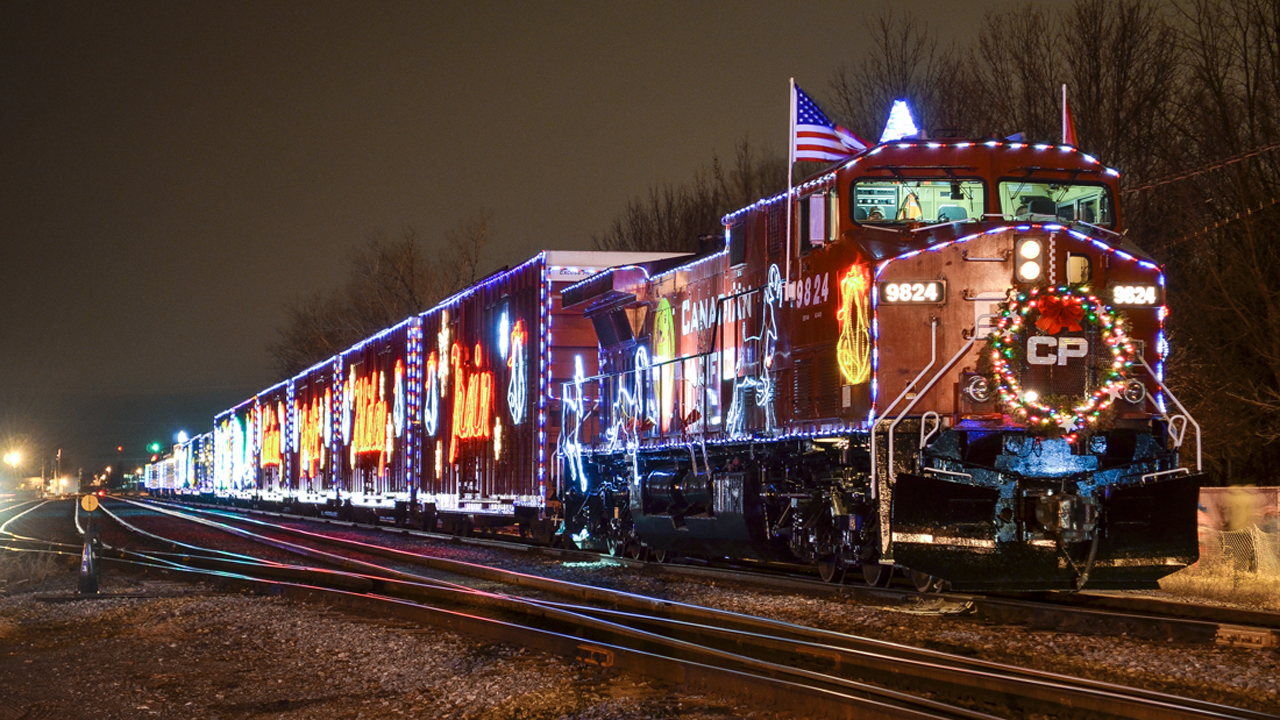 For the 20th consecutive year, Canadian Pacific’s two Holiday Trains will soon set out across North America, collecting food and raising funds for food banks while entertaining hundreds of thousands of people along the railroad’s network.

CP’s Holiday Train program, launched in 1999, has raised more than C$14.5 million and gathered 4.3 million pounds of food for communities along CP’s network in Canada and the U.S. Beginning in Montreal on Nov. 25 and 27 respectively, two trains will make the journey, traveling through 164 communities along CP’s network. Each event is free, with CP encouraging attendees “to open their cupboards and wallets to help address hunger needs in their communities. Local food banks will be accepting donations at each stop to ensure those less fortunate have enough healthy food this holiday season.”

“On behalf of the 13,000-strong family here at CP, it is my great pleasure to kick-off the 20th tour of the CP Holiday Train,” said CP President and CEO Keith Creel. “It is a privilege for CP to be able to run a program like this and connect with so many communities across our network. I want to personally thank each individual who has made a donation over the past 20 years. Your collective efforts have made the Holiday Train a huge success for two decades.”

CP said it is also encouraging fans of the train “to donate heart-healthy food, as everyone should have access to healthy, nutritious food, regardless of circumstances. This supports the mission of CP Has Heart, a program dedicated to improving the heart health of men, women and children in North America. To date, this program has raised over C$15 million for cardiac care and research.”

“We are delighted to see the CP Holiday Train travelling across the country again supporting food banks for the twentieth year in a row,” said Food Banks Canada CEO Chris Hatch. “The role that CP plays goes beyond collecting food and raising funds, as it also helps Food Banks Canada transport food across the country through our National Food Sharing System. For that we are truly grateful.”

The U.S.-bound train will depart from Montreal on Nov. 25 and head south. Sam Roberts Band and JoJo Mason entertain crowds at stops in Quebec, New York and Ontario. The Trews will then hop on board with Willy Porter in Chicago to complete the trip through Illinois, Iowa, Missouri, Wisconsin, Minnesota and North Dakota before arriving at their final destination in Weyburn, Sask. on Dec. 16.

The Canadian Train will depart Montreal two days later on Nov. 27. Kelly Prescott will join three time Juno award-winner Terri Clark and Sierra Noble in Ontario, Manitoba and Saskatchewan to Calgary and Edmonton, Alta. Sam Roberts Band will then carry on through Alberta and British Columbia, joined by Kelly Prescott and Tracey Brown, to the final show of the 2018 CP Holiday Train tour in Port Coquitlam on Dec. 18.

To coincide with the 20th anniversary of the Holiday Train, CP will release 20 festive songs by artists that have toured on the train over the past 20 years. For 20 days beginning Nov. 25, fans can visit the CP Holiday Train playlist on Spotify for a free song to stream. Users with premium Spotify accounts can download songs onto their smartphone. The playlist includes hits by past artists such as Alan Doyle, Wide Mouth Mason, Terri Clark, Jim Cuddy ands Odds.

Holiday Train visitors can take photos and enter CP’s Capture the Spirit photo contest. Participants can win a trip aboard the 2019 CP Holiday Train and a $1,000 donation to their local food bank. Further details about the contest will be available closer to the start of the program on the CP Holiday Train Facebook page at facebook.com/HolidayTrain.

“To help make this year the best yet for local food banks and food shelves, the Holiday Train asks fans to follow the train on social media, invite their friends and family and spread the message about the importance of heart-healthy donations by using #HealthyDonations,” CP said. “Supporters can follow the CP Holiday Train on Facebook, Twitter and Instagram @CPHolidayTrain. Use #CPHolidayTrain as you track the progress of the train across North America.”