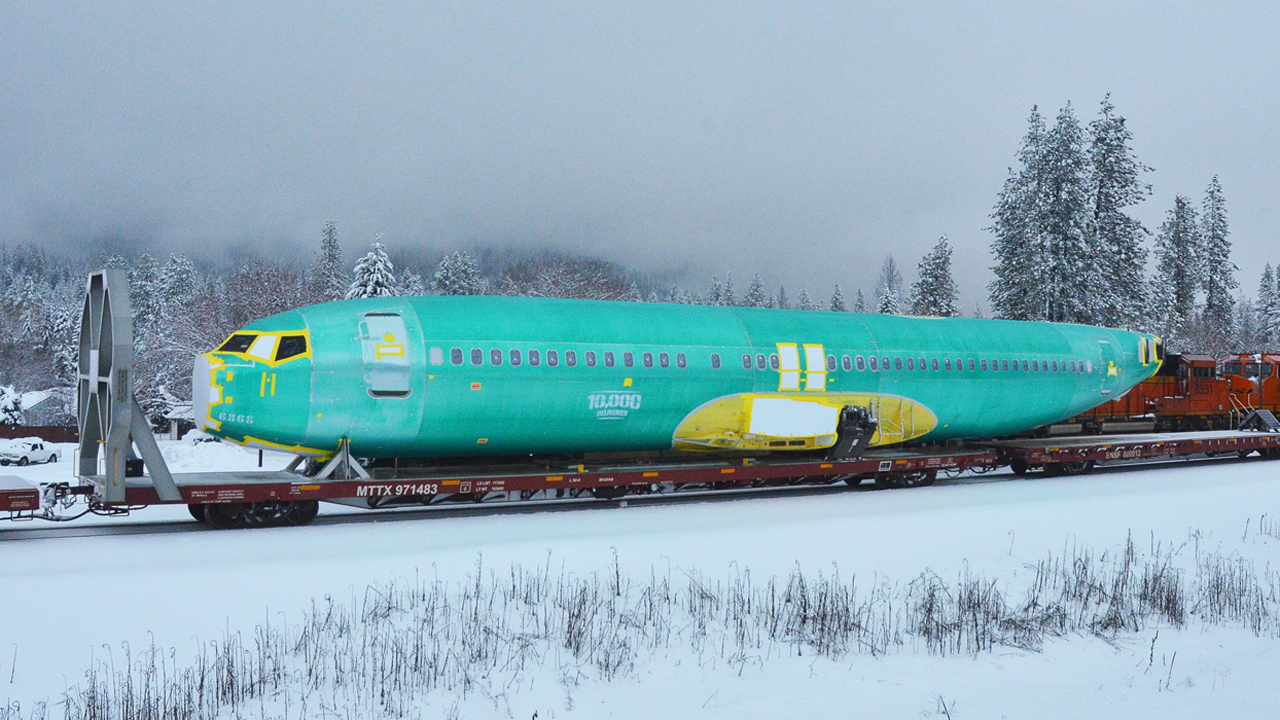 An aviation milestone has been achieved thanks to a half-century of railroad transport. Spirit AeroSystems announced on Feb. 14 that the 10,000th 737 fuselage had left its factory in Wichita, Kans., and was en route by rail to Boeing’s massive assembly plant in Renton, Wash.

With the commemorative phrase “10,000 Deliveries” on its side and tail, the fuselage was among two that headed west from Wichita on BNSF, eventually being added to the head end of train Q-ALTPTL, an Alliance, Tex., to Portland, Ore., intermodal. The usual Boeing body routing via BNSF-Montana Rail Link-BNSF delivered the historic load to the Seattle area on Feb. 18.

Rail shipment of fuselages, wing assemblies and other commercial aircraft components from source plants in Kansas and Texas to Boeing assembly plants in Renton and Everett, Wash., began in the 1960s. Boeing models from the 707 up to the 777 have had parts shipped by rail, but it’s the 737 that has become the most prominent feature of this unique service. Complete 737 fuselages travel on flatcars, while partial fuselages for larger aircraft, wing sections and other oversized parts are shipped inside custom-built enclosed cars.

BNSF and Boeing commemorated the delivery of the 5,000th 737 fuselage to Renton back in January 2006. At that time, BNSF said it was shipping 28 fuselages every month. By 2013, shipments had reached 35 or more per month, made possible by the addition of 14 more railcars to the specialized BNSF/Boeing fleet.

Spirit AeroSystems acquired Boeing’s commercial aviation plant in Wichita in 2005. Boeing says the 737 has been its most successful commercial aircraft. With more than 4,600 currently on order, Boeing says it will increase production of its 737 to an astonishing 52 per month in 2018, and as many as 57 per month in 2019. That will keep BNSF and MRL busy moving wing-less aircraft toward the Pacific Northwest.