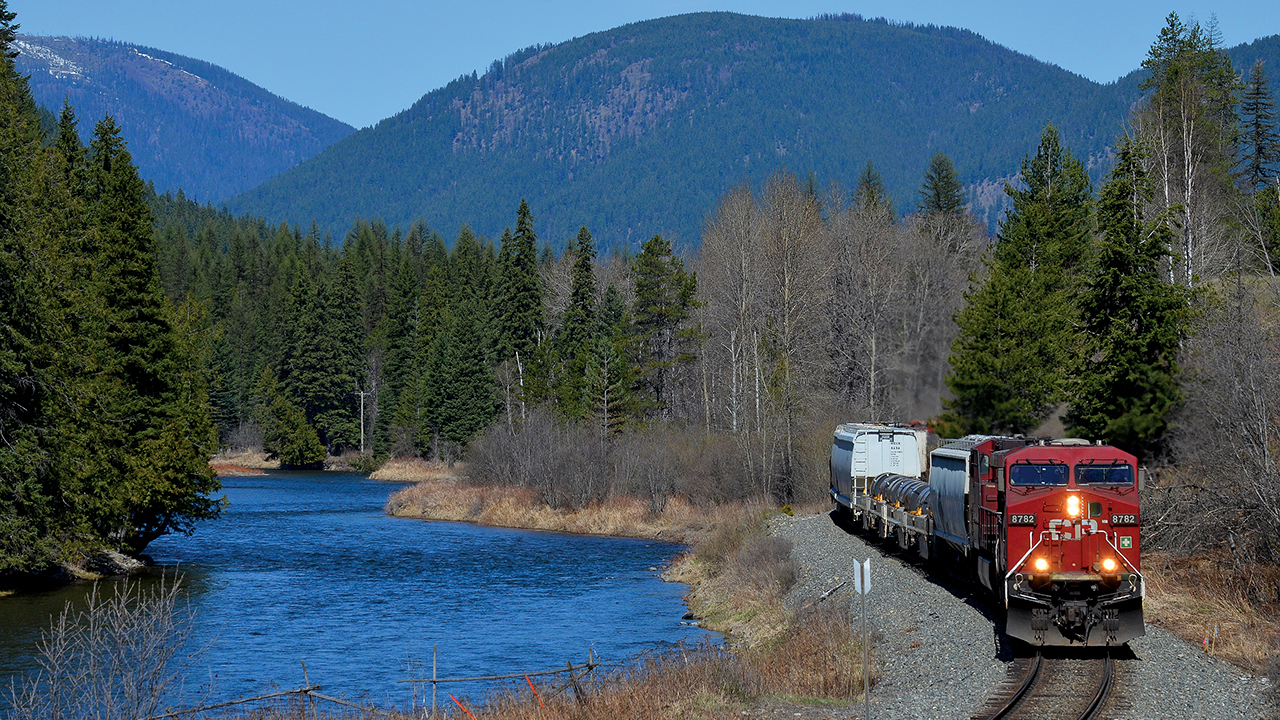 This hypothetical transaction would involve UP’s 138-mile Spokane Subdivision from the U.S./Canada border station of Eastport, Idaho, to a connection with BNSF Railway just south of UP’s SI Yard in Spokane, Wash., and possibly UP’s 170-mile Ayer Subdivision between Fish Lake, Wash., and Hinkle, Ore. To link the Spokane and Ayer Subs, UP’s 14 miles of trackage rights over BNSF between Spokane and Fish Lake (in effect since the consolidation of Spokane area rail lines in the early 1970s) would be transferred to CP.

Considering CP’s current financial strength, its desire for growth, and UP’s expressed willingness to sell or lease properties including its main line via Tennessee Pass in Colorado and its branch line to Silver Bow, Mont., it might be difficult for Omaha to ignore a reasonable cash offer for segments of its Northwest territory. Could CP also bargain its way from Hinkle west, all the way to Portland?

One look at CP’s system traffic density map reveals why a deeper presence in the American Northwest seems almost inevitable. CP has direct access to multiple seaports and population centers in the eastern U.S. and Canada. Its Soo Line network taps America’s industrial and agricultural heartland. And a vast web of CP secondary mains and branches crisscrosses Canada’s grain-growing and crude-pumping provinces. But despite its recent purchase of U.S. entry points via the Detroit River Tunnel and the Central Maine & Quebec Railway, CP moves the majority of its revenue tonnage (grain, coal, potash) west toward Pacific export, on the same corridor where intermodal trains (nearly one-quarter of CP’s revenue) convey imported merchandise eastward and domestic shipments both ways. UP, BNSF, and CN each serve multiple port districts along the Pacific Coast, while CP has direct access to only one: Vancouver, B.C.

To meet the needs of Canadian export customers, CP has spent decades handing off some of its business at the northern borders of Washington and Montana (to BNSF) and Idaho (to UP). BNSF and UP deliver CP unit trains carrying grain or oil to export or processing terminals in Washington, Oregon and California, and loose carloads of Canadian lumber, propane, fertilizers and other goods throughout the western U.S.

Of those western U.S. connections, none had deeper ties to Canada, or to CP, than the Spokane International Railway. Completed between Spokane and Eastport in 1906 (with partial funding through bond purchases by CP and its U.S. subsidiary Soo Line), the SI became part of a joint Soo-CP-SI-UP corridor that crossed the international boundary twice while providing through passenger service between Minneapolis and Portland in its early years. It later developed into a competitive route for grain and legumes from the American Midwest to the Pacific Northwest that still functions to this day. In fact, it’s been carrying much of the record-setting surge in exports of U.S. soybeans to China that began in mid-2020. CP bought a controlling interest in the SI in 1916, but it was ultimately UP that acquired the SI as a subsidiary in 1958 and fully integrated it in 1987.

An increase in Canadian potash exports more than two decades ago was a key factor in CP and UP forming an alliance called the Pacific Can-Am Corridor, which marketed the Eastport, Idaho, gateway as an international trade route ready for expansion. Some potash found its way to an export dock in Longview, Wash., but after Canpotex opened a new terminal on the Willamette River outside Portland in 1997, close to one-third of Canada’s potash traffic began heading there. In the years that followed, new manifest and grain business helped to nearly quadruple the Can-Am Corridor’s daily train count.

Gaining UP’s trackage as far south as Spokane or Hinkle would not get CP all the way to the American West Coast, but it would help relieve a significant bottleneck in the Can-Am Corridor’s traffic flow. Mountain slopes and the Moyie River leave very limited holding space for trains on CP’s side of the border at Kingsgate, B.C., and likewise for UP at Eastport. Problems ranging from crew availability to mechanical malfunctions have occasionally delayed the hand-off of trains between the two railroads, plugging the border crossing for hours. In 2019, UP added a new siding at Snyder Creek, ten miles below the border, to take some of the pressure off Eastport.

If CP were to qualify crews (including any hired from UP) to cover most or all of the roughly 200 miles from Cranbrook or Fort Steele, B.C., to Spokane, trains would pause at the border just long enough to clear security and customs inspection. In fact, short of CP actually taking charge of any UP trackage, an agreement on run-through crews alone would be highly beneficial to the Can-Am Corridor.

It would remain to be seen whether CP would reopen the automated classification hump yard at Hinkle, which was closed in 2019 as part of UP’s implementation of Precision Scheduled Railroading. UP shifted most of the sorting and routing for its Northwest carload business away from Hinkle and into several smaller yards throughout the region. At Spokane, this has required manifests traveling to and from Canada to be divided into three or more pieces in order to squeeze into UP’s 3,000-foot-long former Milwaukee Road yard, leaving minimal track space to perform switching and forcing other manifests and locals to wait miles away until the yard is able to receive them. In October 2020, conventional flat switching of UP’s Canadian manifests at Hinkle was tested, but that work was quickly shifted back to Spokane.

A quarter century ago, CP may have missed an opportunity to assemble a route clear to western Washington’s Puget Sound. Had it bought UP’s former SI between Eastport and Spokane, CP could have rebuilt and connected segments of former Spokane, Portland & Seattle; Northern Pacific; or Milwaukee Road lines to reach the foot of the Cascade Range at Easton, Wash. From there, all CP had to do was cross one of two dormant railway passes: Snoqualmie (MILW) or Stampede (NP). Instead, it was BNSF who reopened Stampede Pass in 1996, and those SP&S and MILW grades became public trails.

If CP took greater command of the Can-Am Corridor, some things would appear virtually unchanged. For more than 30 years, run-through CP locomotives have been prevalent south of Eastport, while UP power has routinely wandered north into Canada. However, the length of certain unit trains and manifests is already growing. Since 2019, many of the potash trains passing Eastport have stretched to more than 180 cars, with additional locomotives positioned as Distributed Power Units (DPUs) at the middle and rear of the train. If Canpotex were to upgrade its Portland terminal to process a greater number of these mega-sized trains, it would add to the pressure that might one day push CP south of the border, then west.