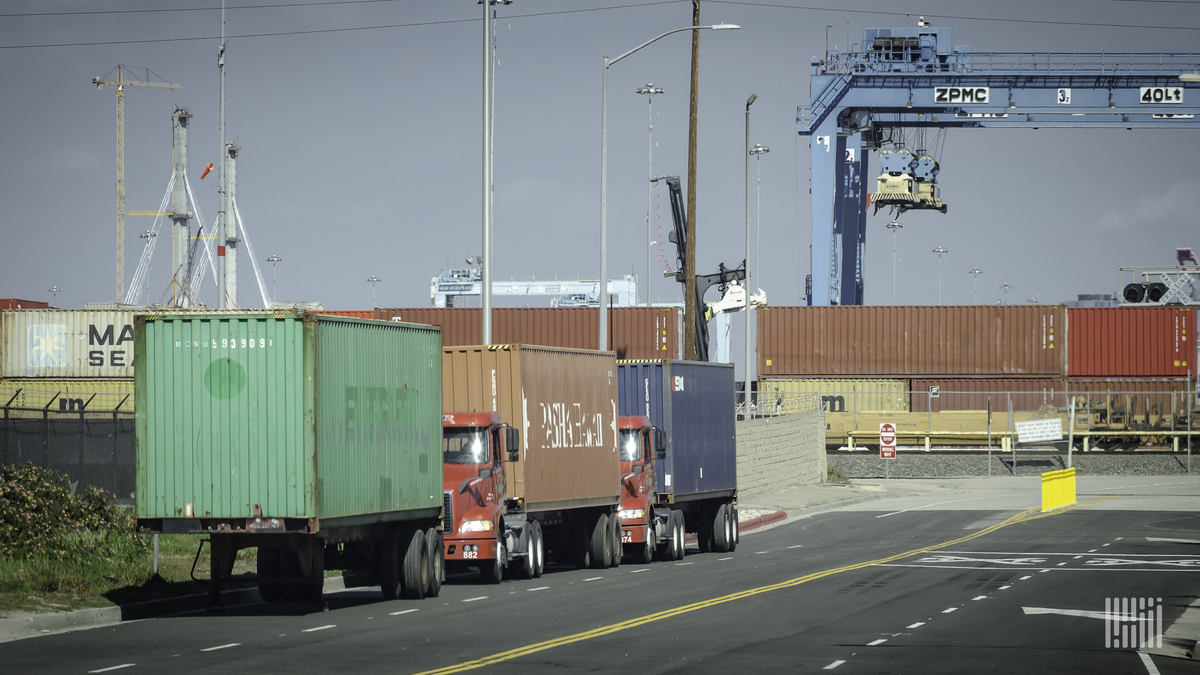 Throughout last year and year-to-date, the Class I railroads and the truckload-based intermodal companies have highlighted the soft truckload market as one of the major reasons for a lack of intermodal volume growth. The depth of the truckload weakness and how it may be changing can be illustrated from data provided by the FreightWaves SONAR software platform.

The above chart, the FreightWaves SONAR Outbound Tender Volume Index (OTVI), is used to gauge truckload demand, presented as an index of electronically tendered volumes on a given day. A tender is a load offer from a shipper to a trucking company that is sent electronically.

At the peak in mid-March, shippers were requesting that trucking companies handle nearly 30% more loads than at the same time a year earlier. Those requests were placed by grocers, big box retailers and consumer products companies, all racing to restock shelves that had been cleared out by panic buyers preparing to shelter in place.

After that short and intense period of truckload demand, there was a major lull, with shippers requesting trucks with 10% less frequency than in the year-ago period as businesses were shut down and consumers started living off their existing food stockpiles. Since early to mid-April, demand has improved modestly from its low as some businesses have started to cautiously reopen and consumers have finally ventured out to replenish a portion of their initial hordes.

But, shippers are still requesting 6% fewer truckloads than they were one year ago, and a 6% y/y decline is a major one considering that truck demand in the past week is roughly the equivalent of the week of Labor Day, a week with four business days. The COVID-related demand decline further loosened truck capacity following last year, which was a dismal one for the trucking industry.

Going forward, truckload demand is rising from a low level, with most U.S. states, rightly or wrongly, moving forward on measures to relax stay-at-home restrictions, combined with the ramping up of the produce season. Unfortunately for freight volumes, many of the businesses reopening are service-based and do not move much freight.

This spring, FreightWaves’ Outbound Tender Rejection Index has been on a nauseating roller-coaster ride, in a manner not seen since the inception of the index three years ago. There was a major surge of spot market activity during the scramble to restock shelves in March, with outbound tender rejections reaching a peak of 19.25% on March 28. The tender rejection percentage for the last week stands at 2.85%, among the lowest values in the series’ three-year history and only 30 basis points above the low during the last week of April, which will likely, and hopefully, prove to be the bottom. During previous periods of weakness, the index has found a support level around 4%, getting close to that level, but rarely falling below. This is the longest time OTRI has been under that historical support line, and with volumes at national holiday levels, there is not much pointing toward a substantial rebound.

No upside, all downside: Intermodal never participated in the COVID-related March surge but is negatively impacted by the looseness in trucking.

While longer-term structural questions remain regarding whether intermodal is still a growth area within transportation, it appears that the March surge in transportation demand was for freight that was too service-sensitive, for freight that too often needed to be refrigerated, in lanes that too often were not truck-compatible and in a market with truck capacity that was too loose to make much of a dent in intermodal volume.

The result has been an exacerbation of excess truckload capacity, on top of an already weak truckload market that has carriers showing a willingness to accept loads in lanes that would typically be best suited for intermodal, such as LA to Dallas, with truckload rates falling below intermodal rates.