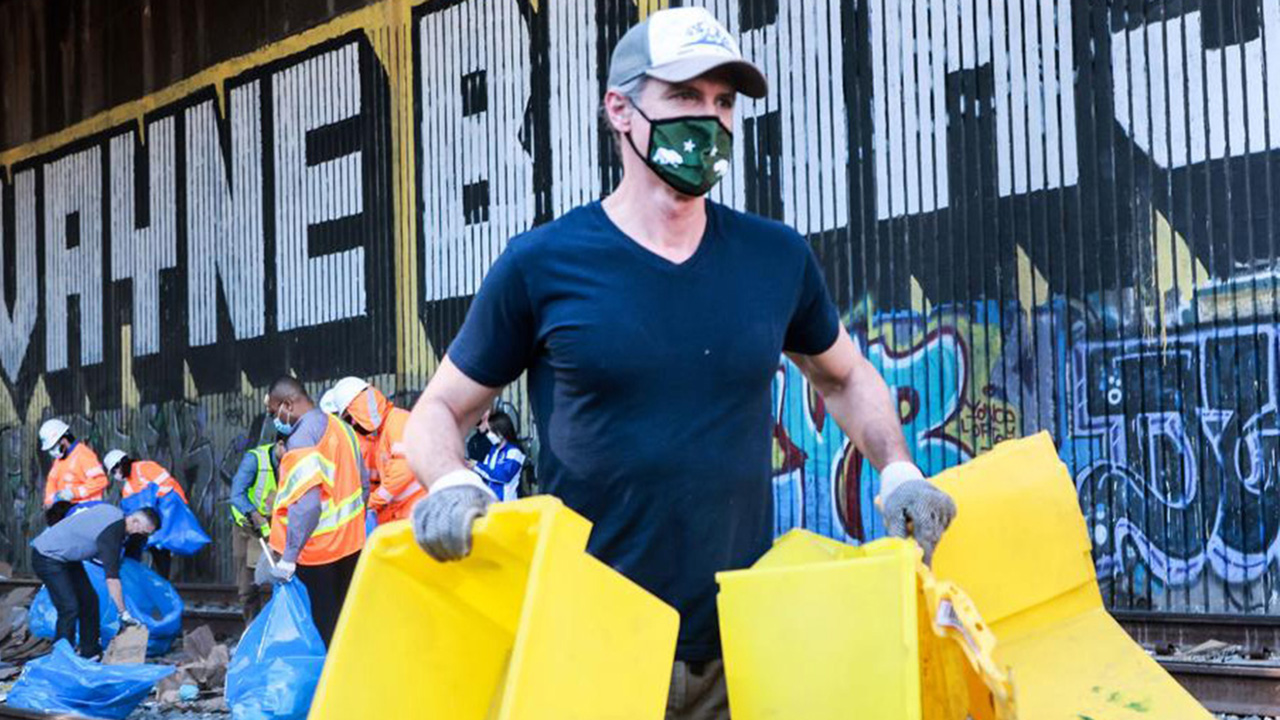 One report stating that Union Pacific had decreased railroad police in the L.A. theft target area has gone viral. It was made worse by California Governor Gavin Newsom, in a blatant photo op, walking the crime scene as if he is surveying the damage to a suburban community following a state of emergency.

FINANCIAL EDGE, RAILWAY AGE FEBRUARY 2022 ISSUE: Sometimes the news cycle creates so many opportunities that a monthly column feels like it needs conversion to a blog. A couple of recent events emphasize how North American rail is perceived and often victimized in politics and the media.

In November 2021, PHMSA (Pipeline and Hazardous Materials Safety Administration) suspended a 2020 rule championed by then-Administrator Howard “Skip” Elliott—who like his counterpart at the Federal Railroad Administration, Ron Batory, is an experienced railroader—authorizing the transportation of liquified natural gas (LNG) by rail. As covered in Railway Age, the announcement by PHMSA touches the cultural hot points. PHMSA is worried about safety, greenhouses gases, and of course its reputation. The announcement was followed by a 15-state attorneys general filing in support of the PHMSA announcement.

Occasional accusations to the contrary, Financial Edge always comes down on the side of safety first in North American rail. Consistently, however, railroads in North America are held to a different standard and made to be liable to different rules than other industries performing the same activities. As RSI noted in its response to PHMSA, the tank car specifically for carrying LNG, the DOT-113C, was called out in 2020 by PHMSA for its safe history of operation: “The final rule authorizes the transportation of LNG by rail in DOT-113 tank cars, which have an established track record of safety in transporting other cryogenic flammable materials.”

So PHMSA buckles to political winds and partisanship rules over good sense and good commerce, how unfortunate! It is no secret that a tightening environmental agenda is being implemented by the Biden Administration. This isn’t just a matter of policy. Why? Just look at what has been happening in LNG while PHMSA fiddles with North American rail. LNG continues to move by truck and barge, regulated for sure, but certainly without the scrutiny being levied at rail when movement of LNG is considered.

The railroad lobby needs the strength and willingness to fight these fights when the chip stack favors trucking over rail. This might be a case where the shipper lobby and the railroad lobby (not always bosom buddies) need to work together to put pressure on the state attorneys general making the case against moving LPG by rail.

The Wall Street Journal joins the clickbait “train”: Recent thefts in Los Angeles on the Union Pacific have made national news. It’s easy to see why. The detritus from the thieves breaking into intermodal containers looks like a post-tornado landscape: packing materials strewn everywhere and heart-string-pulling photos of family memorabilia scattered on the railbed.

In its coverage of the story, The Wall Street Journal went as far as to find names and addresses on the packages and to call the package recipients to ask them if they were aware that their package was involved in a heist. Dare we say: how Geraldo of them.

The tally for the recent (up to a full year’s worth) theft on the UP lines: $5.1 million. That is for sure a great deal of money, but it also pales in comparison to the estimated 210 million (yes, million) packages that disappeared off the porches and doorsteps of American homes in 2021. By some estimates, the total value of that merchandise is greater than $5 billion—far more significant than UP’s current problem. However, that damage lacks a clear villain, the mantle of which has been thrust onto UP’s shoulders.

It’s a PR nightmare for Chairman, President and CEO Lance Fritz, as one report stating that UP had decreased railroad police in the target area has gone viral. It was made worse by California Governor Gavin Newsom, in a blatant photo op (pictured), walking the crime scene as if he is surveying the damage to a suburban community following a state of emergency. Potentially worse still was an accusation levied by UP against Los Angeles that the thefts were the result of poor policing and lenient sentencing. A sarcastic columnist might suggest that a railroad executive chastising a local police force might be a sure-fire way to have the next few thefts go unnoticed until after the crime has been committed.

This is a two-part problem. On one side, rail sometimes cannot gracefully get out of its own way. On the other, rail’s devil horns are consistently contrasted against a trucking industry halo. Both parts devalue the importance of rail to the national economy. These fuel a consistent misunderstanding of the complexity of operating a nationwide rail network safely; the preponderant level of conflicting rulemaking that often stymies rail growth and opportunistically encourages on ongoing mythology that the railroads constantly miss their mark. Meanwhile, North American rail’s role as the favorite whipping post is maintained. Don’t think it’s a financial matter? Think again!