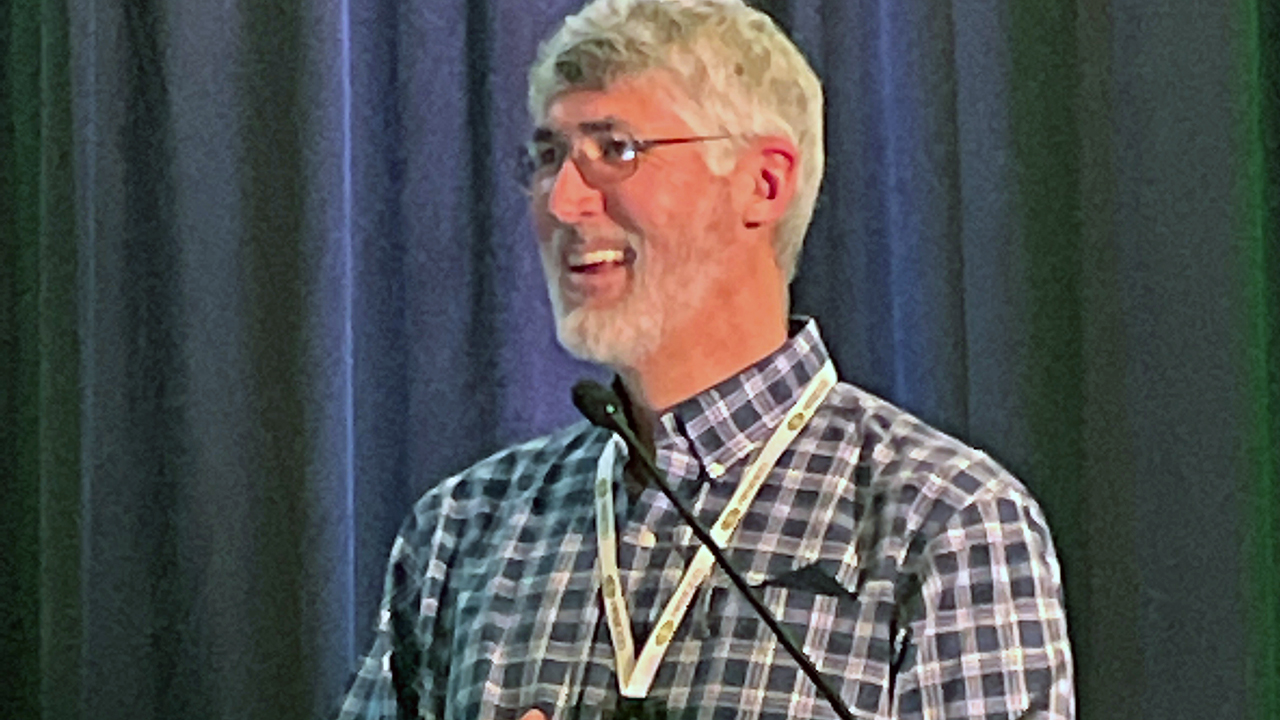 FINANCIAL EDGE, RAILWAY AGE APRIL 2022 ISSUE: After a 2020 Rail Equipment Finance Conference that more or less shut off the lights heading into the beginning of the COVID-19 pandemic, the 2022 Rail Equipment Finance Conference set a tone for normalcy in a rail market finding its footing heading into an uncertain future. The 330 attendees at the REF 2022 conference were treated to a full roster of 37 speakers over two and a half days.

Here’s a summary of what was said at this year’s conference.

Dr. David Humphrey, REF’s railcar guru from Railinc, noted that the North American railcar fleet shrunk by almost 30,000 railcars. Other notes: Covered hoppers represent more than 50% of the total fleet, and along with tank cars have seen the largest increase in total fleet capacity in the recent era.

Dr. Sergio Rebelo, MUFG Bank Distinguished Professor of International Finance at the Kellogg School of Management, Northwestern University, noted that while inflation increases are real and surprisingly high, the recent increases are based on a recent baseline where the reported numbers are showing higher increases than what is actually happening (versus the five year break-even inflation rate). Wage growth and employment openings remain high. The ongoing war in Ukraine will continue to impact world trade, the energy picture and ongoing polarization of U.S. politics.

Thomas Ellman and Eric Marchetto, CFOs from GATX and TrinityRail, respectively, discussed their ongoing support for Rail Pulse, and the ongoing need for additional and sustainable loadings growth. Both see interest rates impacting car costs and lease rates, and are expecting current lease rate increases to remain sustainable in the medium term. Employment difficulties are an issue, but less so in Mexico.

Eric Starks, FTR Transportation Intelligence, highlighted the ongoing and sustained demand for trucking while tracking the decreasing rail market share as measured by ton miles. Starks sees new railcar deliveries in 2022 at 43,000; they will advance to 53,000 in 2023 before reducing to below 40,000 in 2024 and 2025.

Oliver Wyman’s Adrienne Bailey discussed the great pivot: the need for North American railroads to pivot away from a focus on OR and toward expanded loadings growth at higher margin levels. The key statistical takeaway on this point: Since 2006, Class I railroads have freed up 120 million train miles of capacity on the rails. It’s revenue, it’s market share and it’s long-term growth. It’s necessary now.

Ron Sucik of RSE Consulting, covering the intermodal market, expects supply chain difficulties to continue into the second half of 2022 and an ongoing shift to nearshoring. Sucik also sees TTX adding an additional 3,300-6,600 intermodal platform capacity in 2022 and 2023 through a mix of leased cars and new car purchases.

Jeff Blake, The David J. Joseph Co., highlighted the sustainable aspects of the steel industry and its pivot toward a greener future with lighter railcars with increased capacity.

John Ward, National Coal Transportation Association, had the first-ever REF reference to Joan Didion (The Year of Magical Thinking) while discussing the ongoing regulatory struggle to move coal on the rails. Although loadings have increased due to natural gas pricing and met coal demand, Ward noted ongoing government regulatory pressure. Coal is being pressured by railroad service and maintenance issues.

Watco’s Stefan Loeb highlighted short line railroading’s positive growth and entrepreneurial bend. Investment in the segment is at all-time high levels. Watco has pivoted to focusing on terminal applications for service in addition to strategic rail line growth. Short lines can be a first- and last-mile tool to help engineer Class I growth. Watco is also backing Rail Pulse for smoother and more data-driven logistical success.

On boxcars, Ross Corthell, Packaging Corp. of America; Adam Simeon, Union Pacific; and Paul Titterton, GATX, discussed the need for sustainable investment and productivity and for the potential for Rail Pulse to help improve productivity and efficiency. Boxcar market share needs to be expanded and protected. With almost the entire boxcar fleet being utilized and the fleet shrinking, future investment is key in supporting a market poised for additional growth.

PLG Consulting’s Graham Brisben in his energy market overview discussed the demand for renewable diesel, the slowdown in further expansion in the plastics market, and a potential game-changer in the movement of crude from Canada. On the latter, the movement of DRU by rail (under the trademark DRUbit) could increase Canadian crude volumes dramatically.

Mike Cory, retired Executive Vice President and Chief Operating Officer, CN, and Gil Lamphere, Managing Director, Lamphere Capital Management, discussed the post-Precision Scheduled Railroading environment and how the railroads could pivot to renew growth and increase loadings with Railway Age Editor-in-Chief William C. Vantuono. Both acknowledged dropoffs in service that corresponded to a decrease in loadings and the labor pool (rail is not immune to the labor issues impacting other industries) as surmountable obstacles on the road to loadings improvement.

Independent Wall Street analyst Tony Hatch echoed the run-up in short line valuations and explained how the railroads (post-PSR) have indicated they are pivoting toward growth and now need to back up those words with actions. The actions of the next generation of railroad leadership is the narrative driver going forward. There was also a discussion about the improved focus on technology and excitement about the impending STB hearings on reciprocal switching.

Day 3 of REF 2022 focused on the locomotive market. As one might expect, a hot topic of discussion was alternative fueling options for North American rail.

Don Graab, Triangle Brothers and Associates, LLC, with assistance from Glen Rees (Cummins) and Greg Hall (Knoxville Locomotive Works), introduced a KLW-designed and Cummins-powered road locomotive in testing on CN that uses a Cummins QSK95 engine. The locomotive is based around Tier 4 compliance with a move to carbon neutrality via use of renewable diesel. The trio discussed the trend in ESG at the Class I level and the long-term need for attention to ESG-related matters.

Glen Rees’ presentation can be summed up with the phrase: “Getting to zero (emissions) is not a light switch.” Cummins plays a leadership role in carbon-neutral engine tech. Starting with trucking and moving to locomotives, Cummins outlined its vision of the pathway toward a carbon-neutral future, including the idea of post-2030 hydrogen-based locomotive solutions.

Peter Thomas from Wabtec focused on the Wabtec path forward for renewal of the existing locomotive fleet by applying technology and turning the locomotive fleet toward more carbon-neutral positioning. It originates with Wabtec’s FLXdrive 2.0 battery locomotive and moves to hydrogen (starting with rail yard-based solutions) and then to the road locomotive heading into a similar 2030 time frame.

Tom Chenoweth from NRE discussed NRE’s role in the CP hydrogen locomotive project and a variety of NRE’s battery and hydrogen locomotive designs. There was an additional discussion on the potential for Tier 5 emissions rules, how the industry might work on a phase-in of those regulations, the impact on existing tier level emissions standards, and on locomotives impacted by a significant change in the underlying rules. The road forward for locomotive owners is not likely to get easier to understand.

Stuart Biggs, Biggs Appraisal,  discussed the changing locomotive fleet and the weak new-build market. While rebuilding continues, the Umler files do not require restatement or elimination of non-utilized or under-utilized units. Therefore, the addition of 140 SD40 locomotives into the national fleet while completely irrational technologically and operationally is data feasible. Go figure.

David Scott of CNGmotive discussed the pathway to carbon neutrality through the use of renewable methane. This is a solution with proven technology available right now. Most important, locomotive technology already uses natural gas as a fuel, so a conversion to the utilization of renewable and/or synthetic methane is an easy pivot with immediate environmental impact and a cost structure that aligns with current fuel expenses. CNG is looking for a sponsor railroad to help advance the cause of carbon neutrality by embracing a test of CNG in North America.

Jason Kuehn, Oliver Wyman, looked at the emissions targets of the Class I railroads while addressing the unique challenges facing emission curtailment in North American rail (length of haul and network interoperability). He noted that biofuels do not represent a long-term solution to the emissions puzzle. He also noted the challenges in converting line haul units to hydrogen for broad-based use. Key takeaway: The issues regarding curtailment of GHCs are economic rather than technological.

Fun in the sun (and in the conference ballroom) at REF 2022.  Great people, great speakers and great content. See you next year at REF 2023!