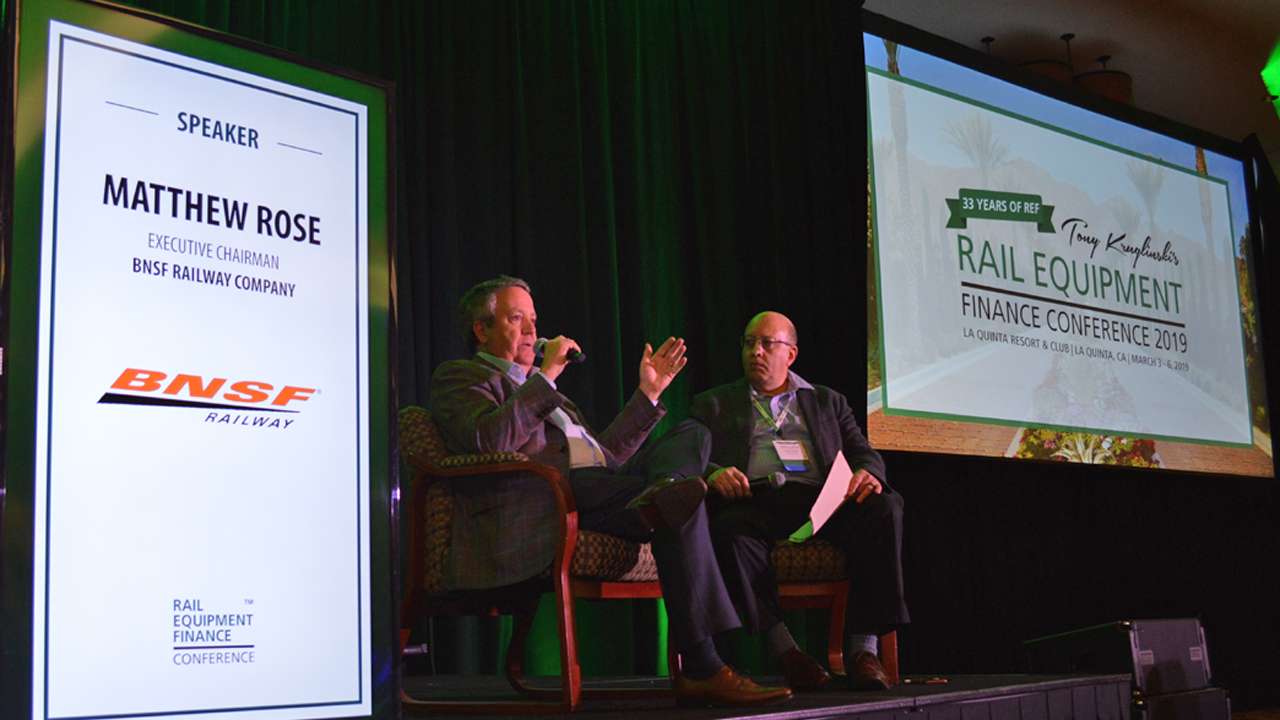 Clearly speaking to a broader audience than Wall Street, Rose said BNSF’s business outlook is “robust,” and the railroad intends to “go deep” for growth with its partners and its customers.

Six of the seven North American Class I railroads have either gone to PSR or are implementing it. “The railroad industry seems to have reached a crossroads that feels a little like a post-Staggers Act hangover,” Vantuono noted. “On the one hand, we have a movement aggressively in the direction of PSR). On the other, we have a customer base and service provider base that feels that the railroads do not efficiently pursue available traffic and increased volume, and may not be acting in the best interests of the rail industry. So, at the present time there seem to be two business models. One is the PSR-based model that favors decreasing expenses and increasing EBITDA as a percentage of revenue, yielding a lower operating ratio (OR). A company whose primary purpose is ‘increasing shareholder value.’ Clearly, Wall Street sell-side analysts seem to favor this model.

“The other is a volume-based model that would increase revenue, with some lower margins leading to higher EBITDA, but as a lower percentage of revenue, and a higher OR. A company for which serving customers is its primary purpose. Which do you think is the sustainable model?”

“Trying to be more precise-like in scheduling isn’t something new at BNSF,” Rose said. “We have a history of trying to do just that. Growth in customer business is our focus. Cost cutting as a PSR theme only goes so far. Yes, ‘sweating out the assets’ has to be part of a balancing act, but BNSF balances its management of the railroad toward benefits shared by employees, customers, investors and the community at large.”

“A PSR method that seeks about $125 million in cost savings from every thousand employees cut isn’t thinking long term, as it often ignores service disruptions to customers,” Rose noted. “Cutting capex to a lower percentage of revenues, for example, less than 15%, to achieve PSR goals isn’t the correct measurement.” It’s better to base capex based on GTMs (gross ton-miles), supporting the necessary required maintenance, or perhaps as a “traffic velocity congestion relief investment.”

As a required corporate goal, BNSF seeks continued traffic growth in volume. “This is essential,” Rose said. “BNSF needs to grow units, not just revenue yield. Disengaging from our customers to change internal cost savings is not a good long-term business strategy. De-marketing tactics can result in unanticipated but logical bad public policy outcomes. There’s nothing wrong with being a low-cost supplier, but ignoring your customers until you hit a wall on costs can have undesirable longer-term consequences.”

BNSF prefers a “balanced approach” to operations, Rose stressed. Growing traffic units and operating income is a better way to increase revenues that figure into the OR (operating ratio). BNSF also focuses on improving its return on assets, “effectively using capital at today’s real cost of about 7%. There is a natural market demand imbalance to many rail freight commodities. Empty-car returns have to be expected. Excessive storing of locomotives has service reliability consequences—railroads need to have a balanced locomotive power reserve available. The PSR emphasis on reporting gross units stored has a dark side. All this makes PSR ‘balancing’ a very difficult task. Without balance, railroads run the risk of encouraging unintended political consequences and disruption of commerce.”

“We hear significant discussion about short- and medium-length intermodal hauls as a growth opportunity for North American railroads,” Vantuono asked. “What are the hurdles for increasing market share in that business segment? Can it work in a PSR model?”

“Volume growth will largely be intermodal-focused,” Rose said. “BNSF’s intermodal strategy is to extend single-line intermodal steel-wheel service eastward into Ohio and Georgia. We continue to rely upon our core customers as the critical first-mile and last-mile organizer of intermodal growth—UPS, J.B. Hunt, etc.”

On coal, “rail volume drop has not yet stabilized, but it’s not in free fall,” Rose noted. “But face it: Coal is a long term headwind. Look for a continued step-drop in volume as coal-fired power station closings continue in the decade ahead.”

Addressing independent Wall Street analyst/consultant Tony Hatch’s (whose market outlook presentation preceded Rose’s session) definition of the current freight rail environment as “Renaissance 2,” Rose said that it “has to happen without a return of coal.”

Rose was asked about technology, in general, what he calls “PTC 2.0,” that is, PTC with business benefits beyond safety improvements; autonomous or semi-autonomous trains; remote onboard equipment health monitoring/tracking/tracing; and wayside fault detection and trending. What value are these technologies bringing, or can potentially bring, to the industry? What are the current hurdles for implementing more advanced technology on North American railroads?

“BNSF for the past seven years has been engaged with PTC suppliers like Wabtec on how we can effectively integrate PTC basics into better intelligence and service for our customers,” Rose said. “Fully automated trains are unlikely, given our approximately 36,000 grade crossings. We say ‘yes’ to attended automation of some train control functionality and train dispatching procedures for safety and better efficiency, as well as to using PTC Version 2 upgrades for better customer inventory and motion visibility. There are significant train capacity advantages as PTC installation problems are replaced by a search on how to mine GPS functionality.”

PTC 2.0, through moving-block operations (rather than legacy fixed-block), improved crew calling and train ETA predictability, “has the potential to increase capacity without added expensive track capex,” Rose said. “Many other benefits from a constant two-way (train/wayside) communications system are possible.”