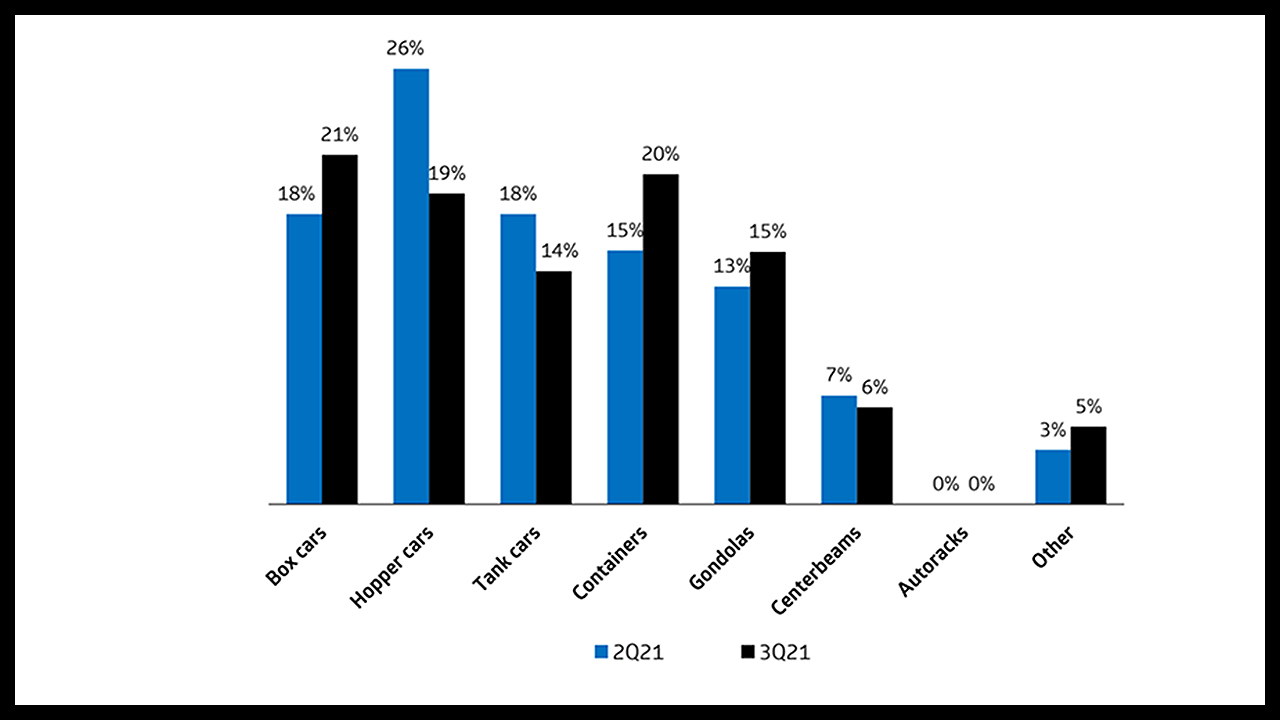 “The order outlook by the shipper sub-group of railcar buyers improved slightly,” the analysts reported. “But market dynamics continue to be more decidedly positive for lessors in the near term.” As for what shippers are expecting in terms of rates, they “expect rail price increases of 4.2%, flat sequentially and above the survey’s five-year average. Business trends in 3Q2021 ticked down sequentially, while 70% of shippers cited concerns around rail capacity. Economic confidence ticked down notably, while business growth expectations remained essentially flat sequentially. While this may be seen as a modest negative, a lot seems to be in the stocks already.”

Roughly 48% of all shippers surveyed said they will or may order railcars in the next 12 months, in line with Cowen’s 2Q21 survey. About 52% said they do not plan to order railcars, compared to 53% in 2Q21. “The largely unchanged result suggests that demand remains strong, but that the steel premium may still be keeping some buyers on the sidelines,” the analysts noted. “This should continue to give momentum to lease rates on existing fleets.”

Within the 48% of total shippers who are contemplating orders in the next 12 months, 60% said “yes,” they plan to place orders, vs. 48% in 2Q21, and 40% said “maybe,” compared with 52% in 2Q21. “This points to an increase in the level of certainty about ordering within the total shipper group relative to the past quarter,” Cowen said. “For some buyers who have been waiting for the steel premium to ease, fulfillment of the need for new cars cannot be pushed off further. This is an incremental positive for manufacturers.”

Cowen reported that 70% of shippers said they are concerned about rail capacity, an 8 bps jump compared to 2Q21, and a 2 bps jump compared to 3Q20. “With a clear increase in the concern about rail capacity, a survey record, it indicates the clear overall tightness across all modes of transportation has continued,” the analysts noted. “Among those who cited equipment as their cause for concern, more cited locomotives, box cars, hopper cars and gondolas, while fewer respondents answered tank cars, containers and centerbeams. Results were relatively in line with 2Q21, although containers are the number one cause of concern when it comes to rail equipment.

This quarter’s response for expectations for business growth of 3.2% is essentially flat—up 0.1% sequentially, and well below the survey’s 4.0% long-term average, though above the 2016-present average of 2.5% in 1Q21. Cowen noted “a few outliers in the data calling for 50% growth,” only 30% of shippers answered that they are more confident in the direction of the economy today than they were three months ago, down significantly from 63% last quarter, below the survey’s 48% average. “This substantial change in economic confidence is noteworthy, which may be partially due to the significant headwinds shippers are facing across all modes of transportation,” Cowen said, adding that 71% of shippers who answered our 3Q survey indicated that their business is back to running at pre-COVID-19 levels, while 29% answered that it isn’t. This is a minor sequential step down compared to 2Q21, where 78% of shippers indicated business is back to pre-COVID-19 levels. This could be due to lingering impacts from the Delta variant.”

Cowen also reported that 76% of participants stated that they are having trouble hiring employees, up from 71% in 2Q21; 18% are not having trouble ,down 3% sequentially. “We have heard from many industry contacts that hiring has been a significant headwind due to various macro factors that have made it difficult for companies to grow headcount,” Seidl, Elkott and Alper noted. “Of the 76% having trouble hiring employees, 49% believe that it is hindering growth, up significantly from 35% last quarter. We found this data point interesting and will continue to monitor it, particularly surrounding the expiration of federal stimulus.”

Shippers anticipate rail prices to increase by 4.2% over the next 6-12 months, flat compared to the past quarter’s survey. “The 4.2% result is above rail cost inflation, above the survey’s five-year average of 3.3% and long-term 10-year average of 3.6%,” the analysts said. “The flat sequential move indicates a continuation of tight supply chain conditions that continue to exist in North America, although we were somewhat surprised the result did not show some sequential improvement, given the strong pricing environment we have been hearing from industry contacts. That said, it should be noted that when looking on a ‘same shipper’ basis, expectations were for a 4.3% increase vs. 4.0% in the prior quarter.”