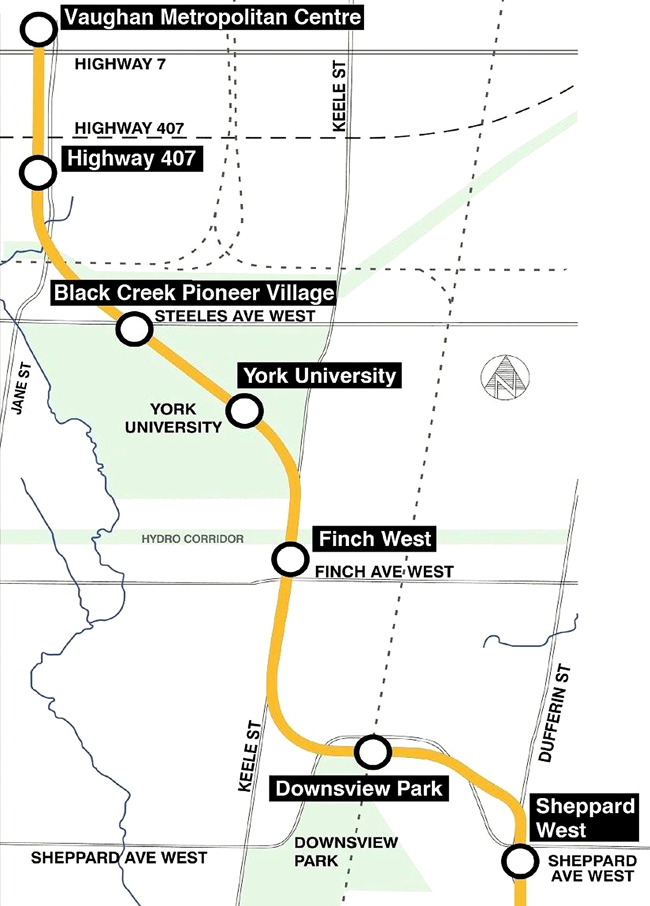 The C$3.2 billion extension is the first on Toronto’s subway since the Sheppard line opened in 2002. It adds about 13 minutes of travel time along Line 1. Total travel time from Vaughan Metropolitan Centre to Union Station downtown is 42 minutes. There are six new stations: Downsview Park, Finch West, York University, Pioneer Village, Highway 407 and Vaughan Metropolitan Centre. The stations are all fully accessible; Wi-Fi-, cell- and Presto farecard-enabled, and have amenities such as bike facilities. TTC says the extension will add an estimated 36 million transit trips and eliminate 30 million car trips per year. That includes the first-ever subway trips to York University.

TYSSE boasts another first: A radio-based communications-based train control (CBTC) system utilizing ATO (automatic train operation)—the first such system in revenue service on a metro line in Canada. Alstom supplied its Urbalis 400 technology. The complete project scope includes replacement of the relay-based interlocking on Line 1, and deployment of CBTC across all of Line 1, including the TYSSE green field extension area, as well as control center updates. Project activities include replacing the current track circuit system with an axle counter-based detection system, and installing CBTC equipment on more than 80 Bombardier Toronto Rocket subway cars.

Alstom says Urbalis 400 “will help TTC not only reduce headways and provide for 25% additional line capacity, but also increase operational performance and reliability.” The entire line, on which some of the original signaling equipment dates back to 1954, is expected to be fitted with CBTC by 2019.

“Alstom is pleased to be part of this unique project and to support the TTC’s commitment to passengers with improved service, namely faster and more reliable travel on the busiest line of the system,” said Angelo Guercioni, Managing Director of Alstom Canada. “This is just the first step in modernizing the signaling system and bringing state-of-the-art signaling technology to TTC operations. Our team remains at the ready to continue to deliver the performance expected of us and to resignal the entire Line 1.”

In addition to the project with the TTC, Alstom is currently executing projects to supply Metrolinx with a new Iconis control center to integrate the GO Transit regional/commuter rail network into a centralized facility, a new signaling system for the Union Station Rail Corridor, and 61 Citadis Spirit light rail vehicles.