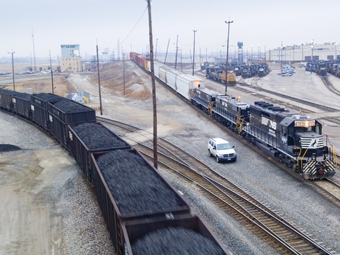 The pressing issue for the railroad industry’s communications and signal engineers is whether or not Positive Train Control (PTC) is going to be complete and fully functional by the fast-approaching Dec. 31, 2015, deadline.

For some elements of the U.S. government—in particular, the Federal Communications Commission (FCC) processes, which present a serious barrier to finishing PTC wayside antenna installation—PTC is the elephant in the room, the looming big issue that is either being ignored or going unaddressed.

For the railroads, which are pushing ahead on an unfunded mandate whose deadline they probably won’t be able to meet due to circumstances largely beyond their control, PTC, as Railway Age Engineering Editor Mischa Wanek-Libman describes it, is “the elephant the industry is trying to tame.”

CN, for example, reports it “is taking steps to ensure implementation of PTC, including working with other Class I railroads to satisfy the requirements for U.S. network interoperability.” The Federal Railroad Administration approved the railroad’s PTC Implementation Plan, submitted in April 2010. But 28 months later, in August 2012, an FRA report to Congress on PTC implementation progress said that most railroads would be unable to meet the deadline. In August 2013, legislation was introduced in the Senate that would delay PTC implementation by five years to the end of 2020. In the same month, the U.S. Government Accountability Office published a report recommending that Congress give the FRA authority to extend the deadline for individual carriers on a case-by-case basis.

What’s happened since then? Not much, and the regulatory delays get worse. In May 2013, the FCC began to review the potential impacts that installing tens of thousands of required PTC wayside radio antenna poles could have on Native American historic and cultural artifacts. Necessary, industry-recommended changes to antenna installation procedures—specifically, dealing with permits in volume, rather than case-by-case—are still in political limbo. In its March 2014 PTC status update to the FRA, the Association of American Railroads reported that “it is clear that the railroad industry will not be able to install interoperable PTC on the entire U.S. network by the deadline.”

In effect, the railroads’ brisk, entirely self-funded march toward an interoperable PTC system now looks more like a slog through waist-deep muck.

CN estimates its total PTC implementation costs at $335 million for the U.S. portion of its network. That’s huge, except when compared to railroads like Union Pacific and CSX. CSX’s total PTC cost, for example, will be around $1.7 billion for equipping 3,600 locomotives and installing equipment at 6,400 wayside locations on 15,000 track-miles—75% of its network. Around 1,000 CSX employees are working solely on PTC, but thousands more require training on the new technology.

However, “our progress has been slowed down by the FCC processes,” says LeVere. “We can’t go out to a PTC location and finish an installation in one shot. We’re not sure what the final ruling is going to be on the FCC’s tribal review process for antennas.” But railroaders tend to be optimistic, “can-do” people. “We remain hopeful,” says LeVere. “PTC is a good safety system. The technology, and our greenfielding approach to installation, have produced many benefits for renewing our Communications and Signal (C&S) infrastructure. We’re determined to get PTC installed.”

Not the only game in town

As railroads struggle with this bureaucracy-laden mandate, they have to remember that PTC isn’t the only game in town. As LeVere and his C&S colleagues around the industry will tell you, there’s a whole lot more going on in C&S than PTC. “We have a strong capital maintenance program,” LeVere says. “We’re getting close to eliminating what’s left of pole lines. We’re installing more wayside mechanical defect detectors on many corridors, including our ethanol and crude oil routes. And we’re working with the states on hundreds of grade crossing warning systems that need to be upgraded.”

BNSF has made a major commitment to upgrading its classification yards, and is in the midst of an initiative to replace outmoded yard process control and automation systems. “Many of our class yard systems are based on 1980s computer technology,” LeVere says. “We’re working to get them renewed, to make our class yards more fluid and efficient.”

In Ohio, Norfolk Southern’s Bellevue yard is undergoing a major expansion and transformation. Assistant Vice President Communications and Signals Ed Boyle describes the project as a critical part of mitigating bottlenecks across NS’s network. Located midway between Toledo and Cleveland, Bellevue is at the confluence of several major NS east-west and north-south main lines. Many trains are routed between the Lake and Dearborn divisions at Bellevue. Also, numerous intermodal trains operating on NS’s Heartland Corridor between Virginia’s ports and Chicago pass through there.

Bellevue is essentially being doubled in size to 80 classification tracks, with two hump leads that provide access to the entire yard from either lead by means of a scissor crossover. The hump leads can also work simultaneously, feeding cars independently to their respective sides of the yard. It will be the only one of NS’s 12 production yards with dual-humping capability, doubling the average 600 to 650 cars per shift it currently handles, and more than doubling train speed, to 25 mph from 10 mph.

Hardware for the 5.5-mile-long, $160 million project includes 140 powered turnouts, 38.5 miles of additional track, approximately 145 miles of underground cable for the communications and signals system, and 11 control points, plus car retarders, wheel detectors, and distance-to-coupling circuits—all being installed while the yard remains in operation. Bellevue’s expansion is being equipped with one master retarder, five group retarders, and 38 skate retarders.

Trainyard Tech LLC, which has upgraded several NS class yards during the past few years with its CLASSMASTER™ technology, is providing Bellevue’s process control and automation systems, everything from the hump system to the receiving yard, pullout yard, and blue-flagging equipment.

When completed in early 2015, Bellevue—the biggest construction project on an NS production yard in decades—will be the railroad’s largest hump yard and the largest yard in North America where all tracks are humped from one process control system. “Bellevue is located at a ‘sweet spot’ of increasing train traffic in our Northern Region,” says NS Director Terminal Operations John LeStrange. “A big driver of the volume is a drilling boom to extract natural gas from the Marcellus Shale deposit. Steel-making and the automotive industry also are key factors. Strategically, it’s right where all the traffic wants to go,” based on the computer models NS uses to forecast future traffic flow. Those models show that Bellevue “provides the most efficient route to switch cars for timely delivery to customers,” he says.

Another bottleneck on the NS system receiving an upgrade is Randoph Street Interlocking in Roanoke, Va., the only location on the railroad where the Heartland and Crescent Corridors cross. A combination of track expansion and signal work, the project involves building four tangent tracks, each with a controlling signal at each end, and higher-speed turnouts. When completed by year-end, train speeds through this interlocking will double, from 15 mph to 30 mph, effectively doubling capacity. “It’s amazing what relieving one bottleneck can do,” says Ed Boyle.

Of course, PTC remains a huge undertaking for NS. “We’re working full steam ahead on construction,” says Boyle. “At roughly 300 locations, we have completed construction on everything—except the antennas. Our biggest concern is getting them installed.”

FCC, the railroads are holding up their end of the agreement. What are you waiting for?