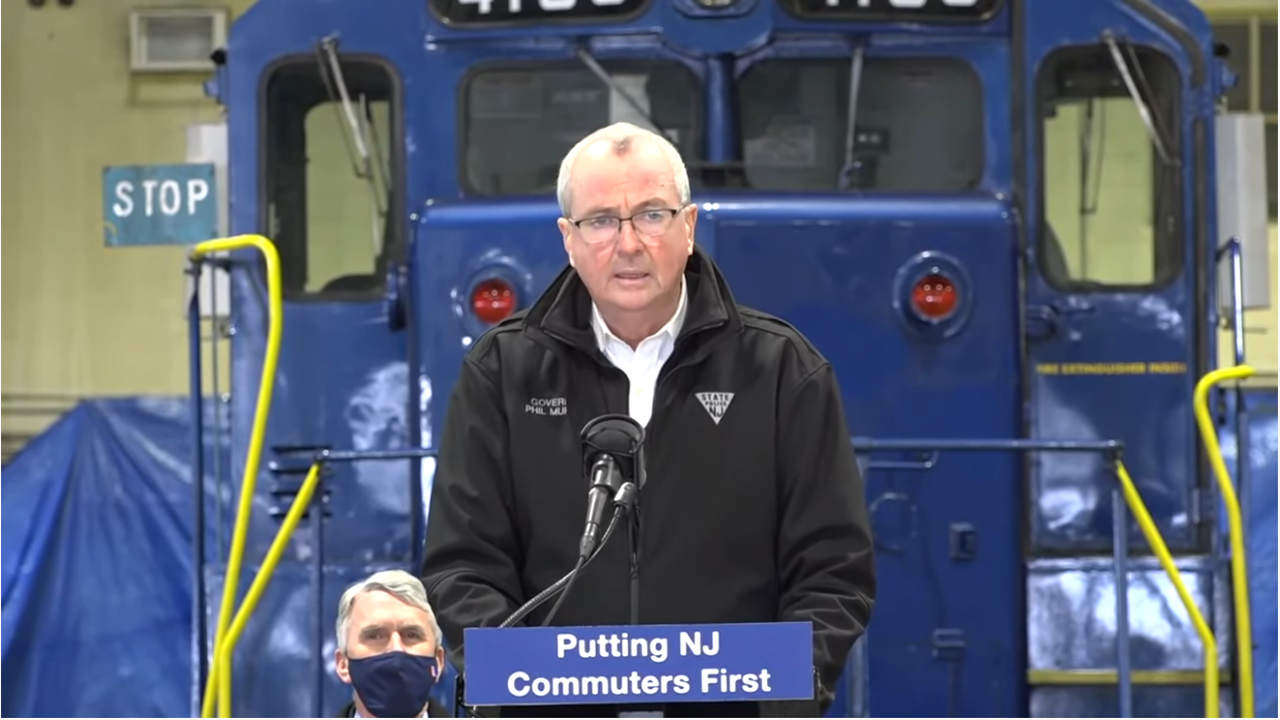 New Jersey Gov. Phil Murphy announces that NJ Transit has completed all the requirements for the installation, testing, and training of Positive Train Control at the Meadows Maintenance Complex in Kearny, N.J., Dec. 18, 2020.

In New Jersey Transit’s epic struggle with implementing Positive Train Control by the Dec. 31, 2020 federal deadline, the agency came in under the wire(s), literally.

Behind all the hoopla are three PTC approval letters from the FRA addressed to NJT Rail Operations Acting General Manager Jim Sincaglia. The first, and by far the most important, is New Jersey Transit’s Positive Train Control Safety Plan – Conditional Approval, Conditional Certification of Its Advanced Speed Enforcement System II, and Certification of Its Interoperable Electronic Train Management System (Docket Number FRA-2010-0033). It reads, in part:

“Version 10.1 of NJT’s PTCIP also updated the implementation schedule for certain Class II and Class III tenant railroads. NJT’s updated implementation schedule now requires these tenant railroads’ operations (specifically, Dover & Delaware Railroad; Middletown & New Jersey Railroad; Morristown & Erie Railway; The New York, Susquehanna & Western Railway Corporation; and Southern Railroad of New Jersey) to be controlled by fully operative PTC-equipped locomotives by December 31, 2023 (instead of December 31, 2020), pursuant to the temporary exception under 49 CFR § 236.1006(b)(4)(iii)(B) … In addition, NJT confirmed it is requiring such tenant railroads to operate with an onboard cab signal system on NJT’s PTC-mandated main lines until their onboard PTC systems are fully implemented. As a reminder, each Class II or III railroad operating on NJT’s PTC-mandated main lines pursuant to an exception … must continue to meet the criteria … For example, each applicable Class II or III railroad may operate only four or fewer unequipped trains per day… on NJT’s PTC-mandated main lines. In addition, such tenant railroads must submit progress-related reports to FRA by December 31, 2020, and December 31, 2022 … After careful consideration, FRA hereby approves NJT’s RFA and revised PTCIP, Version 10.1, both dated December 3, 2020.”

The third FRA letter, New Jersey Transit’s Request for Amendment to Its Positive Train Control Implementation Plan — Approval (Docket No. FRA-2010-0033), is similar to above extension approval, but it addresses certain wayside IETMS locations as well as equipped locomotives and the number of NJT employees trained in PTC. It reads, in part:

“With its RFA, NJT submitted its revised PTCIP, Version 10.1, dated December 3, 2020. NJT’s proposed amendments include updating sections of its PTCIP that describe the specific wayside locations where its Interoperable Electronic Train Management System must be (and has been) installed, based on current operations by certain freight tenant railroads. NJT also updated the quantity of locomotives equipped with a positive train control (PTC) apparatus to 436 from the previously reported 418; this increase in PTC-equipped locomotives will help NJT optimize consist formulations and provide operational flexibility. In addition, to reflect NJT’s current employee roster, NJT updated the number of personnel trained to 2,647 from 2,613, and the number of personnel required to be trained to 2,647 from 2,723.”

The Long Road To ASES II

NJT began to expand ATC in January 1987. Systemwide ATC coverage was completed in 2008. Beginning about 1995, ATC enhancements were introduced to enforce speed restrictions on curves. All NJT track segments that require a reduction of more than 20 MPH from the maximum authorized approach speed, were equipped with ATC by December 2016. ASES II, NJT notes, “is an additional enhancement of the existing ATC system. PTC will provide positive stop enforcement at interlocking signals and more precise enforcement of temporary and permanent speed restrictions.”

Beginning with Revenue Service Demonstration (RSD) on one segment in March 2020, Alstom and Parsons completed implementation and entered Extended Revenue Service Demonstration on all 376 miles of NJ Transit’s territory, as well as the Conrail (Lehigh) line. The supplier and the consultant collaborated through NJT with numerous stakeholders, including Amtrak, Conrail Shared Assets and Norfolk Southern to ensure system interoperability, in many respects the most difficult part of getting ASES II fully operational. NJT achieved full interoperability with Conrail, NS and Amtrak. ASES II is similar to Amtrak’s ACSES (Advanced Civil Speed Enforcement System) II, supplied by Siemens.

“We could not have been successful without the hard work and dedication of the NJT employees assigned to this project, which was arguably one of the most complex in the country,” said NJT President and CEO Kevin Corbett. “Similar to the December 2018 interim milestone, we did what many thought was impossible. In addition to our employees, I want to thank our contractors (Parsons and Alstom), FRA Administrator Ron Batory and his team for their leadership and support, our partners at Amtrak, MTA, SEPTA and the many freight railroads—all of whom were critical to our success. Most important, I want to thank our customers for their continued patience and understanding over the last two years while we worked tirelessly to complete PTC and deliver a safer commute.”

“As FRA Administrator, one of my greatest privileges has been to oversee—and stand alongside—NJT as it fully implemented FRA-certified and interoperable PTC systems on its network,” said Federal Railroad Administrator Ron Batory. “I salute and commend the perseverance and commitment at all levels of NJT’s team to meeting this important deadline.”

“Achieving this critical milestone was made possible by the combined collaboration, innovation, and determination of NJT, FRA, Parsons and Alstom,” said Parsons Chairman and CEO Chuck Harrington. “The team worked tirelessly through a global pandemic to ensure the safety of New Jersey’s rail network.”

“After nearly a decade of neglect and disinvestment under the previous [Chris Christie] administration, I’m thrilled that NJT’s PTC system will today receive certification from the Federal Railroad Administration,” said Governor Murphy. “Our commitment to meeting this deadline and ensuring the safety of every rider along NJT’s rail network is simply an extension of our overall commitment to delivering the world-class transportation experience that NJT customers deserve. As our post-COVID-19 future takes shape in the months ahead, hundreds of thousands of New Jerseyans will again turn to our rail system for their commutes, and NJT will be ready to get them to their destinations more safely than ever.”

Murphy gave a special shout-out to Batory, introducing him by saying, “We have a guy here today, the Federal Railroad Administrator, who may be the most important person as it relates to transportation in the Trump Administration. He’s a guy who has spent decades in rail, most notably for me as running Conrail for two decades. He’s a gentleman, a great leader, and a partner in this.”