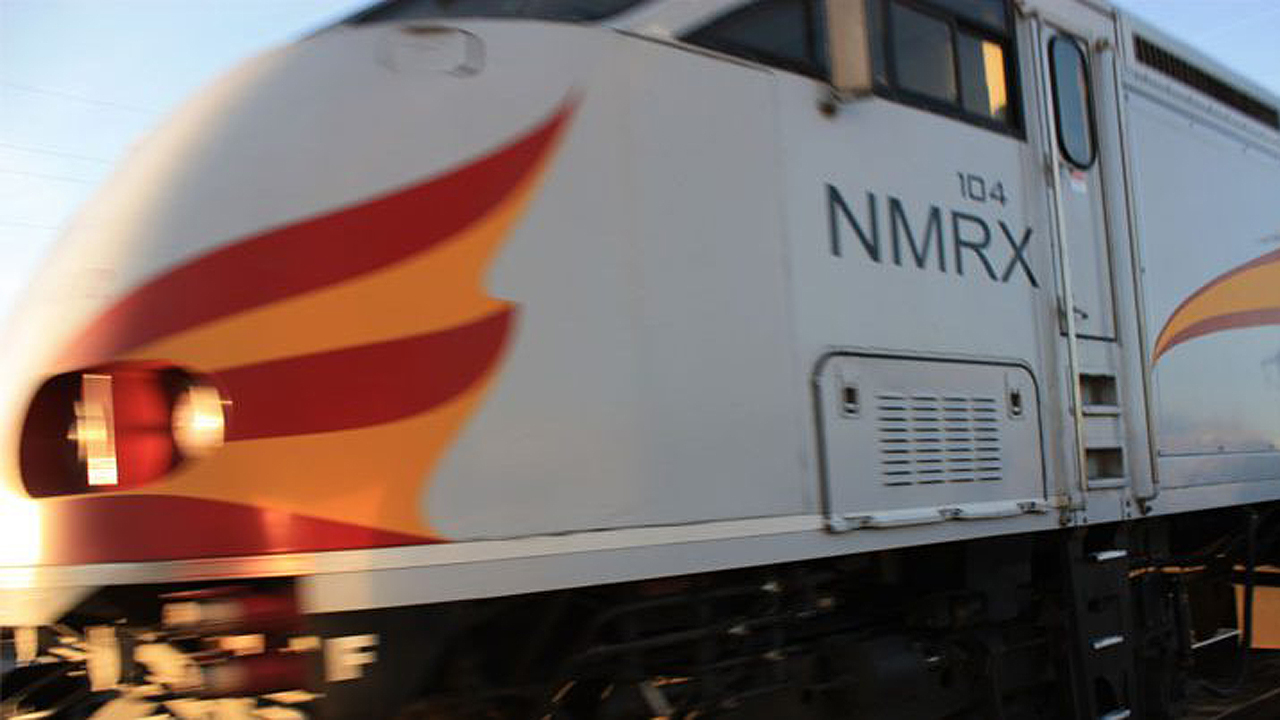 The Federal Railroad Administration (FRA) has awarded more than $200 million in funds to assist with the deployment of Positive Train Control (PTC), with a second solicitation expected soon for a remaining $46 million. As well, the agency released its second-quarter 2018 PTC progress report, which shows “significant improvement.”

Twenty-eight projects in 15 states will receive $203.7 million awarded through the Consolidated Rail Infrastructure and Safety Improvements (CRISI) program. While the initial Notice of Funding Opportunity (NOFO) issued in May said $250 million was available, FRA is expected to issue another NOFO to solicit applications for the remaining funds. FRA promised a “quick turnaround” for the second solicitation, with applications due 30 days from when the NOFO is published in the Federal Register.

“It was our goal to award these grants as quickly as possible to help the recipients implement PTC,” said FRA Administrator Ronald L. Batory. “We also encourage eligible applicants to apply for the remaining balance of the PTC CRISI grants after that NOFO is published.”

Congressional offices had previously released some of the PTC funding. FRA said the awards fund many aspects of PTC system implementation, including back office PTC systems; wayside, communications and onboard PTC system equipment; personnel training; PTC system testing; and interoperability. A full list of awards appears below.

In making the selection decisions for the PTC grants, the factors FRA considered included supporting economic vitality; leveraging federal funding; using innovative approaches to improve safety and expedite project delivery; and holding grant recipients accountable for “achieving specific, measurable outcomes.” FRA said preference was given to projects proposing at least a 50% match and that “maximize the net benefits of the grant funds.

Grants awarded are as follows, by state, then agency; an asterisk by the agency’s name indicates those properties FRA has classified as “at-risk” based on second-quarter 2018 PTC progress reports:

*Peninsula Corridor Joint Powers Board (Caltrain), up to $18.69 million: Build upon Caltrain’s efforts to test and validate certain technical PTC components of its I-ETMS system between San Francisco and southern San Jose.

Florida Department of Transportation (FDOT), up to $14.91 million: Complete installation of I-ETMS, with testing and documentation to support PTC System Certification, on the 61.3-mile Central Florida Rail Corridor from DeLand to Poinciana, Fla. *SunRail operates along this route.

Nebraska Central Railroad Company (NCRC), up to $527,596: Deploy the PTC back office system, onboard hardware equipment for three locomotives, software, component testing and training for NCRC to operate along 62 miles of Union Pacific Railroad tight-of-way between Grand Island and Columbus, Neb..

*Rio Metro Regional Transit District (Rio Metro), up to $29.36 million: Full implementation of New Mexico Rail Runner Express’ (NMRX) I-ETMS PTC system, which will be installed on 96 miles of the NMRX system between Belen, and Santa Fe, N.Mex., including approximately 74 miles of the Albuquerque Subdivision and 22 miles of the Santa Fe Subdivision.

New York & Atlantic Railway Company (NYA), up to $1.01 million: Install PTC onboard equipment on 10 NYA locomotives as well as support training and testing for its operations on freight lines owned by the New York MTA/Long Island Rail Road.

Allegheny Valley Railroad Company (AVR), (1) up to $1.83 million;(2) up to $302,444: (1) Upgrade AVR’s 10 locomotives with PTC and cab signal systems for operations utilizing AVR trackage rights over Norfolk Southern (NS) rail lines, upgrade four other locomotives solely with PTC, and support testing and training. (2) Install a PTC back office and support system engineering, testing and training for AVR operating on 77 miles of right-of-way in the greater Pittsburgh area.

Dallas Area Rapid Transit (DART), up to $9.52 million: Support a PTC back office system, I-ETMS systems integration and interoperability testing with multiple freight and passenger railroads, and training for the Trinity Railway Express and TEXRail commuter railroads in the Dallas-Fort Worth urban area.

Concurrently, FRA released data showing second-quarter progress in implementing PTC. The data showed “significant improvement” compared to where the rail industry stood in December 2016, despite nine railroads being classified as “at-risk.” The statutory interim deadline to implement PTC is Dec. 31, 2018. Railroads that meet six criteria can apply for an alternative schedule to complete installation of PTC no later than Dec. 31, 2020. 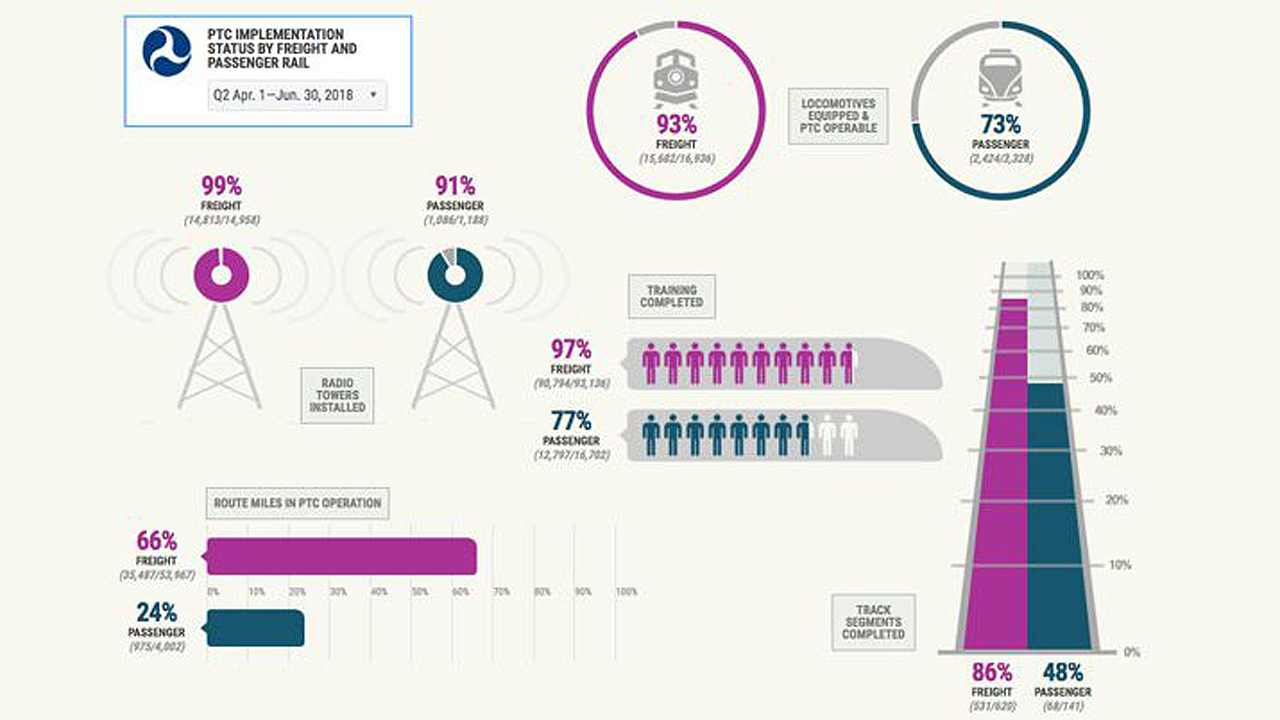 FRA said the most recent data, current as of June 30, 2018, shows that 15 railroads have installed 100% of the PTC system hardware identified in their PTC Implementation Plans; 12 have installed between 95% and 99%; and all railroads, except for one, that use spectrum-based PTC systems have acquired sufficient spectrum. By comparison, in December 2016, freight railroads had PTC active on just 16% of required route-miles, while passenger railroads were at 24%.

In addition, FRA explained that 14 railroads have initiated sufficient Revenue Service Demonstration (RSD) or met substitute criteria, which is one of the six statutory criteria needed to qualify for an alternative schedule of Dec. 31, 2020. PTC systems are in RSD or operation on approximately 37,705 route-miles (65%) of the nearly 58,000 route-miles that are subject to the statutory mandate.

The number of “at-risk” railroads dropped 25%, from 12 to 9, based on Q2 2018 data. FRA currently considers any railroad that installed less than 90% of its PTC system hardware as of June 30, 2018, to be at risk, as “installation of all PTC system hardware is only an initial phase of implementing a PTC system and only one of the six statutory criteria required to qualify for an alternative schedule.”

FRA has held quarterly meetings with those railroads classified as “at-risk” and recently held the final of three symposia focused on PTC. 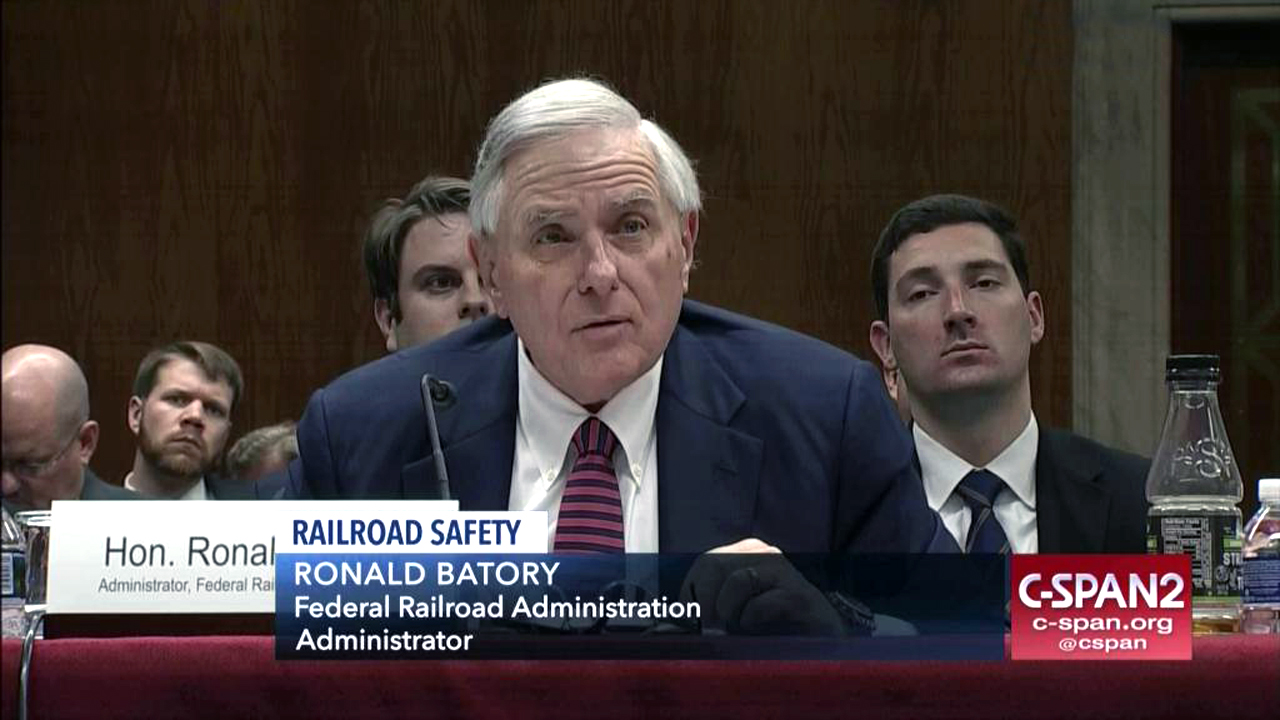