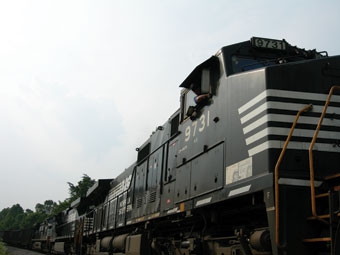 Norfolk Southern said net income for the fourth quarter totaled $3.97 million and earnings per share were $13.79, thanks to federal tax cuts that added $3.48 billion to the bottom line. For the year, net income was $5.4 billion with earnings per share of $18.61, which added $12.10 for the quarter and $12 for the year on the tax reform legislation.

Railway operating revenues of $2.7 billion increased 7% from the year-ago quarter on volumes that were 5% higher, reflecting growth in mainstays intermodal, coal and general merchandise.

Income from railway operations was $1.01 billion. Excluding the tax benefit, adjusted income from operations was $863 million, up 13% year-over-year, and the adjusted operating ratio, or operating expenses as a percentage of revenues, was 67.7% – an improvement of 170 basis points from the prior year.

The company’s board of directors also approved an 18% increase in the quarterly dividend from 61 cents to 72 cents.

“Norfolk Southern is open for growth, and we are optimistic as we head into 2018 that the current economic environment will provide an opportunity for continuing growth,” said Chairman, President and Chief Executive James A. Squires. “The hard work and dedication of our employees in executing our Strategic Plan are clearly evident as we continue to achieve record results and deliver on the commitments we made to our shareholders. We remain steadfast in our commitment to deliver on the goals in our Strategic Plan, of which positioning ourselves for growth is a key element. We are laser-focused on execution of our strategy and are confident that we can achieve our targets by 2020 or sooner.”

In a note to investors, Cowen & Company Managing Director and Railway Age Wall Street Contributing Editor Jason Seidl wrote, “NSC reported another solid quarter, beating our and consensus estimates top to bottom. Adjusted EPS was $1.69, up 19% y/y and above our and Street forecasts of $1.62 and $1.57, respectively. Adjusted operating income was 13% higher than last year and topped our and consensus estimates of $850 MM and $832 MM, respectively.

“Revenue grew 7%…also exceeding our and the Street expectation of $2.6 billion. The adjusted operating ratio improved 170 bps y/y to 67.7%, just 10 bps worse than our estimate but 90 bps better than consensus. Land sales were $25 MM ahead of the prior year but results still would have topped consensus even without the gain.”

Seidl wrote that NS “achieved these results despite severe winter weather that affected much of its network, including in southern regions that are rarely subjected to the type of cold temperatures and winter storms seen in December. As a result, the company’s Composite Service Metric declined to its lowest level in 2017. That said, some key productivity metrics continued to improve sequentially in 4Q, including locomotive, fuel, and train length (which posted a record result in the quarter). All these three productivity metrics posted record results for full year 2017.”

On pricing, “management again sounded decidedly upbeat and noted that it will lean into price to drive shareholder value. [I] indicated that pricing improved throughout the quarter. We believe NSC should not have a problem achieving increases comfortably in excess of rail inflation. We expect pricing to begin to improve further as the freight recovery continues while freight capacity, especially in the truckload market, is tightening. According to our January 16 4Q17 Rail Shipper Survey, respondents expect rail pricing to increase 3.5% on average in the next six-12 months; that’s up from our 3Q17 survey result of 3.2% and our 2Q17 survey result of 3.0%, which in turn was up from 1Q17 of 2.6%.

Seidl wrote, “The company laid out a longer term top-line outlook for 2018-20 of 2% growth in carloadings and yields. At first glance some may feel this is contrary to NSC’s enthusiasm on pricing, however, yields are likely to be negatively impacted by the long term trend of higher yielding coal traffic being replaced largely by lower yielding truck competitive business.

“In addition to continuing to meet or exceed the operational improvement metrics it has set for itself, NSC has found itself in recent months in the enviable position of gaining market share from its eastern competitor, as some shippers, disgruntled by CSX’s service challenges for much of 2017, looked for alternatives. While CSX has made some material improvement in recent months, we believe it will take a bit more time before service returns to optimal levels. NSC is likely to continue to have a more competitive service product in the east for the foreseeable future. Traffic results lend support to the notion that NSC has been taking market share. NSC’s traffic has outperformed CSX’s in January and much of 2017. Our channel checks suggest that NSC was fairly selective in the freight it took on and demanded longer-term commitments from some customers.”