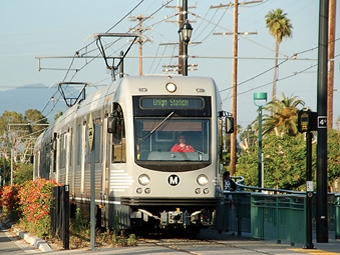 Dramatically debunking the onus of "car-culture" status, Los Angeles is on the move to move more of its area residents with numerous rail options.

When Railway Age detailed the debut of Los Angeles’s 22-mile Blue Line Light Rail Transit, linking the City of Angels and Long Beach, Calif. (RA, June 1990, p. 46), some U.S. observers, even pro-rail ones, saw the event as a novelty, with the patina of Hollywood hyping an event of questionable significance.

And many Angelinos—both those in the city itself and an expatriate or two residing on the East Coast—were equally prone to dismiss anything rail, offering comments such as, “But it doesn’t run near me” or “I won’t/can’t use it.”

How things have changed. No one would argue that the famed, historic Pacific Electric streetcar network has been replicated. But subway and light rail construction have made LA a real player among U.S. rail cities, while expanding Metrolink regional rail service has added the LA Basin to the list of metropolitan areas banking on rail for their economic future. Indeed, Metrolink seeks to break the constraints of “suburb to city” commuter service by creating markets other than a single downtown hub, key though that hub may be.

The idea of LA as a car-only metropolis is in fact “very dated,” says Los Angeles County Metropolitan Transportation Authority (LACMTA) Executive Officer-Regional Rail Don Sepulveda. “If you look at the number of people who take Metrolink, and you start talking about people taking the Red Line or Expo Line, all those folks would be on the freeway. Our freeways would be that much more crazy. You can’t ignore the data or the facts.”

With growing subway and light rail lines already in place, America’s second-largest city is returning to urban rail 60 years after massive disinvestment, and LACMTA has been leading that return within Los Angeles County with a vengeance since the Blue Line opened in 1990.

Since then, the Red Line (subway) opened in 1993, linking downtown LA with North Hollywood. The Purple Line (subway) also opened in 1993, tying downtown to LA’s Mid-Wilshire District. The Green Line LRT opened in 1995, running on an east-west path between Redondo Beach and Norwalk and approaching—though not quite reaching—Los Angeles International Airport. The Gold Line’s first segment debuted in 2003, adding Pasadena to the LRT mix; ongoing work is pushing the line further east.

Sepulveda’s job is to coordinate rail and bus urban transit, Metrolink operations, Amtrak services, and future high speed rail additions, all while communicating with (and soothing) citizens concerned with such change. “We try to involve communities to make sure a given project is understood,” he says. “You can never please everyone, but we’ve made a real strong effort.”

Spurred by a mix of funds, but notably including Measure R funding approved by county voters, “We’re essentially rebuilding the transportation network in the county,” Sepulveda says. He emphasizes the effort is not duplicating past history per se, but to bring rail transit services “up to the modern age.” Subways in LA, of course, are a relatively new phenomenon, while Sepulveda does allow that the Expo Line LRT “is essentially an old Pacific Electric [streetcar] line.”

The public seems to be pleased. Expo ridership has been “extremely successful,” Sepulveda says, contributing to total daily weekday Metro rail ridership in excess of 344,000.

Founded in 1991 and beginning revenue operations in 1992, Metrolink in 22 years has put the Los Angeles Basin on the U.S. regional rail map, with seven lines serving six California counties and brand-name awareness reaching across the country. LACMTA funds 52% of Metrolink, with the four other agencies comprising the Southern California Regional Rail Authority (SCRRA) funding 48%.

In a span of 23 years, Metrolink has helped rupture the “cars only” stereotype of the Los Angeles Basin, as ridership use expands beyond traditional “suburb to downtown” commuter service.

Indeed, most Metrolink routes operate seven days a week, with only the Riverside and 91 Lines limited to weekday operation—and Metrolink clearly desires to expand service offerings on those two lines as well.

“I think part of our growth area is on weekends,” says Metrolink CEO Michael P. DePallo. “We’re seeing more recreational travel, trips to the beaches. Orange County is an area of growth for us.”

Metrolink’s Angels Express train, operating before and after home games of the namesake Major League Baseball team, is one such example of expanding market reach. In conjunction with LA Metro, Metrolink also operates special service to special Los Angeles Dodgers games, and offers “special service” for the interleague rivalry between the two teams.

Metrolink served 40,182 riders per day in its fiscal third quarter of 2014, which ended March 31, down slightly from the comparable FY13 quarter. Numerous outlying municipalities are clamoring for Metrolink extensions and service, which would substantially add to current operations along 512 route-miles. Metrolink owns 343 miles of right-of-way, operating as a tenant of either Union Pacific or BNSF over other portions of its service area.

The partnerships offer big opportunities for joint cooperation, including establishing Positive Train Control (PTC) ahead of the Dec. 31, 2015 deadline imposed by Congress. The Chatswork, Calif., collision of a Metrolink and UP train in September 2008 proved a catalyst for implementation and, unlike many of its regional passenger brethren, Metrolink’s PTC installation is “nearly complete,” DePallo says. “We’re well along. Back in February, we partnered with BNSF with a revenue service demonstration on our 91 line.” BNSF as a partner was “very cooperative and helpful,” and the test was judged successful by both railroads.

“We start rolling out our PTC dispatch in September on the San Bernadino Line, then we’ll follow on the rest of the system,” DePallo says. “We hope to have the entire system online [with PTC] probably by January 2015, adding it line by line.” If that schedule holds, Metrolink will have PTC in place 11 months before the congressional deadline of December 31, 2015.

Metrolink also is outpacing many of its regional railroad brethren in meeting locomotive emissions standards. DePallo says the railroad’s 20 EMD F125 low-emission “Spirit” Tier IV locomotives, recently purchased, will offer higher horsepower while reducing a wide range of pollutants, including nitrogen oxide (NOx) emissions by 85%. “We’re going to be the first to have that” among regional railroads, DePallo asserts.

Metrolink’s rail business relationships extend beyond the Class I’s. Its “Rail to Rail” joint venture with Amtrak allows riders to use trains from either railroad on the LOSSAN Corridor linking Los Angeles and San Diego, though Metrolink only extends as far south as Oceanside, Calif.

Metrolink also is cooperating with the California High-Speed Rail Authority as the latter struggles to establish its statewide high speed rail system with its “blended approach,” sharing utilities and rights-of-way with existing rail operators. “So we’ve benefitted from a number of capital projects provided through them,” DePallo says, including funds for PTC, Tier IV locomotives, and the Southern California Regional Interconnector Project (SCRIPT), designed to eliminate stub-end operations and allow through-running at Los Angeles Union Station.

For city and region, Union Station, marking its 75th anniversary this year, remains a focal point for both LACMTA urban rail services and Metrolink regional rail to feed each other. And the $350 million SCRIPT project is complementing ongoing restoration of the station itself.

Designed to increase station capacity by at least 40%, SCRIPT will rearrange the track layout by expanding entry access and replacing stub-end tracks with through-running ones, aided by a loop track to allow faster access to and from points south, north, and east of the station. Construction is set to commence in 2017.

LACMTA’S Sepulveda bluntly calls the SCRIPT project “a game changer,” noting it will increase station capacity by 50%, reduce dwell times to through trains to as little as two minutes, and assist Metrolink, Amtrak, and future CHSRA trains expected to arrive as early as 2022. At present, 170 Metrolink trains per day serve Union Station, straining capacity to the limit.

It also helps unite LACMTA and Metrolink as actual neighbors and partners in progress. “LACMTA owns Union Station; we lease space from them, along with Amtrak,” Metrolink’s DePallo says. “We also let lease from them at Union Station; our headquarters is here.”

Sepulveda also cites 6.4 miles of double-track installation on the LOSSAN Corridor in the San Fernando Valley, a second platform at Van Nuys Station, and improved access to Bob Hope Airport in Burbank as three of six ongoing projects, with “seven more waiting in the wings,” all aided in large measure by Measure R funds, assisted by state high speed rail funding.

For Sepulveda, the mix of rail modes and rail carriers is a matter of maximizing “cross-pollinization” to make rail an attractive option in greater Los Angeles. Put today’s rail riders back on the I-5 Freeway, he says, “and we have gridlock. It’s that simple.”