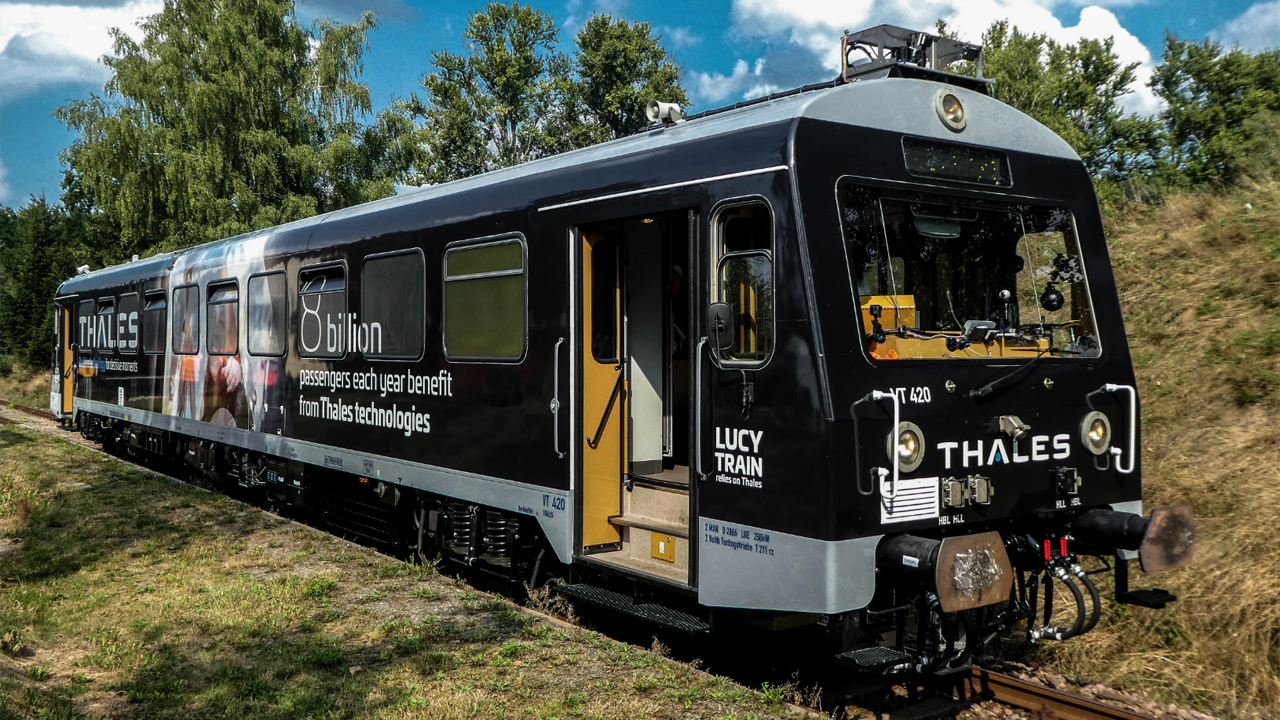 Thales’ Lucy test train is at the forefront of the company’s work on mainline automation. (Thales)

Hitachi Rail has agreed to acquire Thales’ Ground Transportation Systems business for €1.66 billon (US$1.97 billion). The deal is expected to conclude in late 2022.

Thales GTS is a global leader in railway signaling and train control, telecommunications and supervision, and fare collection. The company generated €1.6 billion (US$1.9 billion) of revenues in fiscal year 2020 and employs around 9,000 people in 42 countries. Hitachi Rail expects Thales GTS to show continued revenue and EBIT (earnings before interest and taxes) growth with the company generating revenues of €1.7 billion (US$2.02 billion) and EBIT of €121 million (US$143.45 million) in the first half of 2021.

Reports in April suggested that Thales was ready to sell its signaling business, and it reportedly approached Alstom, Hitachi, Stadler, CAF and private equity groups over the possible transaction. The report said the French firm was seeking to streamline operations and bolster the company’s finances, which were impacted by the COVID-19 pandemic.

Philippe Keryer, Thales Executive Vice-President Strategy, Research and Technology, confirmed that the company conducted discussions with key market players and has selected the “best industrial partner to ensure a successful long-term development of the Ground Transportation Systems business.” Ground Transportation Systems is part of the company’s Transport division. Thales also has Defense and Security, Digital Identity and Security, and Aerospace and Space, for which Patrick Caine, Thales Chairman and CEO, says the company is focused on delivering double-digit margins and further strengthening their market position.

Hitachi previously strengthened its mainline and urban rail signaling capabilities with the acquisition of Italy’s Ansaldo STS, which was completed in January 2019.

Hitachi says it expects the latest acquisition to drive growth by expanding the scale of its global railway signalling business; bringing an enhanced turnkey offering to new markets around the world; and accelerating development of its Mobility as a Service (MaaS) offer, a market which is expected to grow by 25% by 2025. Hitachi says that by adding Thales GTS’ signaling activities as well as expected rapid growth in MaaS and digitization of the rail sector, it will achieve revenues of €7.7 billion (US$9.13 billion) and double-digit adjusted operating income by fiscal year 2026, or four years from closing the transaction. The transaction is expected to result in run-rate synergies in excess of €100 million (US$118.56 million) around four years after closing due to the increased scale of the combined business, which will enable cross-selling to a wider customer base and improved cost competitiveness.

Thales GTS comprises four business units: mainline railway signaling, which is responsible for around 50% of revenues; urban rail signaling (20%); integrated communication systems (20%); and revenue collection systems (10%). Around 50% of the business is dedicated to digital offerings.

Hitachi says the acquisition complements its presence in Japan, Italy, Britain and the United States through Thales GTS’ headquarters in France, Germany and Canada, and will provide further access to the British urban signaling and German signaling market as well as urban rail signaling in Asia Pacific, notably Hong Kong and Singapore, and China through the Thales Sec joint venture with Shanghai Electric. Hitachi’s presence is also bolstered in North America through urban rail signaling headquarters in Canada.

“Today’s announcement marks an exciting opportunity for the teams at Hitachi Rail and Thales’ Ground Transportation Systems business to create new value for our customers, cities and passengers around the world,” says Andrew Barr, Hitachi Rail CEO. “Not only will we grow the reach of our core signaling capabilities as part of our turnkey offering, but we are also bringing together our digital and MaaS capabilities. The strong teams, customer relationships and technologies at GTS will help us grow to become a major player, further enabled by Lumada and the digital engineering of our teams at GlobalLogic and the broader Hitachi Group.”

Hitachi says employee representatives will be informed and consulted according to the laws of the respective countries throughout the process. Hitachi says it intends to promote the conditions for a smooth and successful integration and is willing to take a number of social commitments in this respect.

The deal marks another significant consolidation in rail signalling in the past decade. In addition to Hitachi’s purchase of Ansaldo STS, Siemens acquired Invensys Rail in 2013, Alstom inherited GE’s signaling division as part of the deal to sell its power division in 2015, and also acquired Bombardier’s signaling activities as part of the takeover of Bombardier Transportation, which concluded in January 2021.