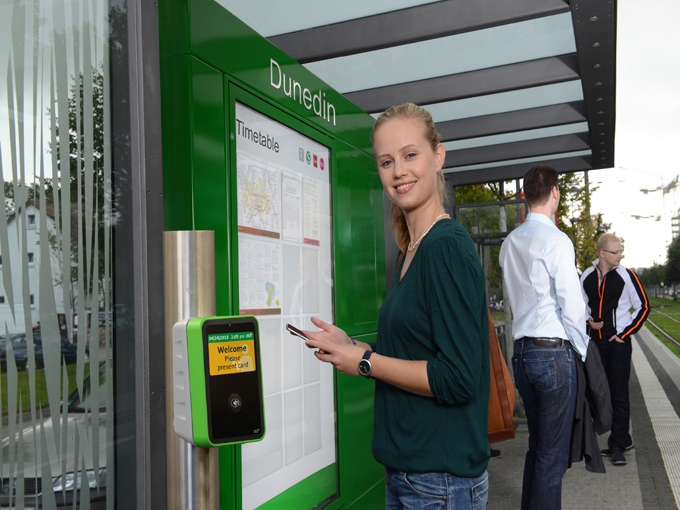 The project will be implemented in four phases over the next five years.

The initial phase will include outfitting all 550 of the agency’s bus fleet (TheBus) with proximity terminals, mobile data terminals, and routers to facilitate the validation of smart cards and electronic tickets. The proceeding phase will include equipping HART’s rail stations with more than one-hundred ticket vending machines (TVM) from INIT and nearly 140 fare gates.

HART CEO Dan Grabausakas believes “ a rail and bus integrated smart card system provides transit customers with one card that is easy to use, convenient and a modern way to ride both rail and bus.”

DTS Director Mike Fomby explains the vision of the smart card system, “The smart card pass system not only lays the groundwork for Honolulu’s multi-modal transportation system, it also helps us better meet the needs of the transiting public.”

INIT will provide the central software tool for processing and clearing of revenues. The online validation server will process account transactions in real time providing HART with accurate, split second revenue processing. Due to the software’s multi-modal capabilities, ease of use for back-end management of revenues can be effortlessly handled. With the anonymous ridership data generated by the new system, HART officials will be able to study trends and make service adjustments accordingly.

Service terminals will also be installed by INIT at satellite city halls and various retail outlets where customers can buy passes and load cards. The accessibility features of the fare system with HART’s paratransit system, TheHandi-Van, will complete phase three of the project, and phase four will be completed with a fully operational revenue service expected with full rail implementation.

The contract is valued at more than $30 million and includes 10 years of operation.