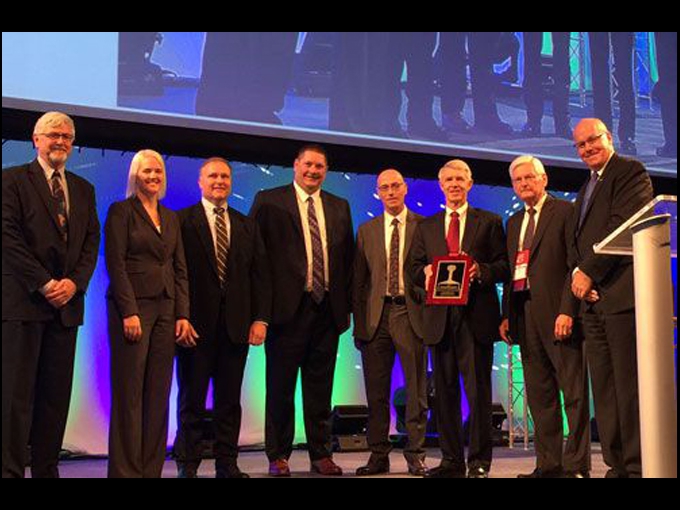 INDIANAPOLIS: At Railway Interchange 2017, the American Railway Engineering and Maintenance-of-Way Association (AREMA) presented the 2017 Dr. William W. Hay Award for Excellence to BNSF and the Washington State Department of Transportation (WSDOT) for the Improvements for Passenger Rail Service and Reliability on BNSF Railway in Washington State project.

BNSF worked with WSDOT on the line between Blaine, Wash., near the U.S. Canadian border and Vancouver, Wash., to bring improvements focused on enhancing passenger rail service and ensuring a consistent level of freight operations through the region.

The seven-year program, which included five of heavy construction, was funded largely with $800-million in American Recovery and Reinvestment Act (ARRA) High-Speed Intercity Passenger Rail funds. The scope of work was massive and included:

According to BNSF, as the various improvement projects were rolled out, BNSF’s passenger and commuter on-time performance steadily improved, particularly on the southern portion of corridor, where BNSF installed 14 miles of new third mainline between Vancouver and Kelso. Additionally, the six slope stability projects that help mitigate mudslides between Seattle and Everett will significantly enhance reliability and consistency of passenger service.

When accepting the award, Dan McDonald of BNSF noted that the relationship between the railway and WSDOT was the “most important deliverable” and without the willingness and leadership of the two parties to work together, the project would not have been a success.

This is the 19th year for the Hay award, which recognizes an outstanding achievement in railroad engineering and honors the memory of Dr. William W. Hay. The 2017 contest had three entries that were judged on three requirements: Innovation, safety and project reliability.