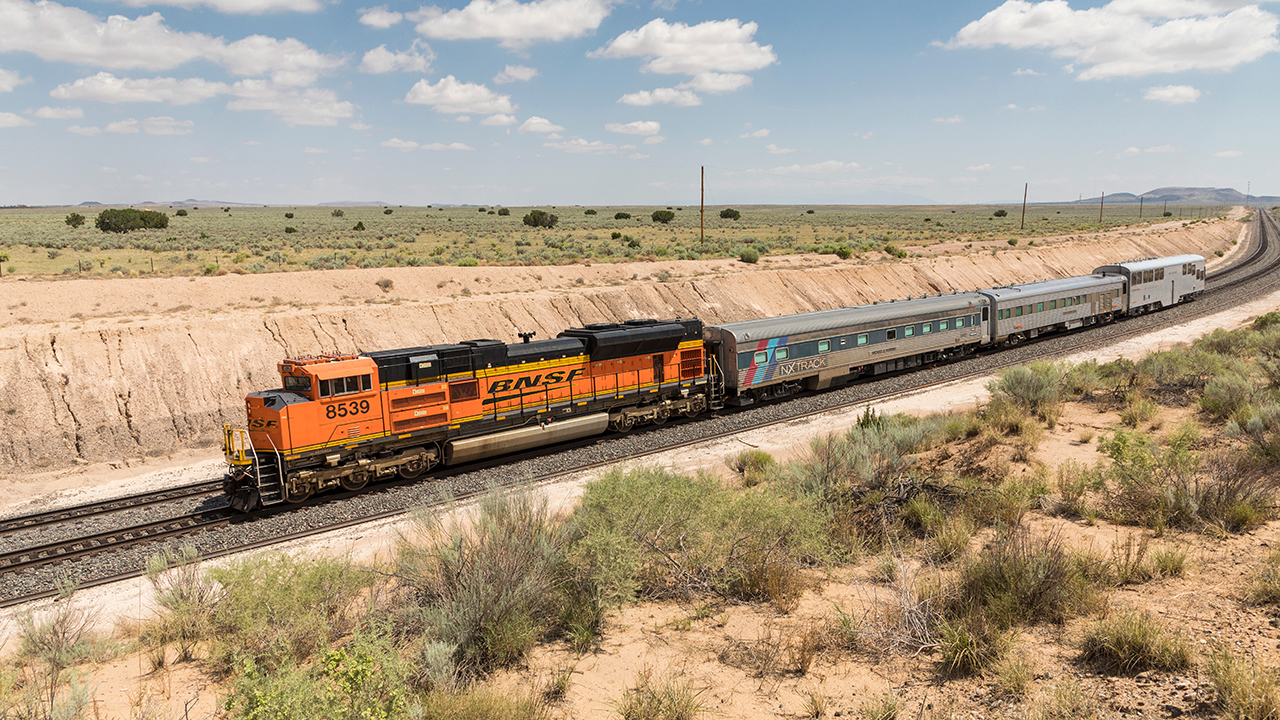 The evolution of technology for evaluating track geometry has occurred at lightning speed over the past several years. Plasser American describes this evolution as a series of transitions: from manned to autonomous geometry measurement; from data measurement to information to knowledge; and from preventive to predictive to prescriptive maintenance.

Most readers are likely familiar with the term Big Data, which is a bit of a buzzword introduced a decade ago that refers to the hardware, communication and software capabilities to handle tremendous amounts of data and enable planners across many industries to work more effectively. One of the benefits to railroading has been the move from preventive to prescriptive track maintenance. Plasser points out that assets have traditionally been used until they fail, but the “run to failure” approach is costly because it is reactive, and resources are not allocated and activities not scheduled until failure occurs. Preventive maintenance, on the other hand, is more cost-effective and extends the service life of the asset, but because of the tremendous amount of data that must be evaluated manually (and, time constraints prevent the review of much of it), this carries the risk of replacement of assets while substantial service life remains.

During the past 10 years, numerous software applications have been developed to enable Big Data analytics to evaluate information from different sources and provide recommended courses of action, known as prescriptive maintenance. These software applications allow statistical data analysis, image processing, model-based simulation, deep learning and rule-based activity selection and scheduling to review data automatically, identify issues and estimate time-to-failure, and issue work orders that can be reviewed by an expert. This overall process, including the individual components, is also known as artificial intelligence (AI).

While leveraging Big Data analytics has been the key development in evaluating track geometry over the past several years, there are several, less complicated developments that have also raised the bar for those involved in this arena. For example, most are familiar with Holland Rail Engineering’s hi-rail TrackSTAR® vehicles that include a Gauge Restraint Management System (GRMS), which measures track strength under dynamic loadings. The system takes an unloaded measurement at the front of the vehicle, and a loaded measurement taken at the split loading axle, which delivers a vertical and lateral load that locates the weakest track locations. 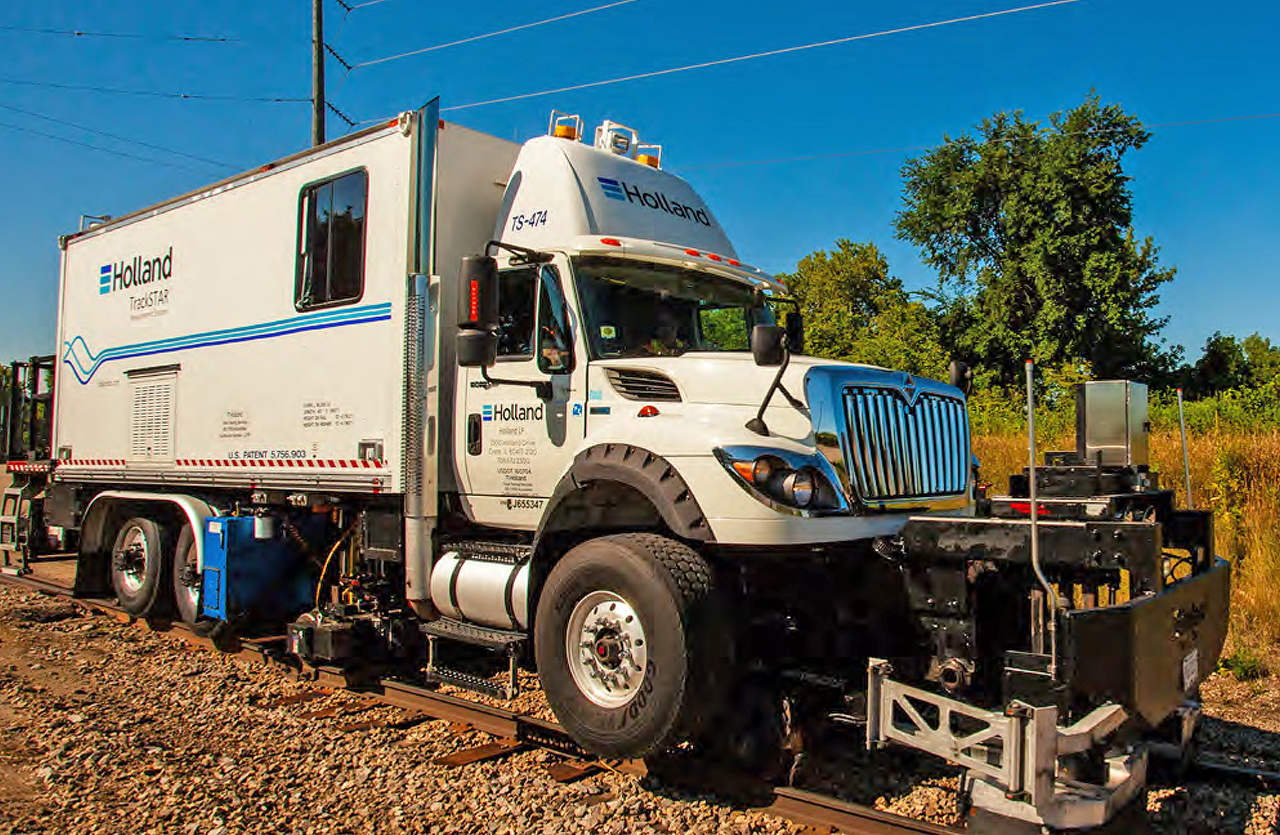 Holland recently developed a smaller version of its hi-rail geometry vehicle, the 850-series (400-series pictured, above). This TrackSTAR® vehicle features a loaded-gauge, split-axle system that applies a consistent 2,500-pound lateral load to the track to look for gauge-widening and broken spikes. This vehicle is designed to supplement testing done by rail-bound track geometry cars, and a key benefit is that one operator can complete the measurement. This vehicle also includes Holland’s patented Argus® system, which measures and calculates geometry parameters and generates exceptions in real time. One Class I research and test engineer said that he had been waiting for 10 years for a hi-rail vehicle like this, and that he determined the gauge measurements on curves made by the Holland truck were identical to those made by the road’s large geometry car.

A historic problem for analyzing track geometry has been getting track time to deploy rail geometry cars and hi-rail vehicles. Since it’s difficult to hold traffic on a busy main line to make way for geometry evaluation, the industry is increasingly using crewless, autonomous geometry vehicles that can be part of regular freight train consists. Several Class I’s are using Ensco’s Autonomous Track Geometry and Rail Profile Management System, built into a modified boxcar. 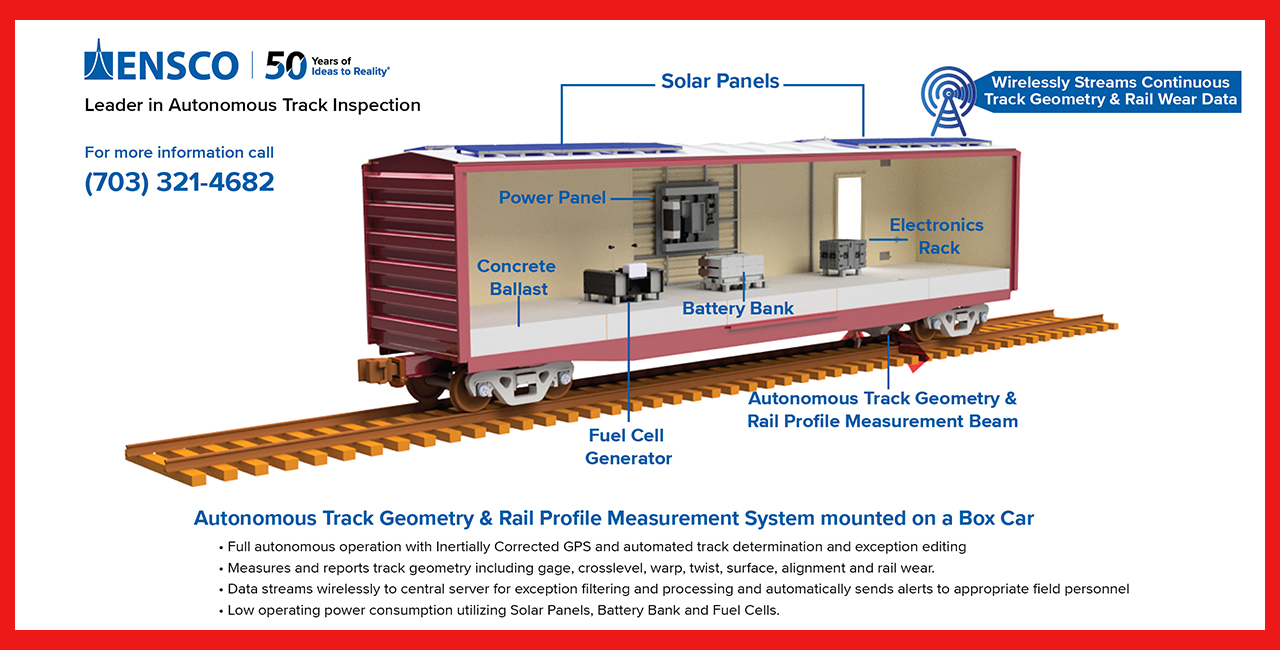 Ensco’s autonomous boxcar operates in regular freight trains, evaluates track and provides exception editing. Geometry parameters assessed by the car include gauge, cross-level, warp, twist, surface, alignment and rail wear. The car has concrete ballast, and solar energy, batteries and fuel cells power the onboard equipment. A beam from the bottom of the car provides data on track conditions, which is communicated wirelessly to headquarters in real time. Nearly all of the Class I’s have deployed this type of car, which is managed by the railroads’ geometry departments. The number of defects found and corrected on the national rail network has increased significantly, as much more track evaluation occurs at any given time.

Autonomous cars are supplementing the work of crewed geometry cars. The traditional geometry car is usually a train that includes a locomotive, an equipment car to gather the track data, and a coach car with computers, printers and viewing screens so engineers can monitor track conditions as the train travels along its route. Crewed geometry cars can also be single, self-powered rail-bound cars, but while these are common in Europe, they are rarely, if ever, used in North America.

BNSF Assistant Vice President and Chief Engineer for System Maintenance and Planning Matt Hammond says, “BNSF leverages both [crewed] and crewless geometry cars to supplement visual inspections on our network. We currently have three crewed and two [crewless] geometry cars, and we expect to expand our use of autonomous geometry cars by exploring emerging technology to augment optical inspections.” Hammond adds that “BNSF has both hi-rail and rail-bound vehicles for track geometry testing. We generally use rail-bound cars for inspection on the main line and supplement them with geometry hi-rail trucks. Hi-rail geometry trucks are primarily used to inspect our yards, industry tracks and crossovers.”

During the past five years, software and hardware for track geometry evaluation have made significant strides. “BNSF has developed predictive tags and alerts based on the data collected from geometry cars,” notes Hammond. “Once that data is sent back to our geometry team, it leverages artificial intelligence to effectively analyze the hundreds of millions of bytes of information that help drive our track maintenance. A tagging system, for example, is used to identify track conditions. A yellow tag is a ‘warning.’ Now, with AI data, we can predict which of the yellow tags have the highest probability of turning into red tags—track needing immediate attention—within the next 30 days. Today, we classify them as orange tags, elevating the need for maintenance before the track is taken out
of service.”

BNSF is also a proponent of what’s called “performance-based geometry testing.” This testing captures scenarios that involve multiple factors in track geometry that could lead to a derailment in a particular situation. This level of testing is in addition to the Federal Railroad Administration (FRA)-mandated evaluation. Says Hammond: “BNSF applies a wide variety of technologies to test for FRA-regulated defects. We also test for additional defects to enhance the safety of the railroad and leverage both [crewed] and [crewless] geometry cars to measure the performance of the track under operating conditions. Geometry cars allow us to precisely measure the health of the track while under load and at train speed. By adding geometry car inspections, BNSF can enhance inspection efforts on areas where there may be condition-based concerns as a result of heavy loads while also performing federally mandated calendar-based inspections.”

Maintaining proper track geometry will always be important to safe railroading. The innovations in just the past five years have been phenomenal. It’s worth noting that machine vision systems are becoming much more common on geometry cars, both the larger and smaller ones. Who knows what existing technology, including technology yet to be developed, will offer those charged with track safety and efficiency in the next five to ten years? Advances in Big Data analytics will increase the industry’s ability to establish prescriptive maintenance programs, but, for the time being, at least, human verification and approval of the prescriptive information will be required.